This year the NEMHF has an obvious leaning towards legendary bands from the Northeast, but none are more legendary in the area than Sam Black Church. Formed in 1988, the band rose to popularity in the 90’s thanks to their batshit nuts live shows and unique and revolutionary infusion of extreme metal and brutal hardcore. Often known as one of the greatest bands to ever come from Boston, they took an extended hiatus in 2000 only to rise again for a reunion show in 2007 and again in December of 2013. 2014 sees them celebrating the success of their crowd funded documentary Leave Behind A Groove In The Earth and part of the celebration takes place at the NEMHF for only their third show in 14 years.

Tell me a little about how the decision to reunite and start playing shows again came about.

Ben: It came out of the blue, really.  The chance to open for the Mighty Mighty Bosstones was offered, and we all just thought ‘Yes.  Sure!  Why not?’  I guess the time just seemed right for us.

J.R.: We had already discussed doing some shows to support Duncan Wilder Johnson’s documentary about the band, Leave Behind a Groove in the Earth, but nothing was solid. Then our old friends, The Mighty Mighty Bosstones, reached out to us to about reuniting to play Hometown Throwdown #16. It seemed to all of us that it would be the perfect warm-up. Ever since the decision to play that show, offers have been coming in. We have always loved playing the Palladium and the Metal Fest, so it seemed like a no-brainer. We are looking forward to it, and to playing some shows in the fall to support the documentary.

Should this be considered a full reunion with a new record and tour and stuff, or will there only be a handful of shows?

Ben: There are several ‘things’ percolating for the band at the moment.  However, a ‘full reunion’ would be really hard as we are scattered all over the fucking place (living in MA, VA, and Berlin, Germany).  We are operating in one-step-at-a-time mode.

J.R.: Only a handful of shows. We have been throwing around the idea of recording a bit, and one song has been written, but no decision has been made regarding specifics. On one hand, we can say it isn’t a full scale reunion, but then again, we never really “broke up.” VERY extended hiatus, or retirement, might be more accurate. We still enjoy each other’s company and playing together, very much.

Were you at all surprised to see how supportive and excited fans were that you’d be reuniting after all these years?

The best part of the reunion in December was getting to talk with people who had been waiting for us to come back, people who had important memories that we were a part of.  It was really humbling and amazing.

J.R.: We were more reticent going into the reunion show at the Roxy in 2007. In that case, we have very little social media, and we hadn’t played together, or very much individually, in seven years. We really didn’t know what to think. But, when the show sold out so quickly, we knew it would be great, and that we had to bring it. This time around, there was better planning, and we were all in shape musically. Plus, opening takes a bit of the pressure off. Nonetheless, everyone involved was fantastic, from the Bosstones, to our stalwart manager, Sean McNally, our old road crew, the staff at the House of Blues, and especially the fans. It was a pleasure all the way around. Although, the guys being together again produced more than a few hangovers; par for the course.

What are your thoughts on being labeled as one of the greatest bands to ever come from Boston?

Ben: That is very VERY flattering.  Boston has been the home to so many incredible bands, and there is no shortage of bands in our ‘aggressive’ musical family that I consider to be world-class bad-asses, from many decades and continuing to the present day.  The fact that we come up at all in this kind of discussion blows my mind- in the best sense!  I was going to list some bands here that I consider vital and great, but it quickly turned into a book.

What we have come to conclude is that we were the right band, doing the right thing (heavy, energetic, positive, over-the-top cacophony (laughs) at the right time in our city’s history (mainly the 90s)- the environment was accepting of a bunch of guys killing themselves to super distorted, fucked up, intense cross-over, and our ‘status’ is really a by-product of the connections we made with people.  Basically, take the ‘scene’ and fans and shows out of the equation, and Sam Black Church is not the same thing, at all. To sum it up, it is fuckin’ awesome!

J.R.: It is humbling. It is very nice that people include us for consideration among so many incredible bands. We have always been fans of and supported the Boston scene. Perhaps the real consideration should be Jet as one of the best front men ever, anywhere.

Do you have any special plans for your setlist for the NEMHF show?

J.R.: The set opening for the Bosstones had the limitation of time, and so does this show, to a lesser extent. We have definitely been making a short list of deep cuts, and I’m sure some of them will make their way into the set. Who knows?  There might even be a new song. 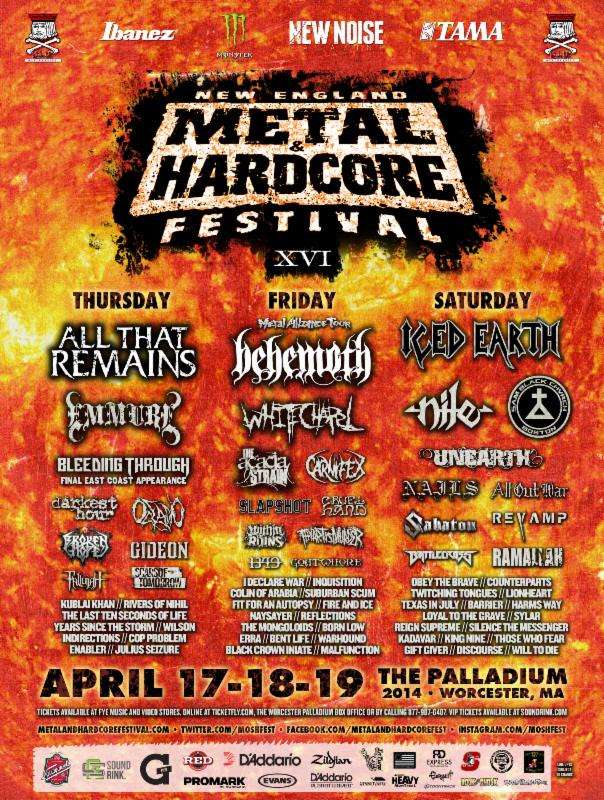 PrevIced Earth: An Interview with Vocalist Stu Block
Conan Talks About Their New Album’s Massive Tone and How It Came TogetherNext