Interview: Sandrider Talk About Their Transition From Akimbo to Sandrider

Sandrider are one of, if not THE heaviest, loudest, and balls-y-est rock ‘n’ roll bands in the Pacific Northwest. Seriously, it’s absolutely insane that three people can make as much noise and sound as gigantic as they do. They are also kind of a tease, as they don’t really play much outside of their home city due to the inevitable demands of adult life. All this made it that much more special when I finally got to see them. I just recently moved to Portland from the Bay Area (wayyyy out of bounds for Sandrider), took a Bolt Bus 3 hours to Seattle, and another bus half an hour to the venue. I was a little bit worried that after such a journey I would be slightly underwhelmed due to soaring expectations, but seriously, it surpassed every little expectation I secretly had. Completely and utterly flawless. I even got an impromptu fist bump from Jon right after the last song of the set. I left the show with a huge 6-year-old-kid-walking-out-of-a-candy-store-with-a-heavy-bag-in-each-hand kind of smile. Oh, also, they have a new album out called Godhead, and you should definitely listen to it.

After having been in Akimbo with Nat since the late 90’s, you guys recently dropped that project and started Sandrider. How did you guys decide to undergo that change?

Hmm… I guess the answer to that is no answer. There wasn’t really a conscious thought process or state of being. It was a very natural transition. Akimbo stopped playing and The Ruby Doe stopped playing right around the same time. We’d been doing Sandrider for two years or so before that and we already had the first album recorded at that point, so by the time Akimbo ended we already had that first record out and people were liking it and it was just a very natural transition between bands. It definitely helped with softening the blow of Akimbo ending. It was kind of sad, bittersweet I guess. It felt right putting it to rest, but it was just nice having an already active project like Sandrider going.

So as one of the members that brought about that change, what would you say are some of the fundamental differences between the two bands? 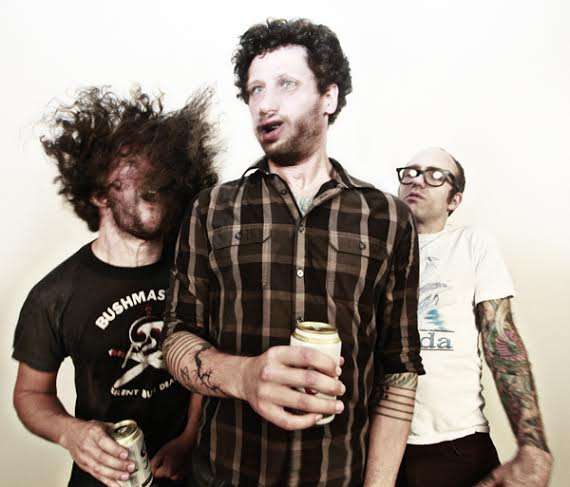 Well for me the biggest difference is that I play guitar instead of bass (laughs). And I mean, you can write similar stuff on guitar and bass, but just the way it comes out for me is different, so I guess my song writing process is a little bit changed… Definitely trying out some different things vocally in Sandrider. Other than that the differences are pretty nuanced. I think people who are super familiar with metal and rock and sub-genres would be able to point out a couple key things, but if you took your average person off the street and asked them what the differences were they probably wouldn’t be able to come up with much. For me it’s not that different though you know… It’s still got that release, and sort of like primal energy to it, which is what I thrive off of as far as the songs I want to write and the music I want to listen to.

So now that you’re playing guitar, do you think the songs you’re writing are a more accurate representation of the music you want to make?

I don’t think “accurate” is the right word. It’s just different. I mean they’re definitely different moods for me. There are definitely times where doing something more aggressive and explosive like Akimbo feels better. Sometimes it feels better doing something more locked in a groove and a little more like it’s got that Van Halen party rock ‘n’ roll vibe to it that Sandrider does, but its just different moods.

I’ve been wanting to see you guys for a while now, but it’s super hard because it seems like you guys never really play outside of Seattle.

Do you guys have any plans lined up for Godhead?

No, we don’t have any tour plans… Akimbo toured non-stop and since then we’ve all sort of let life happen and it’s just not really in the cards for us right now. I have a career that I love and I can’t take too much time off of it. Jesse, our bass player, just opened up his own tattoo shop so now he’s responsible for a whole shop and crew of people. Nat is about to start a family, so yeah were kind of land locked, and you know it’s fine it doesn’t bother us, things are going well here in Seattle, we like it here.

Do you feel like being in a different space as a band has any kind of effect on the music you guys make? Now that you guys have figured out how to maintain a band without ignoring or detracting from other aspects of your professional/home lives as opposed to relentless touring and 100% commitment to your band.

Good question… I don’t know (laughs). I don’t think so… At least for me when I write music it’s always a very uh… primal is a cheesy word, but it’s like whatever I’m feeling at the moment. All of my favorite songs that we’ve written are not songs that I’ve labored over for a long time there just songs where I get hit with an idea and I grab my guitar and I play it out and its messy and kind of sloppy and it just sort of happens. That’s definitely been the Sandrider writing process.

How have you guys felt about the general reaction to Godhead so far?

It’s been incredible… It’s blown me away. We’re already sold out of the first press. That never happened in Akimbo. At the release show people were screaming the words. I just said we don’t tour, but we went up to Canada recently, we got flown in for some shows, and the people up there were singing along while we were playing and we had never played those songs up there before, so yeah it’s been incredible. I’m flabbergasted really (laughs).

So what is the significance behind the name Godhead? Someone wrote a review it online and said it had something to do with early Soundgarden. 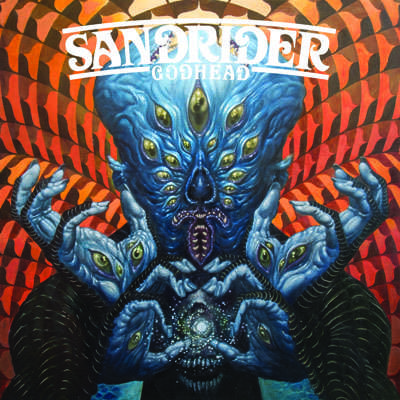 I’m glad you asked that. Actually it has nothing to with early Soundgarden. We had no idea. When Soundgarden originally signed to Sub Pop, one of the guys that worked there coined the term “Total Fucking Godhead,” to describe their sound. Us using Godhead had nothing to do with that (laughs) and we had no idea that was even a thing until I read that review, and I thought that was awesome, ‘cause I mean Soundgarden is obviously a big influence on our music. But yeah, the title actually has nothing to do with that. Actually, I have to confess, I did not want to title the album and I didn’t want to put our name on the cover, I just wanted it to be a painting and have the art define the record, but obviously that didn’t end up happening. We ended up picking one of the songs from the record to be the title, so we chose the one that Jesse (who did that album art) based the piece off of. And in this case, “Godhead” is a reference to the fourth book in the Dune series, God Emperor of Dune. The main character in that is a half man half sand worm who knows everything that has happened and everything that will happen. He’s a central character in that book, and it’s a really great book, and that’s what inspired the songs.

Considering how your first album was really intended to be a demo, would you say the studio experience for Godhead was more focused or serious?

A little bit, but when we go in the studio were pretty focused regardless of what were doing. Were very business oriented, we don’t fuck around, we know exactly what were going to do. There’s not a lot of experimenting going on, we go in with a pretty solid blue print and we work pretty fast. Because you know, time is money in the studio. It’s pretty expensive.

The way I found out about you guys was by reading an interview with Scott Evans from Kowloon Walled City where he name dropped you guys as one of the bands he was into at the moment. Since he makes amazing music, I decided  to see what you guys sounded like, and I’ve been listening to you guys constantly ever since. So, for the sake of music hungry people out there who really like you guys and want to check out some new stuff, what are some bands you’ve been stoked on recently?

Awesome! Yeah, let’s see I recently discovered this band O’Brother, because The Sword is taking them on tour and The Sword are good friends of ours from Akimbo. Usually when friends bands take other bands on tour I’ll check them out, and O’Brother is really good. They’re sort of dark, weird, melodic, and heavy and pretty at the same time. There’s a local band here called Glose that’s really, really good. The guitarist of Jessie’s old band, The Ruby Doe, starting playing with them and they’re really awesome. There’s a band called Caligula that’s got Burk, the old guitar player from Akimbo who is playing bass in that band. All the bands on Good to Die are excellent. Gaytheist is great. Deadkill just released a new album, which is awesome. I was just at their album release show. Oh, and Dust Moth is a band that’s really good that I think people are going to start paying attention to. I found out about them because Matt Bayle is actually playing with them and he let us hear one of their songs and we had them play our record release show and they were really good. 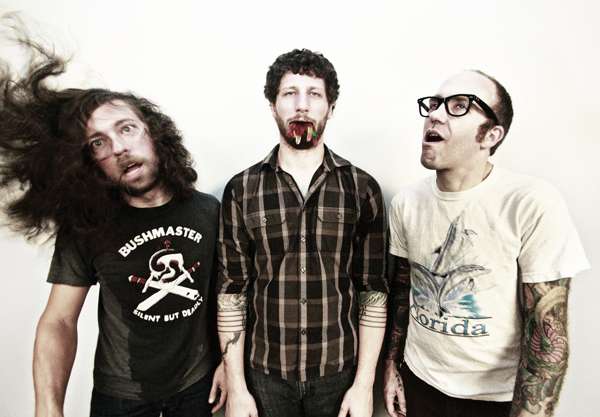 PrevInterview: What Would’ve Happen If Taking Back Sunday Didn’t Go Back To Original Lineup For ‘Happiness Is’
Interview: Black Map Talk About The Origin of Their Name and Plans For a Full LengthNext