Save Ends
Interview with guitarist Tom Ciesluk
By John B. Moore

Thanks to a shared love of Dungeons & Dragons and punk rock, the world now has another Boston band to root for.

Save Ends was cobbled together three years ago from ex-members of No Trigger, Rotary and Making It Right, but go ahead and ignore your preconceived notions of what these guys are bound to sound like. It’s less melodic hardcore and more emo-like rock with smart lyrics (the Saves the Day and Get Up Kids catalogues probably get regular rotation in the van).

The band recorded a 2012 EP, but has signed with Tiny Engines and is heading into the studio with producer Jay Maas.

Congrats on signing to Tiny Engines. How did you guys first connect with the label?

Thanks!  It was your classic fairy-tale story of band has a Tumblr; awesome label guy stumbles across said Tumblr; we all live happily ever after.  Thanks Internet!  We actually started working with Beartrap PR, the PR company run by those dudes, first (Editor’s note: those dudes are Chuck Daley, Will Miller and Jeff Meyers).  Once we were finally ready to do a full length, we joined the supremely awesome T.E. roster.

Had you been actively looking for a label for a while?

Yes and no. We started this band, have been doing this band, and continue to do this band to put out the most awesome music we can and have as much fun doing it as we can. Once we realized that we REALLY wanted to put out some vinyl that is when we started thinking it’d be awesome if there was some label somewhere that would help us do that. Eventually we started talking to Will at Tiny Engines and that goal became a reality.

How did the band first come together?

Dungeons & Dragons. No, really.  Brendan (Cahill, vocals), Christine (Atturio, vocals and guitar), and Sam (Nash, bass), were all in a band called Rotary for quite some time. While that band was going on, I started hanging out with all of them on a regular basis. Immediately, we discovered we all shared a love for all things on the nerdier side of life. It was only natural that we started a Dungeons & Dragons campaign together. That went on for a few years and then Rotary disbanded. Around time same time, I left No Trigger to join the stupid corporate world. Soon after, we all started playing music in Brendan’s basement together. Out popped a band. After two other drummers, we finally stumbled on the great and powerful Burton (Wright) and Save Ends really started to take shape.

Those coming across you guys thanks to the No Trigger connection are bound to be a little surprised. What musical influences do you all share?

I think that 7-8 years ago people may have been more “surprised” than they are now by that No Trigger connection. “Back in the day” punk was punk, hardcore was hardcore, indie rock was indie rock, so on and so forth. I think nowadays the lines are all blurred and people’s tastes are all over the map. You can walk into a Lucero show, see a dude in a Tegan and Sara shirt with a Strike Anywhere tattoo, and strike up a conversation about some Tragedy show you both were at ten years ago. That’s just what the internet, places like punknews.org, and things like Spotify have helped to evolve. As far as our band is concerned, our influences are all over the map. You can draw out the obvious Get Up Kids and The Anniversary influences easily. Jade Tree Records’ emo, Vagrant Records’ pop punk, Descendents, Iron Maiden, Lagwagon, Rainer Maria, Motown, Nirvana, Bad Brains, and the 90’s.

You guys are going to be working with Jay Maas. He obviously is known for producing a harder sound. What was it about him that made you want to work with him on the new record?

I got to work with Jay on a No Trigger EP and it was a blast. He knows how to craft an awesome recording. Our buds in Great Lakes U.S.A. recorded their most recent full length Live Fast, Die Whenever with him and it sealed the deal. Once we got in touch with him Jay mentioned he would be super excited to record a band like ours. We were sold on the idea from the get go. We can’t wait to see how it turns out!

Are you going into the studio with all of the songs written?

Definitely!  We’d all be way too scared to go in there without at least having all of the songs written. Of course, we’ll probably add cool stuff in the studio like enormous bass drops, robot voices, reverse vocals, harpsichord, and police sirens. The songs themselves, though, are ready to go.

Along with recording, what else is the band doing this year?

Well first, our D&D characters are probably going to hit level 21 (Epic tier for you nerds out there) soon, so that rules. We’ll be playing nine million shows hopefully. We are looking to do as many small tours or weekends as possible. The other thing we are REALLY excited for this year is The Fest 12 in Gainesville. We got invited to play this year and that is going to be an absolute blast. It is going to be a four day fest for the first time this year, which means even more awesome bands playing than ever before. We are all regular annual Fest-ers, so playing it this year will be supreme. 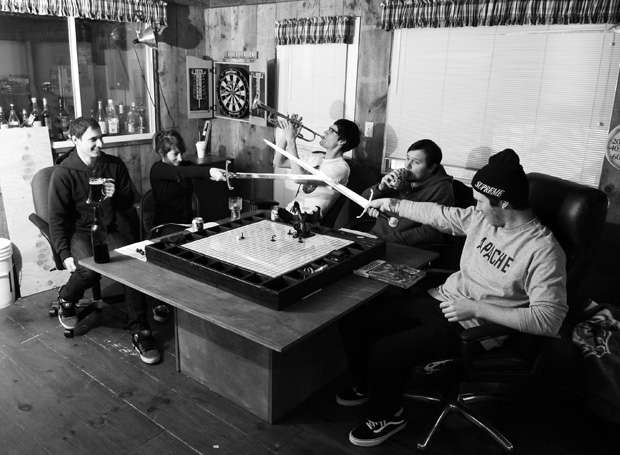