On a rare day off from recording other bands (Alex Estrada’s day job) and working with his own band, Silver Snakes, Alex talked to me about their sophomore release, Year Of The Snake, out March 4th, and much more.

I got to hear the record and I never heard the previous one Pictures Of A Floating World, I saw the press release had a quote from you saying you don’t like to do the same thing twice and that you felt this one was heavier and darker, so was it a conscious decision or just what came out?

It was just a natural progression of things. The first record was, you know like most bands when they do their first release they spend several months or even a year just writing and preparing and just really establishing the direction they wanna go in and with the new one I just wanted it to be purely based on instinct. I had some songs written and at the last minute just ditched them all and started from scratch and rewrote the whole record in six weeks and just kinda let it come together just the way it happened. I listen to a lot of different kinds of music, worldly music, and I didn’t try to stop anything from leaking its way into the new songs. I listened to a lot of Native American music predominantly. That’s one thing that really influenced the new record. You might not hear it right off the bat but rhythmically it was a huge influence. Just little things like that. I didn’t wanna shy away from that. It feels very natural to me. When we all listen to much darker, moody and heavier music and it comes across a lot on this record. You’ll definitely hear the difference if you go back and listen to the first one. The first one’s much more upbeat; it still has the edge to it but it’s not half as dark as this new one.

You write everything, lyrics, music?

For the most part. Having the studio, my life is constantly revolving around music so I kinda have that luxury to be able to just write songs all day every day if I need to and just get away for a while. I drove up to the mountains and locked myself away for a few weeks and started writing music for the record and came back and kept writing. I would just constantly bring ideas to practice and everyone would bounce ideas off each other. Lyrics came last, but there is kind of an overall theme to the record lyrically. It kinda all fell into place. There wasn’t too much of a worry.

What would you say the theme is? 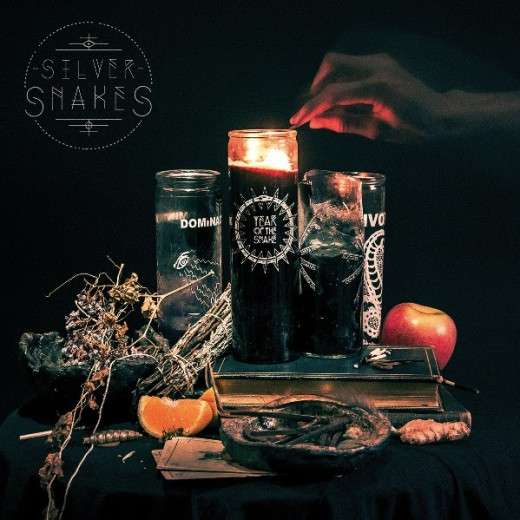 The record’s called Year Of The Snake and it’s called that because I wanted it to represent the 12 months in that year. We finished the record halfway through the year so half of it is based on the experiences in the first half and the second half of the record is based on predictions for the second half. Like how I thought my current situation would be a few months from then. That’s pretty much what it is. As much as I elaborate on things and I like to be really vague with lyrics and use a lot of metaphors of course, everything is based in fact and truth of what I was doing at that moment or how I expected things to turn out a few months from then.

About the 7” you did with Bridge Nine you had “Sundance.” That was one of the first songs you wrote?

Yeah, “Sundance” is actually the first song that was written for the new record. That was the only song that in its entirety musically that I recorded up in the mountains when I first started writing. Three of the songs on the record were written in that first week and then the rest of them were written literally a month before we recorded the album.

What were the other two?

“All Your Eye” and “Red.” That was November 2012 and then the rest of it was written six weeks before going into the studio. I had almost 20 songs written and scrapped them all.

The reason they’re like that is ‘cause the way I wrote them up in the mountains musically I felt those tracks really flow well into each other. I wrote them all in one session in one day. I really wanted to make sure that the finished product of those three came across the same way they were born.

The record sounds pretty diverse. Was it tough to piece the rest of the record together track-wise?

As far as sequencing the record not really because what helped was as soon as the first song “Four Crows” came out, it was the shortest song and the most high-energy, driving song on the record so right off the bat I wanted to make that track one. As soon as we came up with a song that we knew would be good to close it with then filling in the pieces for the rest wasn’t that hard. We really kept the vinyl in mind, how we’d want each side to start and finish and then having those bookends set already really helped everything fall into place.

How’d you get with Bridge Nine in the first place?

Honestly it was kinda just an organic process. They approached us and we’re obviously familiar with the label, they’re a very well-respected label in the hardcore world. That’s not exactly what we’re doing but we’ve toured with Defeater and [they] had great things to say about B9. It was definitely just the next step for the band. It’s easy to get lost in the shuffle these days. The more rock-oriented bands are starting to come back more and a lot of people are doing the whole ‘90s thing now. It seems to be a thing and I have no desire to do what everyone else is doing; it’s just who I am. I don’t wanna be a part of that big crowd so I felt like going with a label like B9 although it’s different for us, it’s just better in the long run. It’s people who are passionate about music and they have a lot of hardcore bands they work with and then they have a few non-hardcore bands and a band like us would have different opportunities present themselves through the label that they might not be able to take up with one of their heavier acts. So it was kinda just a conscious decision to go with that to not [go] with a label that was already dealing with bands in a similar style to us. At SXSW we met the people who run B9 and they were awesome.

So you met them last March.

Yeah, 2013. They asked us to play the B9 showcase. We were the only non-B9 band that played it I think. We talked to them after the set and they said they loved the band and a few of the people behind the label have come to see us at separate times when they’re in town or when we played Boston last year. It all worked out. We’re really happy with that move.

Well, obviously they liked you. [Laughs]

You never know what to expect. You just hear yeah this is a hardcore label that wants to put out our record and I didn’t know what they were doing with Lemuria and Polar Bear Club and stuff like that. I’m the worst person when it comes to staying in the loop with what’s current with music. I just pick up what I pick up when we’re on tour. Once I looked at the catalogue and saw they were working with a pretty diverse roster it really made sense.

Yeah, when you used to think of B9 you’d think of all old hardcore like Underdog and DYS… so that’s awesome to be on that label.

Exactly and that’s what’s funny. We all come from a background of playing in heavier bands. Before I sang in this band me and our drummer [Daniel] played in a doomy metal crust-punk band and we did that for many years. We used to play shows on the floor and in DIY spots. So bringing that mentality and work ethic into the world we’re now surrounded by has really helped us. It really kept things in perspective and pushed us to work a certain way.

And how did you get into the recording side of things? Just from playing?

My dad’s a producer and a musician. It’s in my family, seven generations of musicians on my dad’s side. Pretty crazy. I grew up in recording studios. I grew up watching my dad produce records and writing movie scores and all that kind of stuff. It’s just something I’ve always been around. I started out with a lot of his hand-me-downs and after a while I opened my studio in 2005 and that’s all I’ve been doing ever since.

This time around, you recorded your own record. How is it different for you working with your own band as opposed to doing other people’s stuff?

It wasn’t as nerve-wracking as I thought it was gonna be. I was really nervous because I thought it’d never get done because I’m gonna be too much of a perfectionist with everything. The way I approach bands that I work with I just really wanna capture the band for what they are. I don’t try to make anyone something that they’re not. I kinda just went into our record with that same state of mind. Like I said the record was so on instinct so we just played the parts that felt right and we kept the performances that felt right which in most cases were the first ones. We left a lot of little things in there; there are a lot of quirks on this record, especially vocally. Recording my own vocals, I’d just hit record and start singing. At the end I’d be like this part isn’t perfect but that’s how I sing it, that’s how I sing, just roll with it. Fortunately I didn’t have to mix the record. That’s where the big headache would’ve been, so I really lucked out with that one.

Do you think any of the [songs you scrapped from the first session] you might bring back one day?

Maybe bits and pieces. It was kind of in a different direction. Like how I was saying when a band does their first record there’s this preconceived notion of what they want and the style they’re going for. I felt like I was kinda doing that with that batch of songs. I was going for this─ I don’t wanna say industrial but this really… to say the least I was listening to a lot of Nine Inch Nails and stuff. After a while I’m like, “I’m out of my element; this isn’t coming together the way I’d like it to.” I went back and thought why am I trying to force something just for the sake of doing something different? I compiled some of those demos together and made one 30-minute track of all them spliced together. Maybe one day I’ll put that up online.

I got the idea from this old band from the ‘90s put this 25-minute song together that’s just like 70 to 80 different snippets that never made the cut. It’s a little tribute to them.

You gotta put it out on some limited vinyl pressing. [Laughter]

It’d be the most annoying sounding record.

For the true fans, right.

Definitely one of those.