Interview: Somos Talks About Moving Back To Boston & Recording ‘Temple of Plenty’

Interview with guitarist Phil Haggerty | By John B. Moore

The latest signing for the burgeoning indie punk label Tiny Engines is a no-frills indie band stripped of predictions and pretension. Somos, though raised on hardcore and pop/punk, is none of those things, but rather a solidly lo-fi outfit that puts more emphasis on songs over attitude. Their fantastic debut, Temple of Plenty, made a valid argument for inclusion on Year End Best Of lists across genres.

Guitarist Phil Haggerty spoke recently about the band’s start, moving back home to Boston and recording Temple of Plenty.

Can you talk about how the band first came together?

The concept of the band actually dates back to 2009, where me and an old friend of mine were talking about starting a band that reflected our new tastes in music as we started listening to less and less hardcore. We mentioned our mutual friend Mike (Fiorentino- Vocals and Bass), and how it was weird he wasn’t in a band, as he was a great singer and had done some awesome backup vocals in our old hardcore band. We gave him a call that same day and we jammed that night. We didn’t do much after that, we all had different post-high school plans at the time, but Mike and I linked up and we kept writing and talking about the band for the next two years. We demoed a couple songs when we could, and eventually took the concept of the band out to San Francisco, a seemingly perfect fit for our band. Thanks to our drummer Evan (Deges), we were able to get into the Panda Studios to demo our first four songs. For a variety of reasons, we decided our home state of Massachusetts made more sense. Once in Boston, we added our old friend Justin (Hahn) on second guitar, and Mike Benoit on drums. After parting ways with Mike B, we called Evan and he instantly told us he was down to rejoin. He wrapped his life in San Francisco in a matter of weeks and drove across the country to move to Boston and focus on building Somos.

How long have you been working on the songs that made it on Temple of Plenty?

Songs like “Dead Wrong” and “Lives of Others” are the newest and we actually wrote right before we went into the studio. The oldest song on there is “Before You Merge” in which early versions of that song we demoed in San Francisco in 2011 but didn’t end up making the 2012 Demo. “Domestic” was the first song we began working on the East Coast, which started with Mike and I on acoustic guitars in our Allston apartment in the summer of 2012. But most of the songs were written between the fall of 2012 and the spring of 2013. There were also a lot of ideas and songs that for one reason or another didn’t make the cut. We work hard on songwriting and definitely need to sit with our ideas for a while before we decide if we want to go with it.

What made you decide to record this one in New Jersey?

We had just heard so many great things about Jesse Cannon. He had worked with Saves the Day, The Cure, The Menzingers, Transit, Man Overboard, the list goes on and on. Another thing was that he’s extremely knowledgeable on the new state of the music industry and how much it’s changing. He has this way of making a small band like us feel empowered to put forward our concept, while also using his knowledge and experience to challenge us in constructive ways.

Your music is not easy to categorize. Do you guys share similar musical influences?

Yes and no. There are definitely a lot of groups that we connect on, and we have similar backgrounds as far as what first got us into music in middle school and high school, like ‘90s punk, pop-punk, hardcore, etc. Since then our tastes have grown a lot. I think we are a lot more conscious of good songwriting and groups that are taking risks and trying to do something new. Our tastes are so broad that it’s kind of hard to list. I think one thing we are grappling with right now, is how to attain a “modern” sound without going the cheesy/artificial route. I for one do not like to get pigeon-holed into being a “90’s band”. One thing we said a lot while recording was that we very much wanted this record to sound like a record from 2014.

How did you first connect with the folks at Tiny Engines?

It’s actually a really boring, yet cool story. They e-mailed us, saying they liked the demo and asked us to send them some of our new songs once we got some rough mixes. Seems like they dug them right away because it wasn’t too long after that we got the vibe they were going to put it out, which was so awesome for us. We’ve been all been in bands for a while and never had any kind of real label support. It was a great feeling. The cool about the story for me, was that they had called some of the promoters that had booked us to check up on our live show. There was one weekend we did where every city we hit, Will (Miller, label co-founder) had contacted someone to see how we were. The reason this blew my mind was because there were nights where we would be playing for 10 people or less, and we got discouraged. But we gave it our all anyway and it paid off when Tiny Engines checked up on us. Those tiny shows weren’t for nothing. It was a really great lesson, you never know who will be there, or who will appreciate what you’re doing.

You’re about to tour with Save Ends. Any shows planned after that?

We’re doing a 28 date tour, and closing out the last 10 days with Save Ends. After that we’ll be going out again in June, focusing primarily on the Midwest. We’ll be going out with another sick Tiny Engines band, but we’ll be announcing it pretty soon. The plan for now is to keep touring.

What’s next for you guys?

For now mainly more touring, hitting new cities, hopefully reaching the West Coast before 2015. We’re booked for some pretty awesome festivals which haven’t been announced yet as well. I think the next year will be really fun for us, I’m really looking forward to it. We’re thinking for our next release we want to do something shorter, maybe only 2-4 songs. We haven’t really hammered out the details yet but we are already working on new stuff. 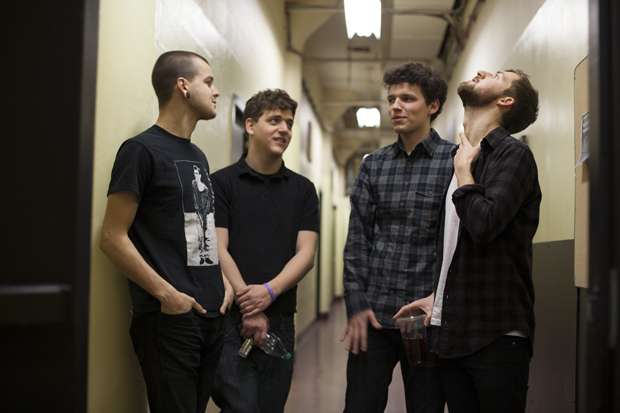 PrevInterview: To Kill A King Talks About Acceptance Outside Their Home Country
Interviews: Helmet Talks About Making ‘Betty” and Why Playing The Album Live Is DifficultNext