Interview: Special Explosion Talk About How They Got To Where They Are

While on the road to a show I called up Andy and Lizzy from Special Explosion to find out more about this somewhat new band and hear some details about all the new ground they’re breaking, including their record deal and alluring new EP, The Art Of Mothering.

And how’d you get with Topshelf?

Andy: I got asked by a local venue called El Corazon. He asked if we wanted to play a show on a Tuesday night and at first we were like, “Ehhh…It’s Tuesday,” but we ended up playing and we met The World Is A Beautiful Place who are on Topshelf and they really liked us and pitched us to the label and it turned out to be a great night and a big step for us and kind of a random event too. And that was right before we recorded this current EP. It was like four or five days before we started, and we’d told him that we were pretty much playing our EP that night and they were really happy with it. And one of the band members, Greg, just started working for Topshelf and he was really excited about us and we were the first band he pitched to the label.

And that’s cool like you said you were just going to be going in to work on your EP. About these songs, were you working on them for a while?

Andy: We’d been working on those pretty much since the release of the 7” so it’d been at least six months that we were working on all those songs. The single, “Clotheslined,” was written a couple weeks before we recorded but everything else we had actually just started recording at a new rehearsal space and were getting ourselves attuned to that room and Lizzy transitioned to bass because our old bassist went to college and Lizzy had been wanting to play bass for a while so we narrowed in on new ideas and a new sound and were like hermits in our practice space for a good six months and that’s what came out of it.

Lizzy: Just by trying to practice as a four-piece and get our bearings and that it was almost a different band, that’s how all these songs really came about. We spent so much time in that little room playing all the time.

So were you a five-piece before and you just sang?

I played guitar. I was kinda mostly singing, just playing auxiliary here and there.

How was it making the transition?

It was great. I’m really lucky I’m in a band with two of my favorite guitar players. Watching my brother Andy and Sebastien play guitar all the time I feel like just by being around it just made me a better musician. It was pretty easy to pick it up because I already knew all the songs. I feel like it was really natural, it just made sense and I feel like this is our best line-up so far and switching to a four-piece made all the difference for where we were before and where we are now.

Just what you’re saying about the line-up and having the new EP out and getting with the new label and the tour, you guys must be feeling really good.

It’s pretty awesome. This is the point we’ve been working towards for the last three, four years. Now we’re gonna go on tour. Now we’re gonna be on a label. Now we have other people on our team instead of it just being all us. And that was really fun for a long time, just DIY, we did it all by ourselves but now we have all these people who are there with us and they’re booking shows for us and finding couches for us to crash on. It’s pretty amazing.

Can you give a brief history of how the band came about?

Andy: We all attended a music school, music program, in Seattle called The Paul Green School Of Rock. We didn’t really know what we were getting into when we signed up for a music program but it turned out to be a great experience. We met a lot of serious musicians who worked at the School Of Rock, one of them being Ben Barnett of Kind Of Like Spitting. He really inspired the whole school, 100-plus kids to play passionately and be in a band and I think the five of us when we started, really stood out to each other. It kinda just happened naturally. There wasn’t really a choice, if that makes sense. We were the ones who wanted to start writing music. But we did start with a different line-up. It was me, Lizzy, our original bass player, who’s not with us now…

Lizzy: He’s not dead. [Laughs] He liked jazz better. But the first line-up was me, him and Andy and we played David Bowie covers and wanted to write our own songs but we’d never done that before. So it took a long time. It started and then we found a drummer and then a line-up change here and there and then for a while we were playing a lot of shows at bars where we’d have to stand outside for two hours, play for 20 minutes, and stand outside for two more hours to get paid. It was a slow beginning. But then the longest line-up we had up till now was the four of us plus the other bass player. We all met at The School Of Rock and played covers together for so long and we just really wanted to take it to the next level and transition our paths as musicians form playing other people’s music to making what we wanted to make.

Andy: And what other people wanted to listen to.

Lizzy: Yeah, we just play music that we like and that doesn’t exist yet.

I saw your Facebook page and like the way you describe your sound, “aggro-dreamo.” The new genre… [Laughter] It reminds me sometimes I hate labeling bands and then sometimes you read about a band and someone labels them a certain thing and then it seems like everyone just grabs a hold of that and calls it the same thing. Is that kind of why you did that?

Lizzy: Yeah. It’s a really hard question to answer. People are like, “What kind of music do you play?” and I’m like, “I don’t know!” A lot of the bands I’d say we sound like, other people I talk to wouldn’t even know those bands and I wouldn’t know how to describe what I do to people who say they’ve never heard anything like that before. I feel like there’s such a limit to what you can say as far as genres so we’ve been struggling with that for a couple of years, finding the best way to describe us without saying, “Oh, we really like Built To Spill and Sunny Day Real Estate.” I feel like that’s pretty obvious. But it’s not so much of a copying, it’s more just we really like them and that comes across but how do we describe that? So we just made up a new thing. Now it’s a real thing I guess.

Andy, you write all the lyrics?

Andy: For the most part, yeah. I love writing music and that’s pretty much what I wanna do all day long. But for this record I wrote all the lyrics.

Is there any common theme here?

I think there’s two common themes. The name of the record, The Art Of Mothering, I think that represents us growing out of our homes into our own lives outside of family and being under your mother or anybody’s control. It represents how our band is functioning now too; yeah, we’re under Topshelf’s wing, but we’ve really branched out from our past selves, so that’s one theme. I guess I’d say the other theme is hopeless romanticism─a normal thing in this Topshelf category. 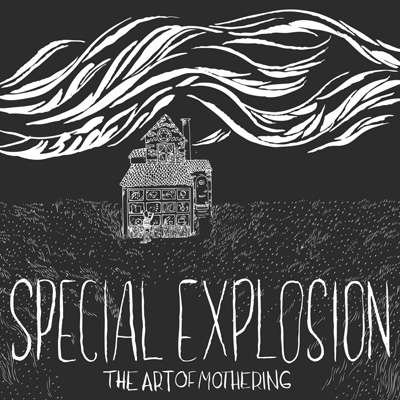