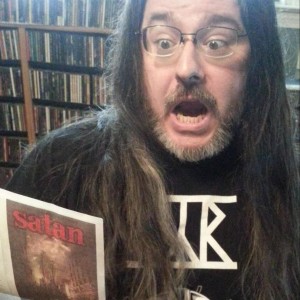 Interview: The Spectacle Of Babymetal Is Undeniable

“Babymetal has theme of ‘Metal Resistance.’ The resistance is for fixed idea of metal or pop music. Babymetal means birth of new metal.”

On stage at the Fillmore in Philadelphia, Babymetal’s spectacle is undeniable. Three tiny Japanese girls – original members Suzuka “Su-Metal” Nakamoto and Moa “Moametal” Kikuchi, joined by touring member Riho Sayashi – dance in formation while singing mostly in their native tongue. Clad in sparkly black dresses that reflect seizure-inducing strobes, they act out a compelling storyline about “Future Metal” that plays out on the rear screen. Relegated to the background are musicians, all in masks, churning out anthemic songs that straddle the line between grandiose power metal and the hyper, video game metal of Dragonforce.

It makes for compelling theater, but the thing about theater is that it involves actors playing parts. That is definitely the case for Babymetal.

“Babymetal has theme of ‘Metal Resistance.’ The resistance is for fixed idea of metal or pop music. Babymetal means birth of new metal.”

The quote above comes from an email interview. An in-person chat was unavailable due to translation issues.

“The answers would have been the same had this been in person,” assures the band’s publicist Ryan Cunningham. “They don’t speak English very well, so they figure out the answers, write them down, memorize them, and then say them in the in-person interviews.”

The fact that the emailed answers do not attribute quotes to any particular member of Babymetal is telling. A metal band losing an integral member would be met with Blabbermouth churning out links detailing the split. In J-Pop, members are interchangeable. This was the case when Yui “Yuimetal” Mizuno left the group, supposedly due to undisclosed health issues which came to light many months after her simply not appearing on a 2018 U.S. tour.

“Even though she left the group, we will continually support her.”

This knowledge won’t quell Babymetal haters, but it likely won’t dissuade any of the band’s fans either. Neither will the project’s new album Metal Galaxy. A question about whether the two foundational singers might be involved in the songwriting was crossed out, so we may never know if they contributed or even wanted to.

We do know that Metal Galaxy a concept album.

“Yes, based on the concept of travelling Metal Galaxy. The album has wide variety of sub-genre of various metal [sic], and mixture of non-metal music. This album also has concept of duality such as ‘Light Side’ and ‘Dark Side.’”

“In 2018, Sabaton joined Babymetal’s festival in Japan. It all started from that night. Thanks to Joakim, the song became more powerful and enjoyable.”

“Distortion is a song about two personalities that exist inside of people, and duality. We needed Alissa as an icon that has different character from Su-Metal’s character. She was perfect because we are looking for female singer who can growl, so we couldn’t think about anybody else for the song, and she added great sound on the song.”

Metal Galaxy – like the band’s live performance – is a lot of fun. It’s no less gimmicky than the “Gimme Chocolate” video, whose 2014 viral explosion introduced many to the band, but no less catchy either. Despite what some pearl-clutchers say, gimmickry has never been a problem in metal (from Kiss through Venom through Ghost), and it isn’t here.

It can be a little frustrating. Hopefully that frustration is not shared by the members of Babymetal, though they’d never be allowed to say if it was.