The Hungarian avant-garde metal project Thy Catafalque present a stirring portrait of inner contemplation in the shadow of a storm on their compelling new album, Vadak. As suggested by the forest-filled cover art, venturing into the immersive world of Vadak (meaning “wildlings”) feels like rushing through an ominously formidable stretch of shadowy woods before emotionally settling into the expanse.

“As I think about the album, it’s about running or fleeing from the realities of life,” multi-instrumentalist and project mastermind Tamás Kátai shares. “I see it as: we are like running animals in the forest of existence, and running from the realities of life, running from time, and this is the whole thing. And yeah, it can be cathartic at times, sometimes it’s tragic, but also this forest— this is an allegorical forest— this is a beautiful place anyway. So, I try to see the nice things in passing, and I try to concentrate on the beautiful things as well.”

The vibrant record, a June release from Season of Mist, features a worldwide list of collaborators providing a striking array of instrumentation, from the gently moving cello on album closer “Zúzmara,” to the Armenian woodwind instrument known as the duduk that appears on “Piros-sárga.”

Pieces of Vadak were recorded in Ukraine, Spain, Israel, Switzerland, and the U.S., and the list goes well on from there.

“This time my approach was trying to record anything that’s possible live, so not using that many keyboards as I usually use,” Kátai explains. “So, this way I just found people on the internet, some people that I knew personally, and I just asked them to help me out. And it was quite easy actually, because anyway these times people were at home and very happy to record anything, because musicians couldn’t do anything else. There were no gigs. So, I think it was beneficial for everyone involved, for me and for them as well, just to take part in this and play something on songs.”

“These folkloric elements I have are obviously coming from my cultural background. They are Hungarian things. Probably it’s not so obvious from the United States. It probably sounds like more Eastern or Middle Eastern or something, but these are mainly Hungarian motifs if you hear any folk motifs, and it was coming from my background, culturally and geographically as well. And especially geographically, when I moved to Scotland in 2008, and I think while I was in Scotland, I recorded three or four albums, and especially on Sgùrr, it was totally inspired by the Scottish Highlands. Even the title is Scottish Gaelic for that album. I was hiking a lot up in the Highlands back then, and that whole album was inspired by it.”

Besides poignant instruments like the saxophone and violin, Thy Catafalque employ ferocious metal riffing that proves quite tense, although in its heavier moments, the album consistently dashes along rather than sticking to a slower pace, keeping the trek electrifying. The crushing guitars run across album opener “Szarvas,” the over ten-minute-long “Móló,” and elsewhere.

Shadows of existential tension have always stretched across the work of Thy Catafalque, Kátai shares.

“This is my main idea. This whole project is all about— not death, but almost like that. Even the band’s name is Thy Catafalque. A catafalque is a pedestal for a coffin. Our first album was titled Sublunary Tragedies. It was a bit more dramatic in the beginnings because we were very young and used a more theatrical approach. We had this very epic black metal approach in the beginnings, and I think it has changed a lot. But still, the main motive is this tragical escapism from death, but also looking at the beautiful things. So, I don’t think that has changed a lot. I think this theme, this topic has been here for the last 20 years.” 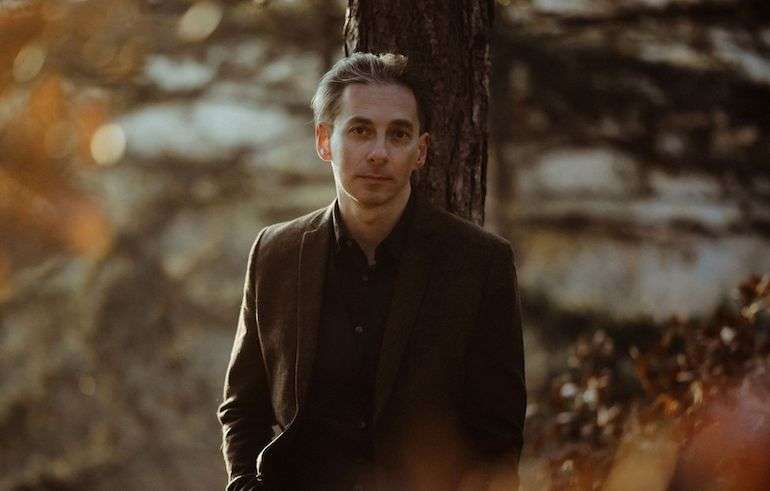 Vadak is emerging not too long after Naiv, the project’s previous full-length record, which dropped in January 2020. The new album is “darker,” the multi-instrumentalist shares.

“It’s, I would say, darker, because Naiv was not lighter but more playful, and probably this kind of playfulness or cheerfulness is not really present here,” Kátai observes. “There are some songs and there are some parts that are quite happy, and it’s quite cheerful and playful, but yeah this time I think it’s darker in general tone than the previous one. It wasn’t intentional. I didn’t want to make it harder or make it heavier, but it turned out like this, and I’m sure it’s because of the global situation as well, because obviously it has its effects on what I do. I cannot really get away from this.”

Although Vadak is strikingly heavy, its rhythms often prove emotively dynamic, making the journey feel self-reflective. As it soars into unique crescendo-like passages including the wistful violins on “Vadak (Az átváltozás rítusai),” the record packs grounded resolve. The heavy moments balance with lighter passages, creating a feeling like laying down to rest in the soil once reaching the record’s conclusion.

“One day I want to make a metal record, like a straight-up metal record without any synthesizers or any artistic approach, just really down-to-earth metal, but I’m not sure I’m able to do this,” he shares. “Because I always start the albums like: Okay, I want to make a metal album, but it ends up after the second song full of jazz instruments and shit like that. And it always happens, but one day I would really like to do one, just one simple metal album. Probably I will do it one day.”

Kátai is becoming only increasingly artistically exploratory, he says.

“I would say I think I’m getting more careless about things, and I’m not taking them so seriously as I used to,” he says. “Because in the beginning, we were a black metal band. We wanted to play black metal and that was all. We wanted to be heavy. If you listen to the first album, it’s fast, and it’s really extreme. We wanted to play fast. This is why we started to play with the drum machine in the first place, because there was no drummer in our place. We were coming from a very small town from the southeast of Hungary, and there were no capable drummers at all in the town, or anywhere nearby, but we wanted to be extremely fast, so [we said]: Okay let’s program the drums. So that’s how we started playing with a drum machine.”

The Thy Catafalque approach has shifted over the years.

“In the beginning, it was just playing fast and furious, but it has changed a lot,” Kátai explains, discussing the guiding principles of Thy Catafalque. “Because in these times I’m not interested in being heavy at all. If it happens, it happens, but it’s not the main goal to play heavy, or to play fast, or to be dark. It happens, but it is not my main motivation. However, it used to be, and I think that’s a big change. And now I can… I let in motifs, and genres, and tunes that sounded impossible 15 years ago. Maybe it was nonsense to put such jazzy piano pieces in the middle of black metal songs back in 1999. But this— I don’t mind it anymore.  I just see the world more colorful now, and in general, I’m more playful than I used to be, even though [Vadak] was not so playful, but still there are these elements.”

For more from Thy Catafalque, find them on Bandcamp and Facebook.

Photos courtesy of Thy Catafalque and Orsolya Karancz.