Under Attack are a new, hardcore-punk supergroup out of Richmond, Virginia which features drummer Dave Witte (Municipal Waste, Burnt By The Sun), guitarist Mark Telfian (Limp Wrist, Devoid Of Faith), bassist Jason Hodges (Suppression), and vocalist Alex Copeland. The band honor their genre forefathers by playing a fast, brutal and to-the-point version of hardcore which references such ’80s greats as Negative Approach and Straight Ahead.

On their most recent, seven-inch EP, Preservation’s Crash, which drops August 27 on Three One G, they take no prisoners, making a point with their no-bs delivery and lyrics that cut right down to the bone.

“As a collective, we have always been fans of extreme music, especially brutal, hardcore punk,” Telfian says. “If you look at the past bands we have played in, I feel we’re right in line with the expectations of what you would think you would hear coming from the four of us. One of our goals was to show that, even though we’re older now, we can still play music that’s as relentlessly brutal as ever.”

You would think that getting all this talent under one roof would be difficult, but the band started out organically, with a chance meeting at a party.

“Dave and I bumped into each other at our friend Rich’s party,” Telfian says. “We talked about our love for extreme and brutal music, and he suggested we get together and jam sometime. It took us a while to finally connect and jam, but when we did; we felt a great musical connection. Our longtime friend Alex Copeland had heard Dave and I were starting a band together from our friend KC, and he had asked if he could do the vocals.

“The logical choice for bass was Jason Hodges, who had been a mutual friend of us all for decades as well. In addition, he’s the best bass player we ever could have gotten. We all bring something different to the table. We’re all fans of extreme and brutal music, but we each come from our own diverse musical backgrounds that come together like Voltron.”

Each member of the band is in other bands which have made their mark on underground music, though Witte is the most “aboveground” of these underground luminaries, in that he plays drums for Municipal Waste, one of the most popular neo-thrash bands going. In addition, he has his own vegan restaurant, Hang Space, which also keeps him busy.

The big question is: Where does he find the time for all these projects?

“I’ve been guilty of having many frying pans on the stove at all times,” Witte says. “I like far too much music to have only one band, and I always need another outlet. I consider myself lucky to play with so many talented people, as they can pull things out of me in different ways, and I’m always learning something new. When I met Mark at a friend’s birthday party (Rich Green of Action Patrol, who is a stellar human), I asked him if he wanted to jam. It took us a while to get the ball rolling initially, but after we picked that scab, we were bleeding songs non-stop.” 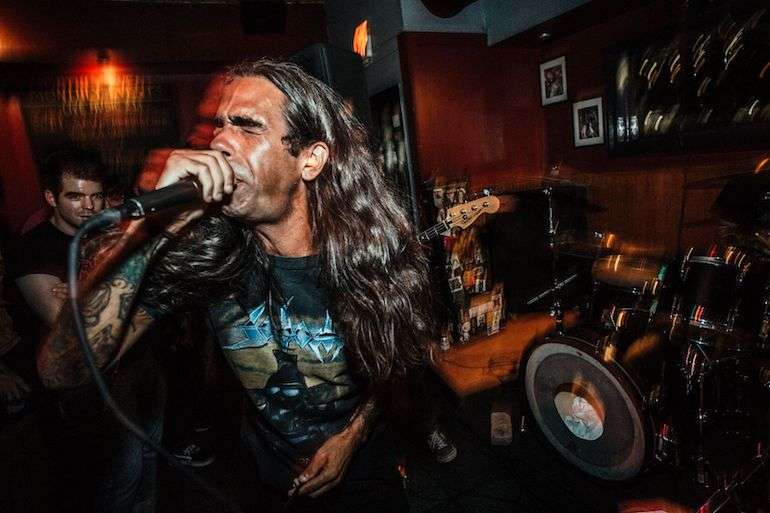 “At the start, Mark was sending skeletons of songs with riffs all mapped out,” Witte says. “We’d get together, add our parts, and poof—a song. It was easy and very quick. We have really great chemistry. As we went on, we started writing together on the spot at practice, and that’s proved to be very good for us.

In addition, they had a plan to keep themselves busy and productive during the recent break from touring brought on by COVID.

“Mark had a really great idea over the pandemic to help keep us focused,” Witte says. “We managed to line up quite a few split records, and Mark’s plan was to work on one record at a time. Write, learn, rehearse, and record each batch of songs one after another. We met once a week and were able to really crank out a lot of stuff this way. Since shows weren’t on the radar at all, there was no need to rehearse songs. It was, write, write, write. Al is the writer of words, by the way, and he was also very helpful with suggestions and ideas for music, too. The band operates really well together when writing.”

Once they had the music on point, they had to make sure the lyrics were on point, also. That’s where Copeland comes in. He doesn’t mess around with his lyrics—they get right down to the nitty-gritty of human existence.

“The lyrical content revolves heavily around hopelessness and disgust,” Copeland says. “It deals with depression, thoughts of suicide, world’s end, human filth, leeches, relationships gone wrong, the rampant hypocrisy in Christianity, working for a thankless death wage, greed. These are feelings that many have dealt with and are relatable. It’s important to write what the band will back, collectively. The words should be real and from the heart. Write what comes naturally. I’d be way more into reading sincere words that aren’t manufactured. I think the appeal of a message will always be there. The pioneers wrote words that were eye-opening, to me at least. They sat in your gut and, for many, many people, helped shape who we became.”

Working this way has been very productive for the band. They have released a bunch of seven-inches, splits, and EPs on a variety of boss labels such as Iron Lung and Vinyl Conflict, before they recorded Preservation’s Crash. This was all part of their plan.

Under Attack are really stoked to release their new EP on Three One G.

“[Three One G founder] Justin Pearson has been a good friend of ours for decades, and we were really happy to have the chance to do a record on his label,” Telfian says. “He has run a top-notch label for a long time, and he’s been on both sides of the fence, so he knows how to treat people with the utmost respect and love. He has really gone above and beyond for us. We’re really happy to say that we’re in the process of working on a 12-inch that will be coming out on Three One G.”

Under Attack came together as four friends who just happen to be seasoned, underground musicians with a variety of vaunted projects on their resumes, to play fast, ripping, and brutal hardcore. In that regard, they have succeeded. Now, with the world opening up and bands starting to tour again, they would like to get in on that action, even with their commitments to their projects outside of the band.

“It’s always a challenge working around other member’s projects and bands,” Telfian says. “Hence, most of the shows we have played so far have been in Richmond, just out of simplicity. We do want to branch out and play more places in the states, and we would also really like to do a European, U.K., and Japan tour.”

Photo courtesy of Under Attack and Michael Thorn.