Interview: Watain will want to make your grandma drink the Devil’s poison

The Wild Hunt is Swedish black metal wolf pack Watain returning to survey the flaming wreckage of the world that they leveled with previous modern classic Lawless Darkness. The power and growth of Watain is freakish, something rarely paralleled in modern metal. Their first record for new home Century Media, The Wild Hunt surpasses 90% of the other heavy records you will hear this year. Watain creations are birthed from a place of ultimate conviction, a dedication ringleader Erik Danielsson embodies with every gut wrenching riff and guttural cry.

From “Sleepless Evil” and “Outlaw” the fast, explosive “Sleepless Evil” to the primal, tribal “Outlaw” (not a Manowar cover) to the frighteningly dark confines of “The Child Must Die” and the oppressive beyond belief title track, Watain have yet again managed to add to their legacy and make it look easy. They write some of the most amazing riffs ever and could make your grandma want to drink the devil’s poison. Flames will rise.

I’m a little freaked out. I swear this happened. I dropped my phone on the ground right before you called and when I picked it up the screen said ‘666’. 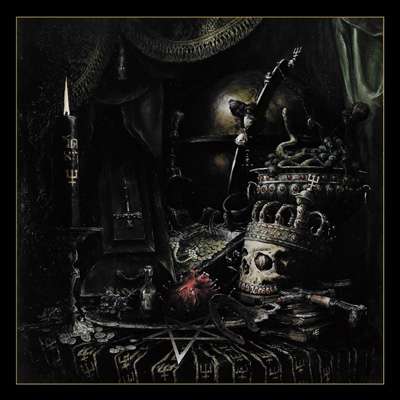 I guess that’s a good omen. It’s great to talk to you about The Wild Hunt today. I love that legend. There’s a book series called The Fionavar Tapestry by Guy Gavriel Kay. There is a version of the wild hunt of legend in these books who are kind of beyond good and evil, beholden to no one. It reminded me of Watain. You do your own thing in the metal scene.

Well, that’s nice because the more I discuss this the more I find people have different variations of how to view the title. To me, honestly, it wasn’t based on the legends. It was the combination of the two words that were stuck in our minds for a long time. The two words made an imprint and of course the legend still fit, even though the legend wasn’t what first inspired it.

This record, everyone wondered how you would follow up Lawless Darkness, such a powerful work. Your recent film Opus Diaboli was also such a strong statement of intent. It was interesting to hear where you went next.

We never plan these things. The times around Lawless Darkness and Opus Diaboli were very important. It was amazing in many ways after thirteen years. This anniversary was really the point of Opus Diaboli. It was time for us to stop and look back and at our past. That was one of the things about what The Wild Hunt was going to be about, in a sense. Looking back on our journey and trying to realize…what the fuck has been going on, really. It’s been a wild ride for Watain. Many, many important events and experiences. It was time to try and sum that up somehow. That was what we did in Opus Diaboli but with The Wild Hunt we dive deeper into that concept. We go into something almost from a mythological perspective, making our story almost religious in a way. It was very inspiring place to work from, an introspective process.

“Black Flames March” is a new song that particularly stands out as a song which does that.

I mean, all of the songs reflect it in a different way. They are all reflections on the Watain experience.

In Opus Diaboli you talk about people living a “mundane existence”. The universe is a vast, spinning place of energy. What gives Watain the will to ton on when many people are living in fear?

It’s fundamental in the idea of Satan that we break free of the norm of the form of clay we are born into. Freedom is looking beyond and finding the fire within yourself. That fire we identify as the devil is a fire that is born from something far, far beyond the concepts of a human mind. Our God has his throne far, far beyond creation as we know it. It’s always where our focus and aim has been, to reach beyond.

I think of your band as a main artery for black metal as far as a spiritual philosophy and even the cultivation of self. When so many bands are worried about getting into popular culture and the mainstream, but don’t stand for much. You have a message that is very important to you, but how important is it to you that people hear what you do and the message spreads?

We’ve never had an agenda to spread but the message people might get from Watain is a consequence of us doing something that’s extremely important to us and talking about it. Whether or not people take the keys to a kingdom and do something valuable with them, that is something very much up to the listener. I think that’s the way art and music should work. You should not try to force anything upon anyone, especially not religious ideas that cannot be penetrated by just taking part in a piece of art. You have to go much farther than that to embody and comprehend these ideas. I’d like to think of Watain in that sense as a point in the right direction. I never think of Watain as a gateway for anyone. Perhaps a point towards the gate but not the gate itself. These things start to blur out when you stumble upon something as all embracing as Watain has become to us. All of these issues and what people expect of you, whether you are part of an underground or mainstream,. these are peripheral things we don’t dwell on. That is one of the things that has saved this band and allowed us to go on all these years without compromising. We do this very much in our own universe and without taking anything else into consideration.

The production on The Wild Hunt fits the songs so well. Often in black metal there is a debate between better production values and lo-fi recordings like the early black metal. What you have done…it sounds very good but if anything immerses you really deeply into the world of these songs.

I’m glad to hear that. I’m extremely pleased with how the production came out. You can’t really express what we want to with nice, clean production but you also can’t do it with garage production. I guess we were aiming for something that sounded somewhere between a mid 80’s Metallica album and a nightmare (laughing). Something extremely backwards and wrong but also very deeply rooted in traditional metal.

The opener “Night Vision” opens with all these atmospherics. There are many layers and even accordion. It really disorients the listener and sets the stage for what is to come.

We recorded over four months. That was not about having luxury. It was about having something we were in need of. We always wanted to put a lot of effort into details and that kind of let the thing move beyond a regular black metal album or whatever. To a great extent The WIld Hunt is first and foremost conveying emotion. It’s capturing Watain, if anything, and that requires special techniques. I really enjoyed being able to look deeper and deeper for things we needed and to be able to express finally a greater statement of what is inside of us.

Even in your stage show now, you’ve had a chance to do some really big shows but even in a smaller setting…I was very lucky and saw you at The Loft in Poughkeepsie, NY to about a hundred people and yet even in that scaled down setting with less fire, the music gets across the music just as much as “theatrics”. Some bands you take away their image and it is not as powerful but not Watain.

The live show is, if anything, where we allow chaos to reign. I like varying the shows from doing grandiose festivals in Europe with flames shooting to the fucking sky and there’s no limit to anything but then I very much enjoy shows like that Loft show. It was a very good example of how Watain works in a more limited scenario. It makes you want to push boundaries even more and focus on the primal essence of the band. That’s important also, to do underground shows where people are just blood, sweat and tears and fucking violent, horrible celebrations of ceremonial fanaticism. AS well as to do wild, grandiose shows like a religion and erect our temple and really go all the way.

Excellent. It’s very inspiring. Many bands lose the script. This record is one of the best of the year. Can you talk about “They Rode On”? That song has clean vocals but doesn’t take away from the band. It establishes more of a mode without becoming your “crossover ballad”.

Yeah, it’s a special song. I always had problems when you have a favorite band and they try a new thing but it doesn’t work. They stray away from their past but lose a sense of foundation. It was very important for us to trust in this but in essence it brought us closer to who we are. “They Rode On” is in many ways the song that is closest to the journey of Watain on the album. It is important at times to use another kind of artistic language to express yourself and we had very important things to say in that song. People are starting to understand this band a bit more which is about fucking time.

Watain are featured in New Noise Magazine Issue #5
Get a copy here.