Interview: Wilson vocalist Chad Nicefield on spreading their seed, bands that phone it in, and “Full Blast Fuckery”

The relatively new windows-down-on-the-freeway rockin’ your balls off band, Wilson, just finished up writing and recording a brand new album, the second release of their career and first full-length record, entitled Full Blast Fuckery, which could easily be used as the soundtrack for exactly what it’s called. They have just finished a tour with Newsted, the intuitively named project fronted by Jason Newsted, where they fucked many ears and left a Wilson shaped impression on the brains of rowdy teenagers, and they plan to “deliver the bulge” on tours to come.

So when and how did Wilson come together?

Wilson came together in 2010 while our guitarist Jason Spencer was attending Michigan State University in East Lansing. Michigan. The band started out as somewhat of a “side project/just for shits and giggles” and then started to really reveal its ugly head in 2011 when we took it on the road for the first time!

I’ve been hearing a lot of really great things about your run with Newsted, how did that tour go?

It was amazing! To get the chance to share a stage with a legend like Jason is very rare in a band’s career…and the fact that we are all huge fans made it even more surreal. The shows were stellar and the reception Wilson took in from the audiences was pretty overwhelming! We had a blast with the whole Newsted crew and feel pretty privileged to have had Jason pick Wilson himself to support him on such a monumental run as his 1st string of dates with his new band!

Do you think you spread the fun, sweaty, and loud seed of Wilson in a significant amount of ears?

We are always looking for more ear holes to fuck! As a relatively young band we’ve had some pretty great touring experiences already, supporting a VERY wide spectrum of acts like Foxy Shazam, Every Avenue, GWAR and Newsted to name a few. We’ve gotten to spread our “seed” in a pretty cool genre splitting way…the whole idea of this band is to do exactly what you mentioned here…so until we all die a gruesome mind-numbing death, we will have never spread that seed far enough in our eyes. 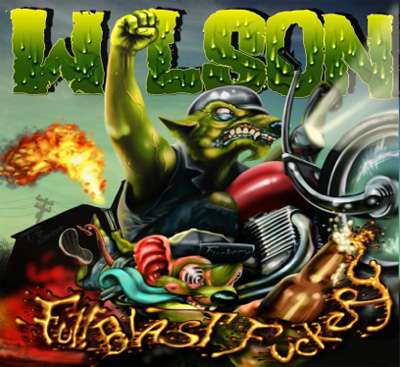 Is your new album Full Blast Fuckery about exactly what it’s called? Or does it go a bit deeper than that.

[Laughs] That’s the feeling the record is intended to give the listener, yes! Is our record actually written about Full Blast Fuckery? Not exactly. I am still a human and have a human brain with a wide array of human emotion. etc etc. Is the record a sappy bullshit love story, am I crying about some girl that didn’t show me attention in history class 5 years ago, do I have some hidden agenda to whine to you about my emotions? NO! But, there are some pretty real situations happening in our music. There is a lot there about, family, friends, and great times sure…but there is also a lot there about foes, personal defeat and the movie Fear starring Mark Wahlberg.

Have you guys released any other albums or EP’s before this one?

One EP in 2010 titled Standing On The Reel. We pressed a few thousand copies and sold out of it. Now you can only find it on iTunes, etc.

You guys seem to pride yourselves on “not being an internet band,” which is something I can respect as a lot of bands are slacking on being real out and about, hands on, nitty gritty musicians. What are some of your philosophies on music and what it means to be in a band?

This could turn into a pretty lengthy answer…but to save you all from reading about my undying hatred for bands who just “phone it in” nowadays I’ll just get to the brass tacks. We hail from Detroit, MI. I don’t think I need to educate anyone on what that means as the media does a pretty good job of describing our current state of blight. But what they don’t show you is how we actually survive here. How we actually make our own destiny here. As any Midwesterner knows, shit doesn’t come as easy for us…there are no “beach days” here. You bust your ass day in and day out and you bring home the meal ticket for your family to survive. That same blue collar work ethic that our families instilled in us to make our own way in life, bust ass and prove your worth is the same mentality we give to our music and band identity as a whole. We believe in hard work, because we know it pays off. We believe in Wilson.

How do you feel about bands that primarily use the internet to market themselves?

Of course Wilson utilizes the tools made available to us to get our music out there any way possible… the internet is a beautiful thing. And Wilson would be nowhere near where we are as a band without it… however, you still need to “deliver” a live show to keep a fan for life. The blogosphere world is brutal and quick to erase you from the memory for the new flashy pajama jams in a matter of minutes… if you are getting the love there, you need to back it up with the meat and potatoes. If you cannot deliver the bulge live you need to go home, set your computer on fire and pick up a guitar.

What other plans do you guys have for the rest of this year and the years to come?

TONS AND TONS OF TOURING. You know…delivering the bulge!