Interview: The Wounded Kings Discuss The Meaning Of ‘Consolamentum’ In Their New Album

Interview with Steve Mills | by hutch

For the uninitiated, can you discuss the transition from being a four piece, and not only adding a fifth member – but a new vocalist, who happens to be a female?

There wasn’t really much of a transition- more of a disintegration! The four- piece completely folded, which left myself to carry the flag and build the band up from nothing again. It turned into a five- piece purely because we have always been a two guitar band live and none of the new guys could sing. We naturally expanded to five when Sharie joined.

Was it a tough decision? How did fans react? Did it seem like a natural progression?

No, not at all. Our ethos has, and is always, the best ‘person’ for the job. It just happened that person is Sharie. Who the fuck wouldn’t want a vocalist like Sharie in the band? Imagine telling a great singer/performer, who you know is perfect for your band, that they haven’t got the job because of their gender and you are scared what the fans might think, that you could be perceived as jumping on a bandwagon? What a load of bollocks! We don’t care what fans think where that’s concerned. And if they are more concerned with gender than the music then that’s not the kind of fans we want anyways. Having said all that, we haven’t really had any problems. The majority of our fans DO care more about the music and most think Sharie is a giant leap forward for the band.

What does Consolamentum mean? And how is it represented in your music?

There’s more than one meaning. It was the Cathar Baptism, Last Rites, the absolution of sin and preparing them for eternal Life. It also means (and this is where TWK use the term) ‘Spiritual Rebirth,’ which is represented in the album as a musical journey/rites of passage.

Is that theme carried through the entire album?

It is a concept album based upon an individual’s struggle for Spiritual Transformation, to let go of control and materialism and fear based thought forms and raise their consciousness to connect with their higher self. The Cathars featured in our concept as a group who achieved this state. They were regarded by the church as a dangerous group of radicals who bypassed organized religion and went directly to the source. Thus they were wiped off the face of the earth. Look at what is happening today. They build a world of materialism, dependency, and fear to control us. It can be quite an effective diversion to keep us from seeking and living our truth.

What do you wish for people to walk away with after hearing this album?

Emotionally drained, but ultimately uplifted and the all consuming urge to put the needle back on the record and play it again!

Do you consider this a departure or growth from the prior work, or the same formula?

I feel the music of TWK is always a natural progression, sure there are always going to be similar musical themes throughout all the albums, but they are always being expanded upon and developed seeing how far we can take it.

As much as I HATE Records got you out there and certainly boasts a large roster, Candlelight seems like a bigger label? How is that transition? What do you expect for 2014 with Candlelight behind you?

I Hate is a great and well respected underground label and we are proud of our achievements with those guys. But we felt that we wanted to get our music out there to a wider audience and Candlelight was keen to partner up with us. They have the infrastructure to achieve this with a significant foothold in both the UK and the USA. So far we are delighted with the label’s efforts.

How do you construct those songs? Do you break it down in sections? Or is it more a jam?

I usually write in sections at home. I would bring a part each week to the rehearsal space and get everyone to jam it out and put their own feel into it. The guys just had to trust me that it would all fit. Then each week we would start to play more of the segments together until the final track was revealed.

While simply an instrumental short, the name “Space Conqueror” stuck out to me. Do you have an opinion on man’s quest of space exploration?

In the concept of our album Space Conqueror means as you enter an altered state of consciousness space and time does not exist. With regard to mans quest of space exploration my answer is that you don’t have to get in a tin box and float above the earth to connect with the universe.

Is equipment (brand names) important to you guys as with most doom bands?

In a word, “yes!” We are always looking for the right sound. Whether it is from pedals (we use a guy in Scotland called, Time Travel Audio. He makes bespoke pedals to your exact specifications. The man is an electronic alchemist), amps (we have just signed an endorsement with HIWATT, who are hand making us some CUSTOM 100 heads which have a fantastic transparent clean channel that just eats up pedals for breakfast!), right down to strings (we use Rotosound). One thing, we like to keep it British. You have to support your home grown businesses.

Can you discuss the process of working with Chris Fielding?

We first worked with Chris on our previous album In the Chapel of the Black Hand. He came as the resident engineer with the studio. We were so fucking impressed with his work ethic, knowledge and all round top geezer attitude that we vowed not to work with anyone else ever again…period! Something that remains true to this day. Chris has become like the sixth member of the band. He’s a fan of heavy music and not afraid to experiment to get the results.

Can you explain how Dartmoor influences your music and how you might have a different sound if you were from elsewhere?

I think the music you create is nearly always born from external influences. Whether it’s what you see with your eyes everyday or whether dealing with emotions that life throws at you. Lucky for me, I live in Dartmoor, the perfect place to conjure up doom and beauty in equal measures. The Moors can be an unforgiving, desolate and frightening place with dense fog and bogs. It can also look beautiful with clear skies and the sun radiating down on the stone circles and craggy Tors casting there ever moving shadows onto the landscape. I can walk for miles without seeing a living soul. The perfect time for being with your thoughts. 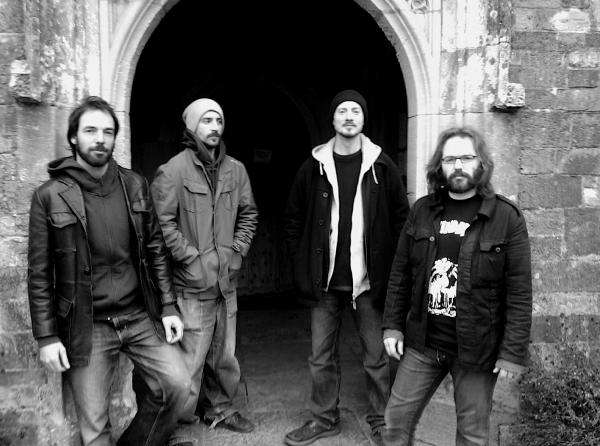