Some of your mellow stuff reminds me more of like an edgy Jackson Browne, but more fringe like street beats and poets. What direction are you moving in for the new record Refractory Obdurate?

The writing process was the same direction I’ve been headed the last few records. I was playing around with the electric guitar more. Live, we’re extremely loud, even when we are playing the earlier stuff. We recorded live here in Denver and we try and get across what it is like to play live, rather than the earlier records which were much more studio. So this is just what we sound like when we get out on a stage. Just trying to convey that. The live show is what’s normally spoken about. A lot more people see us play than records that we sell.

Yeah, when I heard you had members of Git Some and Planes Mistaken for Stars, and that it was on Deathwish Inc., I knew it would be great.

Yeah, we were excited that it was on Deathwish. They wanted to capture our live experience and yeah, playing with [Git Some’s] Neil [Keener] and Chuck [French] is Wovenhand Mistaken for Stars.

The Biblical references and storyteller vibe to the songs… Did you ever take public speaking classes?

You mention the Good Shepherd and the record cover is a fractured quilt. It is like we have guides, but don’t follow them, and history is so patchwork.

The album title Refractory Obdurate is rebellious, rebellious. Redundant. It’s put across in the pattern of the quilt. The patchwork of the land around us. The farm and communities are decaying like an old rug, an old blanket, you know? It’s not going to cover you forever. The scriptural reference is the heavens and the earth will wear out like a rug. Yeah. Be rolled up.

Pete Seeger just passed away. He was often supportive of encouraging the growth of local businesses or farming. Community building.

That idea of preserving heritage and community, supporting local efforts, these are good ideas. But all of these desires to get back to the land and a connection to people, well… The progress that got us to where we are now has brought us what? An iPhone. So we have iPhones now to help us get community again. This is patchwork progress built on the blood and bones of people who used to live there. You are growing your crop on the blood and the bones of people who used to be there. That’s how I feel about it. The idea of getting together and community are nice ideas. But there are bigger problems.

How can people pick up the pieces and deal with the wake of history? Do you have any ideas?

I’m a Biblical believer. I don’t have opinions, OK. I believe things are as they are. There is the offer of salvation and the offer of ‘do it yourself.’ We will rebuild. We will come back stronger. Whatever you want to put behind that. Some idea of mankind locking elbows and going on into the future. I’m saying there is salvation from this patchwork that we’re living on. There’s no way out. Those people are gone. What can we do? We have to move on and do the best we can. And I’m sure that has been the attitude since day one. OK, this is a bad thing that’s happened, but we have to press on. That’s what we’ve done. So now we have an iPhone, but that’s about it. It’s easy to get wrapped up in “This Land is Your Land,” but whose land is it, really? Who is singing that song and whose land are they talking about? This is not a Native American song. This is a white man’s song. Someone decided it was their land. And we move in on it. “Look at all the stuff we have to offer the rest of the world?” And there is no way out, because the people in charge ram it through. That’s the whole purpose of God. It’s not the point to make you a better person. The point is the damage has already been done. What do you want to do with this fact? People say we have learned our lesson. That’s how we behaved in the past and realized that is not the proper way to behave. That’s bullshit. You’ve always known that is not the proper way to behave. That’s a bullshit statement.

Colonialism or murder in general?

It’s white supremacy, is what it is. It’s taken form in religion and politics, advertising and community organization. It’s pretty bleak, in my opinion.

In school, I remember playing The Oregon Trail where you are a pioneer crossing America to find gold or settle land in a covered wagon. We learn this early.

Right. That’s what it is. The biggest data collecting building on the planet is in Utah. The FBI, CIA collection agency. It’s in Mormon country, Utah. The quintessential covered wagon and a bunch of oxen trudging across the earth to save everybody and build Star Children. I don’t know what. Everybody’s got a mandate from God, right? Go and clean everything up. So that’s what they’ve done.

Do it their way.

A Christian lady gave me a big bag of bread when I was hitching in Utah once. That was nice.

That’s the point. The symbol of Utah is the beehive, right? Industry and good works. That’s how you earn merits. Make sure you are friendly and give to people. You have to do it. If you don’t do it, you aren’t one of the flock.

They say Jesus hung out with hookers and thieves, so…

That’s the point. He did it. And that’s what all of us are. Some people take the position they are not those things… Like the white man. The white man has the ability to control all of these desires and be a guiding light of the world.

Pick and choose battles based on profit. Help this county, but not another.

At the top, the agenda is completely sinister, without a doubt. I don’t even know what that means, but I wish things would be different.

Some songs remind me of Indian raga sometimes and I feel like they can maybe summon the spirit for people.

I think of that phrase as somewhat delusional. People use different means and formulated emotional patterns. Rock ‘n’ roll shows bring people in the same way. Alcohol can be involved. They use lighting. It’s a ritual set up in advance. You can convey through the formula whatever you want. You can alter all these things to your view. There are experiences where all that shows itself to be hollow and what is happening on the stage is actually other than what’s expected to be there. This is usually the times when I’ve been moved by music. The power of music as a tool outside the formula. And there’s a lot of formulas. The indie formula. punk rock formula. Adult Christian. Like the country music now is part Nashville, part Hollywood, part New York. The formulas change depending on the appetites of people and how the money is brought in. Market research. That’s the majority of music out there.

Do you think a pure way to make a statement is to affiliate with a label you like?

Um, it’s a beast. This music business is a beast. Main heads and smaller heads. Hands that bite the big hand or companies. I’ve been on majors and independents and I like them all. I like those people. They all have the same intent from the top to the mom and pop place. In my experience, they have the same attitude. They are genuine in liking the music. But those people we worked with at the big record company, they all got fired. A&M Records was bought out by Seagrams, the booze company. So they kept Sting and Sheryl Crow, but dropped everybody else. It’s all the same story. But I don’t think there is a difference in the attitudes of the people working there. Some people like commercial sounding music and are selling different ideas to make money or be famous, but there’s a million different levels of that. It really depends person to person on their attitude. It’s hard to pin down. People have a short memory of where music came from. Early on rock ‘n’ roll was brought to you by Alka Seltzer or Aspirin. Hank Williams was brought to you by, you know, Happy O’Daniel’s Biscuit Flour. Bluegrass to Library of Congress Records.

I like reading about the Brill Building- era and people having to sit around cranking out hits.

Guys from Sweden sit in an office now writing country hits to sell. A puppet gets up and performs the number. But country music has kind of always been that way. People latch on to those ideas of American Pride. They’ve been on the land for generations. Good people won and bad lost. Those who won deserved to win because they had better equipment or more morality. This is the American espousal, the idea that all the world aspires to be.

You read author and historian Howard Zinn and realize every country has done horrible things to each other.

What are countries? They are made up of people. 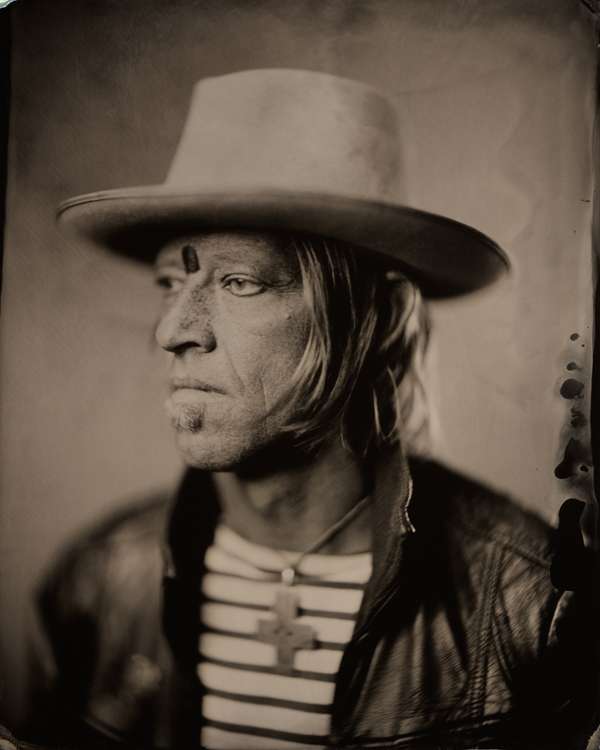