In 1999, Ryan Canavan released the first record under his label HEX Records. He was delving into unknown territory after printing his punk zine “Hanging Like a Hex” for several years. He was supposed to do a sampler release to ease into the process, but the partner balked. Instead of letting the idea linger, Canavan continued on this intimidating trek.

That first record, HXR001, was a four-way split 7” featuring NORA, Hermon DeKalb, Eternal Youth, and Every Time I Die. Canavan knew good music when he heard it even if it did not fit the parameters of a known genre, and he has continued to act on these impulses for 20 years. Two decades later, in 2019, it seems an appropriate time to reflect on the last nearly 50 records—including offerings from Dialysis, Grizzlor, Achilles, Engineer, Cursed, Playing Enemy, The Helm, Lemuria, Night Owls, Inkling, Godstopper, and many more—and, of course, keep releasing new ones.

After that initial record in 1999, and after overcoming his trepidation about what seemed to be a daunting project, Canavan was eager to repeat the process. “Once I put out a record, I thought, ‘That wasn’t that tough,’” he says.

Canavan is candid and concise about his approach to releasing records. “In the past, so much of it was being regional,” he says. Canavan was born and raised in Syracuse, New York, save for a few years in adjacent Buffalo, and resided in Upstate New York until late 2017. “I thought there were so many cool bands that came out of central and Upstate New York,” he notes. “A lot of bands I put out were from my region. I wanted to celebrate where I was from.”

Through the 2000s, Canavan kept releasing records, but his geographical reach grew organically. “Some of the people in those bands moved to other parts of the country and started other bands. I would keep that connection,” he explains. “One of my best friends back in the early 2000s moved from Syracuse up to Seattle. He started a band called The Helm. They were awesome, real crusty hardcore. I thought, ‘This was a friend from back home, and it is a cool band.’ So, I wanted to put that out. I started to expand and find interest in other parts of the country, and that led to good friendships.”

As Canavan peers back over the prior two decades, he is frank about his schedule and motivation. “I’ve gone through periods where I didn’t put out a record, like a whole year,” he says, “and I have other years where I put out four or five records. I stopped the zine in 2005, and I just focused on putting out the records.”

The strength of those releases results in an active catalog for hungry noise-searchers to play on their turntables. Now in Portland, Oregon, after 40 years in Upstate New York, Canavan is comfortable and excited for the future. In the fall of 2017, he and wife moved to the Pacific Northwest, happily abandoning the Syracuse winters and trading them for grey, damp forests.

In the ’90s, when Canavan was a teen, Syracuse and Buffalo were known for a specific type of hardcore, almost exclusively: metallic vegan straight edge hardcore. Purging any remnants of punk rock, the ’90s were made for militant ideals and moshing. The scene was led by bands such as One King Down, Earth Crisis, and Another Victim, but add the Buffalo scene, later permutations, and non-straight-edge bands, and one can include early Snapcase, Santa Sangre, Path Of Resistance, The Promise, Despair, Buried Alive, Slugfest, and more. Portland has been known for crusty peace punk, d-beat, and old-school raw hardcore punk—it is the home of Poison Idea, of course. 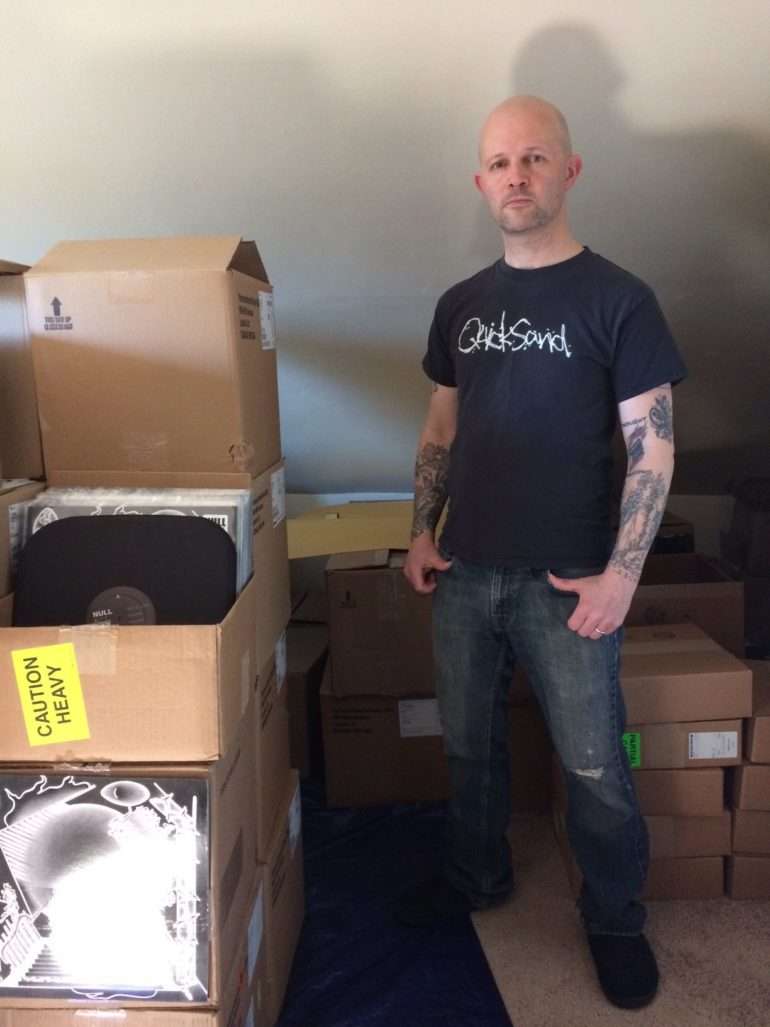 “On the other hand, there’s also a lot of awesome bands,” he admits, “and there is nothing wrong with the bands that want to play moshy metallic stuff. They are nice people, the shows are fun, but my musical interest lies in more abstract, heavy, weird bands. There are a lot of noisy, heavy bands here that pique my interest.”

Exploring the dichotomy of Syracuse versus Portland, the impact of the cities’ sizes is inescapable. Canavan laments the loss of knowing every single person at a show, that tight-knit camaraderie, but he also revels in the expansive landscape. “You can have five different awesome shows in one night, and all of them do well, as opposed to Syracuse where you would have two shows, one would tank, and one would do OK,” he says. “Being in a bigger city, it can support a bigger scene. Sometimes I miss the small-town scene dynamic, but here, I can literally see any band I want to when they tour.”

“I appreciate that incredible shows come to Portland and I can ride my bike to them,” he adds, “even in the winter.”

Despite the change of scenery, HEX Records is going stronger than ever. “This year is a big year for Hex Records,” Canavan states plainly. “It’s the 20th anniversary.” Prodded by the round number, the itch to celebrate began in 2018. “I started in 1999, and last year, I got to thinking, ‘I should do something cool,’” he recalls. “I didn’t put much out last year, as I was settling in to Portland, getting accustomed to my job out here, and getting used to things.” But now, it is 2019, and Canavan plans to continue the DIY approach he has continually implemented. “I’ll be putting out some records which I’ve wanted to do for a long time,” he says. “I have a whole bunch of records I want to put out, a bunch of new bands. That’s part of it in 2019.”

The other part is a retrospective project. “I’m doing these weekly ‘making of’ type pieces on my blog site about every record I’ve put out,” Canavan explains. “I am interviewing people who I have known for almost 20 years now. Every week is a different record that I put out. At this point, I’ve put out almost 50 records. I know that’s not much for 20 years, but it is about one [blog post] a week.” Canavan basks in the opportunity to “[get] in touch with old friends and [talk] to them,” digging up aged perspectives and ask, “What was it like putting out that record?”

Canavan indulges in the emotional gratification of the project, but he doesn’t want the spotlight to be solely on his past accomplishments. “I love historical stuff and documentation, but as much as I like celebrating nostalgia, I don’t want to wallow in it,” he heeds. “I like moving forward and doing new stuff. That’s where putting out new records comes in—celebrating the old but having one foot firmly moving into the future.”

The criteria for Canavan when selecting releases is the same paradigm he has followed for 20 years. In true DIY fashion, he is HEX Records: executive, A&R, PR, designer, and financier. “I try to release records with people I am friends with,” he says. “I like having that relationship. I still get to do that. But there is also stuff I put out for bands that I think are awesome. Bands that are great. That’s where I am at now. That’s what piques my interest.”

Canavan defines “awesome” by his own standards, not trends or numerical equations. The ethos, spirit, and attitude of the band—and their sound too, of course—are what decides his output. “A lot of that veers on bands that have a connection to punk and hardcore but might not sound like that in the strictest sense,” he says. “I like the idea of bands that are heavy and weird doing something original and interesting, not just traditional hardcore. There’s a place for that, but there are plenty of labels that serve that. I’ve always been into heavy and weird stuff.” 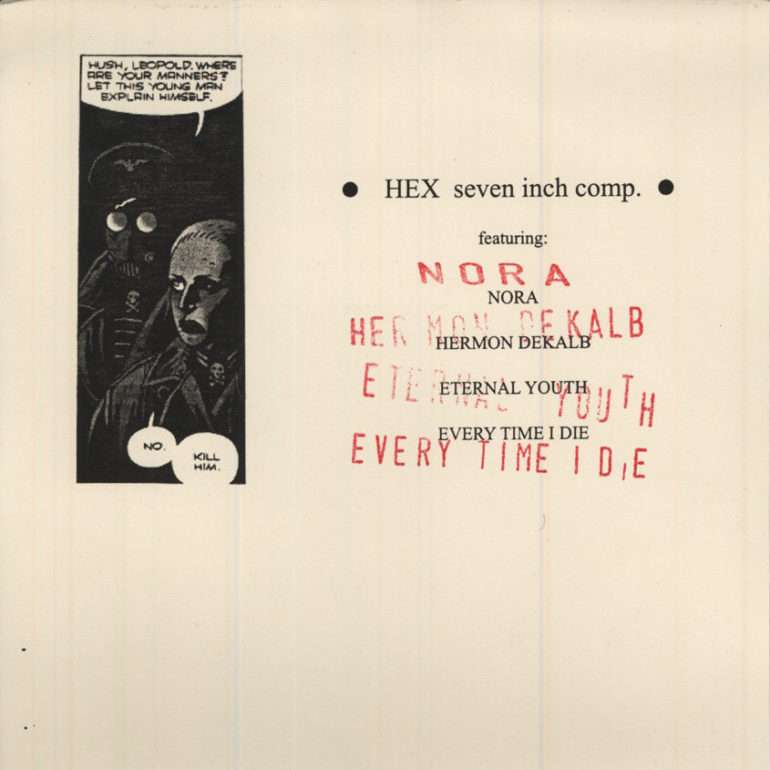 The Funeral were a heavy, scouring hardcore band from Syracuse, but they added some nuanced guitar lines and time changes that provided a unique flavor. Between 2001 and 2004, they recorded two full-lengths and several demos. Released on vinyl for the first time on March 15, the tracks are remastered for this double-LP in a gatefold jacket, complete with hundreds of pictures, flyers, and a booklet full of lyrics, live show retrospectives, and an oral history of the band.

No Idols play noisy, rocking punk with lots of feedback and screaming, akin to The Swarm, The Control, and Cursed. The Syracuse band’s 2006 debut LP features angry, bitter anthems of dissident noise with surprisingly catch rock bits, plus political tirades with a purpose and enough fury to match the spirit. No Idols played shows with Coliseum, Municipal Waste, Another Breath, Bones Brigade, Verse, Black SS, Attitude, and Bane.

Syracuse’s Ed Gein had four records on HEX, so truly, feel free to pick any of them. 2003’s It’s a Shame a Family Can Be Torn Apart By Something as Simple as a Pack of Wild Dogs edges out the others, but not by much. With its blistering noise and rapid-fire rampages highlighted by sample-laden segues of solemn and sardonic statements from “Donnie Darko,” Its a Shame… remains a classic, sought-after record. The band blended noise and grind, but really, they just vented on instruments. If it happens to fit a known genre, it’s serendipitous. Chaos recorded.

With more palatable approach, Night Owls sit apart from the noise-sludge-grind of other HEX bands, but that should not imply Night Owls were any less chaotic or punk or rocking. Like a Syracuse-based Hot Snakes, these dudes employed some garage sounds, fierce rock ’n’ roll, punk rock, and chaotic guitars. Catchy but raw, their 2009 self-titled release had six studio tracks and a 17-minute live set added. Brilliant and fierce.