It was a blast to talk to Bill, founder and owner of Dr. Strange Records, not only because he’s put out so many great records on his label over the years (read on to see just a few I was excited about), but also because, on a personal note, going through his lengthy mail order as a kid was part of my initiation into punk rock. The indelible mark this man and his label/store has left on the genre as a whole over the years is truly something to be celebrated and admired.

I remember being 15 and looking at the catalog in the hallway before homeroom in high school.

Eighteen years ago. I wish I could still do that. The printed catalog was really cool to do but…

That was so big.

I know. It wasn’t even everything. Imagine printing that. Print was really expensive and mailing it out to thousands of people around the world… It got to be so expensive. If I mailed it out to you from California, it’d go bulk mail and by the time you got it, a lot of the stuff in the catalog was already sold and a lot of new stuff already came in. But I do miss it. The artwork, I’d have my friends do the covers for it. It was fun. It was a challenge to do it, but it just became too expensive. It was like 5,000 bucks a month just to send them all out.

How did you first start?

I started with the mail order before I had a label and the actual record store. That was in October 1988. I’d been into punk since – well, I got into New Wave in ’79, meaning The Cars and Blondie, which I still love. Then in ’80, I got more into punk bands like Black Flag, Circle Jerks, the typical bands. And I was already going out buying records. I really got into collecting vinyl, so me and my friends would drive out to Hollywood or Long Beach, to all these cool independent record stores because this is obviously pre-Internet and you had to drive to the store to get them. Doing mail order back then was pen and paper. I liked the U.S. stuff and I also liked the U.K. stuff, so I found some mail orders, people who were doing the same thing I’m doing but 25-plus years ago, so I was buying records from them. Good example, I was buying X-Ray Spex records, which were pretty cheap from one place in England that, even with the postage, were probably costing me five bucks. When I’d go to Hollywood I’d see the exact same record, even back then, for 15 or 20 bucks. I thought why don’t I just buy a couple extra records and try to sell them to my friends? That way I could charge them a few dollars more. It’s fair for them; it’s fair for me. That’s really how it happened for me, just seeing people were getting screwed over and a real easy way for me to help them. And it just kept going and going and going with better and better contacts.

So when did you actually open the store? 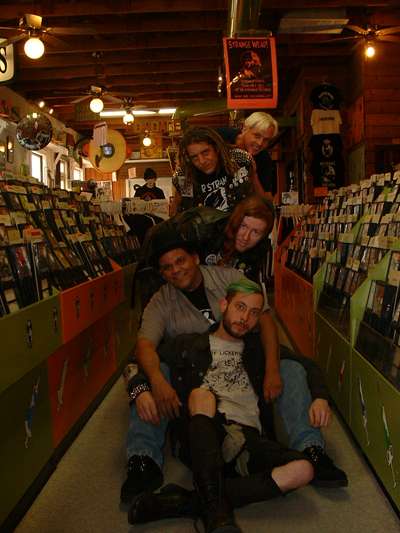 The physical store [opened] 16 years ago. But I just started out of my small two-bedroom apartment down the street from the record store. I had my friends coming over to help me and it got to be real crowded real fast. I moved into a house just up the street. Everything is within three miles. I still ride my bike to work. I had my apartment first, got married, moved into a house because then it got awkward to have three people – three of your friends but they’re also your employees – coming over to the house when you’re newly married, so we decided it’d be a cool thing to have a real record store. There was a part of Cucamonga, Alta Loma, it’s the same city, anyway this old downtown which I remember driving through, me and my mom in the early-‘70s. I didn’t remember the name of the street, I just kinda knew where it was. I was driving around for a week or two for places to rent. I drove up the street that used to be the downtown of Alta Loma. So I saw this building that looked like a shithole pretty much. I’m like no one ever drives up this street and it looks like crap and it doesn’t really matter as far as I’m concerned; I don’t rely on walk-in traffic, I have a name. So I was able to buy the store. It took four months to fix it up. That was it. It’s a cool building. It’s 108 years old, which I know that’s not too old for someone like you who lives on the East Coast, but for California that’s pretty old. This was like all vineyards. This was the second-largest grape-producing area in the country. Even when I moved out here, it was all vineyards. Now it’s becoming more suburban. People who live here drive into L.A., but the record store was the very first post office and the very first library.

That’s awesome. And I think of some of the records I have and these old bands I love and some of the later releases – The Freeze and CH3 and Broken Bones and The Threats – they put out on your label. How does that happen? Can you get into that a little?

The earlier stuff I did was more considered pop-punk stuff like Rhythm Collision or The Bollweevils. The older stuff like The Threats were on the back of my leather jacket. I loved that band from the minute I heard them when I was 17. I didn’t wanna release bands that were basically a rip-off of these bands I just held in such high esteem. I wanted to do something different and something new. And I never released something I didn’t like. I love that stuff – I still listen to Bollweevils and Gameface. They’re great bands. But then with the store opening up, I was selling a lot of records. Everything I put out sold pretty well and then when the store opened, I really put my focus on [that], trying to make it the coolest store. If someone came in and asked for something, I’d have it. I laid off the label for a year, two years, I didn’t do that much stuff and then when I came back to it I started releasing things I really did like as a kid like The Freeze and The Threats, or Government Issue.

Oh, I totally have that retrospective you put out.

If by chance that old band, after I release their old stuff, if they’re still out there – like Threats or CH3 – and they wanna do something new, then I do that too. The label’s always been just for fun, a hobby. In the mid-‘90s it really took off, I was selling a lot of records like Voodoo Glow Skulls, Skankin’ Pickle. It’s cool, but I still put out records and nowadays I’m happy to sell 500 records, whereas before I could sell 50,000 records. It’s always been for fun. I wanna put out good music by cool bands.

I was gonna say that. It doesn’t matter if you like it, I’ll put music out for myself. It’s kinda selfish, but I think I have good taste in music.

Yes, I think so…! Even one I just realized you put out, Partisans’ Idiot Nation.

That’s another band I love. 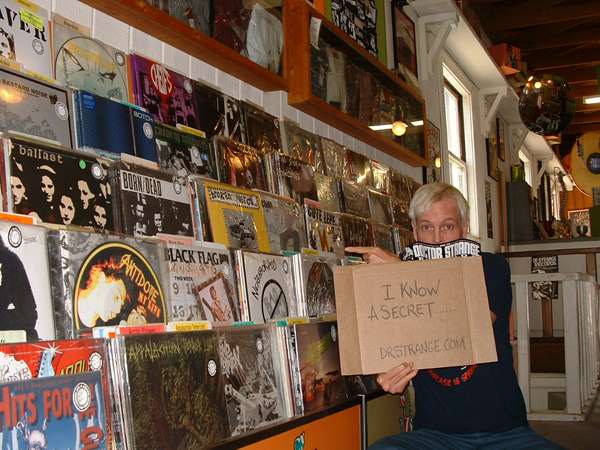 Speaking of a great band, did you do a reissue or was it something else with The Cheifs?!

I love The Cheifs!

Oh my god. When I heard that record – my boyfriend had Hollywest Crisis – I’m like are you kidding me?!

That was a great band. I just put that record out because I have that 7” they put out and I’m like no one really knows this band, but they’re such a great band, they’re one of my top 10 bands. I love The Cheifs. I was lucky to do that.

Can you tell me a little how it happened?

One of the mail order customers was friends with one of the guys in The Cheifs and he got me in touch. He was like, they wanna release this stuff. That’s one band I would kill for. I did it on CD and on LP.

It’s early in the year, what are you…

The next stuff I have coming out…

That was the question, thank you. [Laughs]

There’s a local band who’ve been around for at least 10 years, they’re really super-good. If you haven’t heard them, I know you’ll like them because they have a real early-‘80s Southern California sound called Narcoleptic Youth.

They’re bitchin’. This new record is awesome. I’m really excited about that. And another band, this is kinda cool because I put out a band called Schleprock, that was in the early-‘90s. Doug, the singer, started The Generators. I’m gonna re-release the first Generators record on vinyl and Doug and the guitar player have a side band called Bedlam Knives, it’s very Generators-esque, I’ll do a 7” of theirs and then I’ll do a full-length for Bedlam Knives.

So before you said the first stuff was out of your house. Do you remember the first record you did?

It was a local band. I went to Upland High and in the early-‘80s there was a band called Manson Youth. They had a tough guy [persona], but they really were! Don’t fuck with these guys. It wasn’t an act. They weren’t evil, but you wouldn’t wanna take them home to your parents. [Laughter] They were a really cool band and probably four years later the singer, DJ, was living in the same apartment complex I was living in and we became friends and releasing a record was a goal. I just wanted to release one record just to say I did it. And I got in touch with DJ, he’s like I have thousands of songs that have never been released. I’m like let’s put out a 7” from Manson Youth. It’s good early-‘80s SoCal punk rock. So I released that and it sold really fast. I don’t know how or why, but it did. And because of that I’m like, oh, I’ll do another one. I think the next one was Rhythm Collision.

Did you go to any school for business or anything?

No. A lot of people ask me that. Going to school is a great thing. Going to business school… Either you get it or you don’t. If you don’t get it, then you should go. It just seemed kind of simple. You’re always learning. But I always thought, either you get it or you don’t. My goal was always just to have enough money to get by and to have fun. You have to have realistic goals. But I am a good worker, and I do work a lot of hours still because I love it. You gotta do it because you have passion for it. Don’t do anything for money. You gotta do what you like. It doesn’t feel like a business to me. It’s a movement. It is a business technically, but I make money from punk rock, I don’t make money off of punk rock. There’s a huge difference. 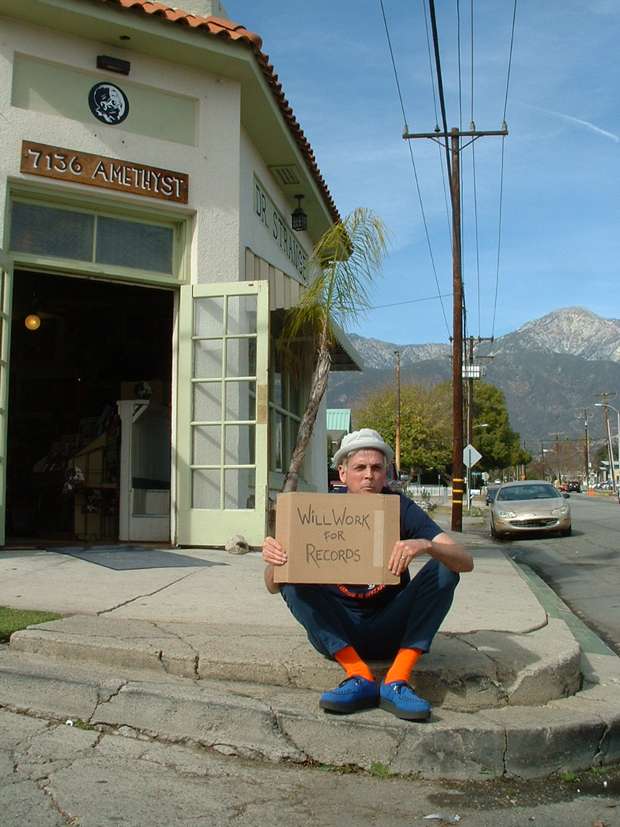 PrevInterview: Autopsy Loads Up On ‘Tourniquets, Hacksaws and Graves’
Interview: Matt Woods Talks About His New Album ‘With Love From Brushy Mountain’Next