Dan Goldin loved the music he heard coming out of his local music scene in Boston so much that he couldn’t keep his fanaticism to himself.

“The bands in Boston that I was going out and seeing every night on a weekly basis, like Grass is Green, Pile and Fat History Month, were some of the best bands that I’d seen ever,” he says. “Not just locally, they were the best bands I’d seen period.

“I just thought that the time was right to start a label.”

With that, Exploding In Sound Records was born out of little more than a desire to document the bands and music coursing their way through Beantown’s bustling independent circuit. But despite those humble intentions, Exploding In Sound, which Goldin now runs out of Brooklyn with his partner Dave Spak, has emerged over the past year as an up and coming label of repute, one with a particularly deft ear for the soaringly melodic guitar rock that defined much of the 90s indie rock landscape. The label put out early releases by Speedy Ortiz, while 2013 also saw the release of a slew of other juggernaut releases from the likes of Ovlov, Fat History Month, Palehound, Two Inch Astronaut and others.

As good as 2013 was t the upstart label, 2014 could be even bigger, Goldin says. The label is readying new releases from bands such as Grass is Green, Krill and Disco Doom, and also is in talks of hosting a showcase at South By Southwest in March. We talked with Goldin about the label’s roots, its growth, working in Brooklyn and the hustle of managing a label as a side gig.

Was there a common thread behind these bands, either aesthetically or sonically, that made you want to bring them together and start releasing their material? Or was it something as simple as putting out the music you liked?

It was basically the latter. We weren’t necessarily going for one sound or trying to unify a theme or anything like that, you know? I’ve always felt and continue to feel that these are bands that more people should be listening to. I figure I might as well do all that I can do to make that happen.

Was it always a goal for you to start your own label? How did you arrive at the decision to start Exploding In Sound?

Yeah, I’ve wanted to do that since I was a little kid. When I originally started Exploding In Sound, it was a blog. The idea was I could do this however long I needed to until there’s a ready-made audience for the label, and that’s how it ended up working out.

Bring us back to the beginning. Who were the first bands you gravitated to?

Grass is Green, Pile and Speedy Ortiz were the first three bands, and we stuck with them for a long time. Then we just slowly started adding more. Two Inch Astronaut, I knew them through Grass is Green. They played in a band with those guys before the two bands started. It’s all pretty family oriented in terms of how I know the bands on the label. It’s just a matter of a bands that I love saying ‘Hey, we’ve got a new record. Do you want to put it out?’ It’s just like ‘Well if I have the time, then why not?’

From those humble beginnings, it must be a trip to watch a band like Speedy Ortiz make the strides that they’ve made this year.

It’s amazing. I’m just thrilled for them. I don’t really have a lot to do with any of it anymore since they signed to Carpark (Records), but I’m so happy for them. It’s really cool that they’re playing with all of these bands that they’ve idolized. Right now they’re on tour with The Breeders and then they’re touring with Stephen Malkmus. It just seems like they’re crossing things off of the bucket list every few months (laughs).

Are there any pressures that come along with having that kind of unexpected success?

I think I always put pressure on myself. You want every new release to be as successful as the last release. That’s not always going to happen, because different releases appeal to different audiences. But honestly, we try to give every record the same fighting chance. It’s like you learn something new everyday. It’s a growing experience, and I feel like as time moves on, people’s awareness of the label is definitely growing. I’m thrilled and thankful for all the support that people have given us.

Exploding In Sound started in Boston, but you’re now based out of Brooklyn. How has being a part of that growing Brooklyn scene benefited the label? 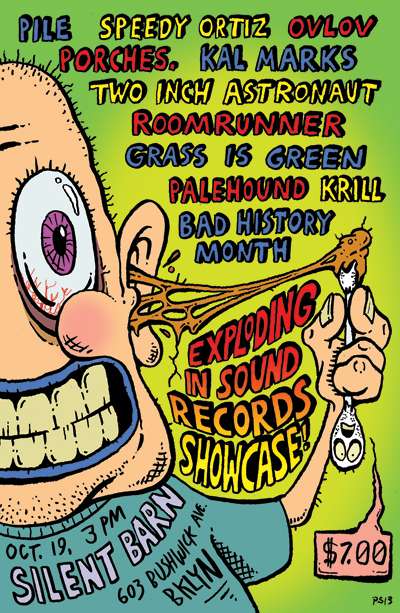 Yeah it’s great. Brooklyn makes it easy on bands in a lot of ways. Not only are there a lot of great bands, but there are so many great venues where people come out to shows. Boston used to have that, but once house show got shut down, the number of places people had to play became really limited. Here, you can pretty much book a show any night of the week. There’s enough choices that you can always put something together. There’s just tons of DIY spaces where if you bring them a good bill, they won’t think twice about putting on a show. There’s really not a lot of politics to it.

Is the label a full time thing for you, or is that a goal you’re still working toward?

Yeah, we’re nowhere near being able to do it full time. I have a regular 9-5 job. I try to do as much as i possibly can while I’m at work. It’s a desk job, so sometimes I can and sometimes I can’t. When I can’t, it’s a matter of getting home from work and doing as much as I possibly can until I can’t look at a computer screen any longer. But there’s nothing else I’d rather be doing, so I can’t complain.