If Bad Religion were an 8-bit video game, Shawn Daley would be the man composing its soundtrack. Daley, 27, of Toronto makes his living as a comic artist — and a socially conscious one at that, as he is currently creating a comic series chronicling the city’s homeless community, with 100 percent of the proceeds going to a local shelter. But he also spent five years working full time for a recording studio, and his passion for punk music recently led him to a music project no one could have seen coming.

Immediately following the release of Bad Religion’s True North in January 2013, Daley started creating chiptune covers of those Bad Religion songs, expanding upon the originals he has done for nearly a decade. The songs — which can be heard in the SoundCloud player below (click play and read!) — immediately grabbed the attention of punk funs. We exchanged emails with Daley to find out how it all got started and what’s to come.

How did the chiptunes thing get started?

Being a bored teenager certainly helped. Back in the day, my friends and I discovered an audio program that had 8-bit-style sounds. We would all compose these absolutely awful 8-bit songs and email them to each other in some desperate effort to entertain ourselves. I guess I just never stopped doing that. After discovering certain programs and plugins (and a ton of experimenting with sounds) I found a style I liked and began just having fun. Actually, I’ve still got about 70 of those abhorrent 8-bit musical catastrophes from the old days on my computer. Time to destroy my hard drive. 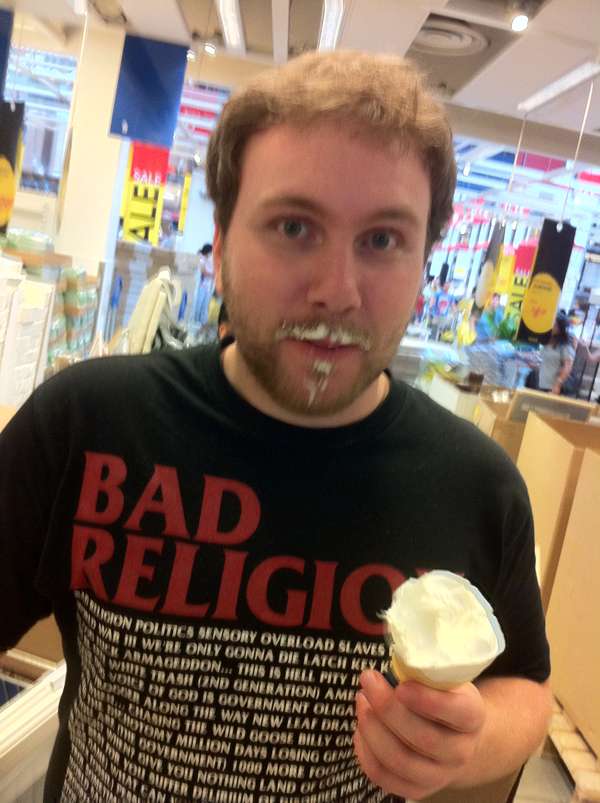 Why has Bad Religion become such a focus?

Bad Religion has always been one of my favorite bands, and coincidentally, they translate incredibly well to 8-bit music. Most punk bands will, because the genre is not usually technically complicated. Fast repetitive rhythms and smooth simple harmonies work wonderfully in 8-bit. And, because Bad Religion is one of the best punk bands of all time, how could I not want to focus on them?

What is your process? How do you pick which songs you’re going to do, and then how do you attack them from there?

After I released the first batch of Bad Religion covers — from True North — I received a ton of requests for older songs, all of which are written in a list on a whiteboard in my studio. It’s a huge list, so I’ve got my work cut out for me. That said, I’m always happy to know what the fans want to hear. The more requests, the better. Having worked in a recording studio for five years, these 8-bit Bad Religion songs are constructed in the same way I would track a punk band. Starting with basic, simple “guitar” tracks, moving on to drums and bass, then vocals and harmonies.

How long does each one take?

Each one takes about four hours — closer to six if I’m distracted by Twitter, which always seems to be the case. Not that I’m complaining, as that’s how I receive the bulk of the requests.

Have you received any sort of acknowledgement from the band — either, like a “Hey, these are awesome” or “Seriously, cease and desist”?

Actually, Mr. Brett retweeted the “True North” 8-bit cover, which was pretty cool. And when I say ‘pretty cool,’ I mean I spit water all over myself when I saw the Twitter notification.

Any plans to bring any other bands into the mix for 8-bit covers?

I’ve got some NOFX on the way. Currently working on one of their ‘longer songs,’ I guess you could say.

* Since the interview Shawn has posted a couple NOFX 8-bit covers. Play below.

What about the originals you do? Are they inspired by anything in particular?

Growing up with some legendary 8-bit soundtracks — Mega Man, Castlevania, Pokémon etc. — certainly influenced the originals I produce today, particularly Mega Man 2. That game has a near perfect [original soundtrack]. A lot of [1990s] punk music from bands like NOFX, Thrice and AFI are also a huge influence. Children Of Bodom are up there, too, for their neoclassical leads and melodies.

You also play bass. Have any music projects going on right now?

I’m currently playing bass for a young acoustic punk artist named Jenn FiorentinO here in Toronto. We just wrapped up her second studio album, and the masters just came in — truly incredible stuff. She opened for Propagandhi last time they were in Toronto. I also play bass for a Toronto punk band called Foresight For The Blind. Even when the schedule is packed, I’m always looking for new projects to play on.

Tweet Shawn a Request @ShawnDaley and let him know @NewNoiseMags sent ya.

PrevInterview: Betrayal on the most comfortable sleeping position imaginable and the appropriate time to play their music
Interview: Queen V on great memories of New York, Los Angeles, songwriting, and moreNext