A Slightly Intoxicated Interview with Laureate

About a year ago, I came across a three-song demo from Montréal-based band Laureate. It had been a while since I’d heard a band successfully pull off the 90’s sensitive pop-punk thing, and I wanted to let the rest of the world know about them.

Fast forward to today, Laureate have come a long way. They’ve sold out the first run of their fantastic, super catchy first EP Leave a Light On, they have opened for their favorite bands and are getting ready to play one of their biggest shows ever at Pouzza Fest [as of the conducting of this interview]. As I hang out with the band in the backyard of a bar, they try to minimize their success with a lighthearted (and slightly intoxicated) attitude, probably because making music with your long-time best friends doesn’t really feel like work. Their complicity, however, seems to work in their favor; just a few hours later, Laureate has a full house singing along to all their nostalgic songs, the way that seasoned bands with an established following and long touring histories do. Maybe it’s because they’re easily relatable; hopefully it’s because they’re that good.

You guys were active for about two years before you released Leave a Light On on Pouzza Records. I assume you already had enough material to record an LP, so why did you release an EP?

GT: We decided to release an EP because we wanted to put something out there that just sounded like us. We would have liked to spend a lot more time in the studio, but at this point we’re still paying for everything ourselves and we’re just trying to get the wheels turning.

Erin Power: We don’t have the Foo Fighters’ production behind us, but I think we recorded some decent songs.

So you’ll have new material out soon?

GT: We are recording two new songs right now. We have a bunch of new stuff, but we just want to keep our momentum going and have something else recorded. We’re working with Marc André Beaudet, who did the mixing for the EP. Hopefully we’re going to put these songs on a split or do some sort of two-song release.

Tell me a little bit about the songs on it; which are your favorites?

GT (getting really excited): My favorite song on the EP is “Epic”. I love it so much because I know exactly what I want it to sound like. Nobody else agrees with me, but it’s a great tune. If I had a million more dollars I would have made that song sound, well, epic. But hey, we’re on a budget. “The Decay” sounded great too.

How many copies of Leave a Light On have you sold so far? I heard you guys ran out pretty quickly.

GT: We’ve sold pretty much a million copies. Was it a million?

GT: I bought a helicopter the other day.

So I guess that means that we’ll see you in the US soon, right?

MT: We’re doing two weekends in the US in June and July. We were hoping to tour more in August, but we still have to book it.

GT: We talk about going on tour all the time, but we all have jobs…

EP: But we also have vacations, and we have a booking agent!

GT: We’re going to New England to play some shows soon. We’ve actually never been to the US on tour before, so we’re pretty excited. 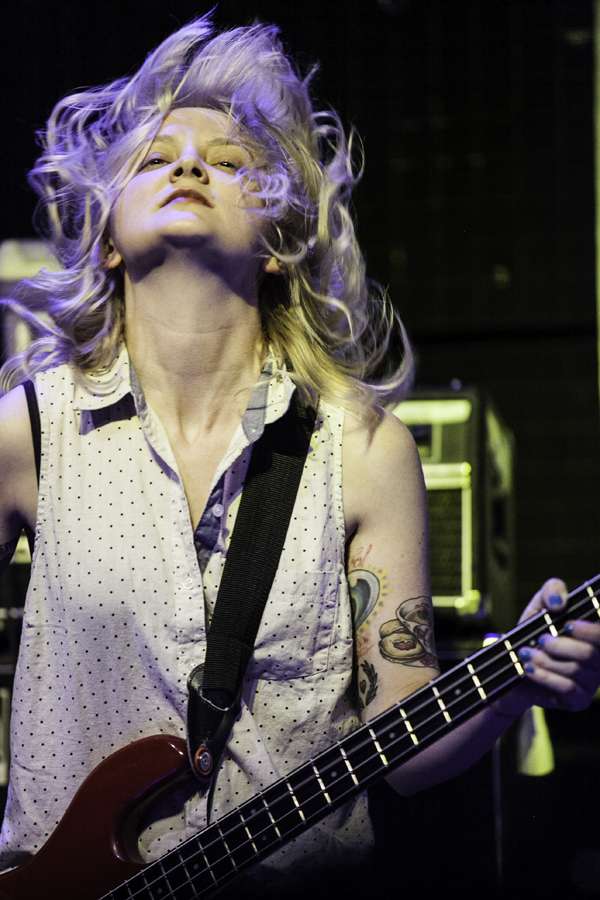 I think it’s time for you guys to take on more ambitious tour plans and visit us, especially after the huge show you’re playing tonight at Pouzza Fest.

GT: I don’t go to a lot of shows, but the show we’re playing is the one I would have wanted to be at anyway. To be able to even be on the same stage as New Found Glory, Crime in Stereo, Lemuria and Grade is such a trip. We’re all a little bit older and this is a hobby for us, so to be able to play such a cool show is just awesome.

EP: Also, according to the ladies at my work, he’s the best looking member.

GT: Mike is the most handsome. Mike, how are the boobs at Pouzza Fest?

EP: Mike’s here for the ska.

GT: Ska kids are the best! We played a ska show last week and it ruled. Everyone was in a good mood, there was a conga line… We sucked, we played one of our worst sets ever and everyone was all smiles and slapping high fives. We should just be a ska band from now on.

EP: Everyone was buying our record even though it was one of our worst shows ever.

I heard that all of you except for Gian got Laureate tattoos recently. What’s up with that?

MT: What do you mean? That’s three quarters. That’s the highest you can get without getting 100%.

GT: Yeah, but, whatever. If we were Larry and His Flask, that would be like six of the twelve members… Wait, that math does not add up. I’m dumb.

(Mike and Erin are laughing hysterically)

MT: It would be nine.

GT: So, say three of the members of Larry and His Flask opted out of getting a tattoo. I’m one of the three that opted out.

EP: You don’t put a bumper sticker on a Mercedes.

MT: You do a paint job, though…

GT: You can do a candy apple green paint job on, like, a ‘59 Impala. But at that point I’m going all in.

MT: What about racing stripes on a Mustang?

GT: You’ve never seen my racing stripes before, I’ve got them.

GT: This is going to make no sense when we’re all sober.

…I bet you guys have great stories from your weekend tours.

GT: Mike, can you tell Maria about that time I gave you an eating disorder?

MT: The time that you guys all tried to call me Fat Mike on tour?

GT: Once, Mike tried to eat as much dinner as me.

MT: Basically, Gian ordered three meals for himself. I sat down next to him and tried to do the same thing. I made it through 75% of it, or nine twelfths [laughs] and then laid down on a couch for three hours thinking I was dying from eating too much while Gian ran around having a blast and drinking beer. I finally threw up and then discovered that I could lose weight that way, so they tried calling me Fat Mike for the rest of the tour.

GT: This one’s mine, and that one’s also mine. (laughs)

Matt, you’re the newest member of the band. How are these guys treating you so far?

Matt Garies: I love playing with Laureate. I use a guitar strap with flames on it.

[Gian yanks the phone off of my hands]

GT: Matt, would you rather only be able to text in emoticons or only have access to a landline phone?

GT: That’s a bold statement, because what happens if you get to, like, the movies, you’re supposed to meet your friends, nobody’s there, you don’t know where they are, and then you have to go find a payphone?

MG: Well, in the opposite situation, texting them a heart wouldn’t get me anywhere.

GT: Like, if someone texted me some popcorn, that would mean they’re at the concession stand.

MG: I have a Blackberry.

MG: They’re the equivalent of a payphone.

GT: So how do you feel about Alicia Keys as the cultural ambassador of the RIM company? Do you think she can bring RIM back from the brink?

GT: She does have a RIM job. Alicia Keys now has a RIM job.