There’s a lot of mixed feelings that come with a tribute album. On the one hand, it might be the highest compliment that can be paid a band or artist. The world’s full of great bands, most of which will never see the day where their music is honored and immortalized by their peers. Record sales and acclaim are one thing, but knowing your music will be remembered long after you’re gone is the one hallmark left behind by all great artists.

But despite the gesture, tribute records also act as a bittersweet reminder of what will never again be. August 1, 2012 began as a day just like any other, and fans who lived off the sugar high of 90s and new millennial pop punk had no reason to think that it would mark the end for one of the scene’s cornerstone bands. Except it did. Tony Sly’s death brought No Use For A Name’s 25- year run to a halt, but more importantly it robbed the punk scene of one of its best and most versatile songwriters. Bands, all of them, inevitably come and go. But in NUFAN’s case, there wasn’t an element of choice. The band had slowed down its pace some in recent years, but fans weren’t anticipating the end.

So while a tribute record in Sly’s honor was more or less inevitable, it’s also unfortunate. I for one would rather have just one more NUFAN record or Tony Sly solo record, regardless of the quality, than a premature tribute record honoring the life of a songwriter gone too soon. My own memories of NUFAN are tied to my youth. Once Green Day and Rancid hit my musical nerve center in 1994, punk rock became my calling. I quickly jumped on board with the rest of the Epitaph Records and Fat Wreck chords catalogs, and from there it was Pandora’s Box. Listening to one band opened up the doors to another, then another and another. Through Rancid, I learned about NOFX, through whom I eventually found my way to NUFAN’s ¡Leche Con Carne!. That was about 15 years ago, and although my fandom has waned a bit as my musical viewpoint expanded beyond the realm of mohawks and mosh pits, it’s sad to hear news of the passing of someone who helped play a small part in shaping your formative years.

The one consolation is that The Songs of Tony Sly: A Tribute comes from an honest place, and the covers contained within do tasteful justice to Sly’s back catalog. Some acts play it relatively straight, save for a few choice wrinkles (Strung Out’s cover of “Soulmate”), while others step outside the box to reveal another side of the material (Alkaline Trio’s stripped down take on “Straight From The Jacket”, or Swingin’ Utters Celtic touch up of “Not Your Savior”). There are contributions from younger acts who were bred in part on NUFAN’s frenetic brand of melodic punk (A Simple Plan, the Flatliners), peers who stood by their side as they navigated the underground trenches (NOFX, Joey Cape) and still others who helped influence Sly and NUFAN along the way (Bad Religion). There are old favorites (The Miracles’ slowed down version of “Coming Too Close”) and choice cuts from Sly’s solo work (Brian Fallon of Gaslight Anthem’s take on “Capo 4th Fret”).

That’s a long way of saying that the record has a little something for everyone. But the credentials of the record come second to its thought and intent. The Songs of Tony Sly is an emblem of the spirit of togetherness that the punk community prides itself on. Unfortunately, we don’t have the luxury of choosing who comes and goes in life, nor do we have a say as to when. But we do have a say as to how we choose to remember those who leave us. To that end, the record sends Sly off on an appropriately heartfelt note.

Fat Wreck Chords is donating all proceeds from sales of the record to the Tony Sly Memorial Fund. For more information, visit www.tonysly.org.

How did the record come together? Did you know right away that you wanted to do a record to memorialize Tony?

We started talking about a tribute album very shortly after Tony’s death. It seemed a very natural progression for us. NUFAN was the second band we signed at FAT, and a huge part of our family. It seemed only natural to want to honor Tony’s music and his legacy in some way. It also helped us with the mourning process (to have something positive to focus on and remember him by).

What was the process like getting bands involved and dividing up songs between the bands? Was it first come first serve? What conversations did you have with the bands who were involved? Did you point them in any specific direction, or was each band free to interpret the material as they saw fit?

Well obviously we had our own ideas about what Tony’s “greatest hits” were. We tried to have a balance of his solo career and NUFAN songs. For the most part, we let the bands choose what songs they wanted to cover. However, we definitely had guidelines. We wanted the record to show the diversity of his music; therefore, we advised bands to change the tempo or the melody or the direction of the song. For example, if they were covering an acoustic song, we wanted them to punk it up a bit, and vice versa. (Fat) Mike was very involved in helping bands choose which songs to cover. He had very specific ideas about how he wanted this album to play as a whole.

What are your earliest memories of Tony? What did NUFAN’s music mean to you?

FAT signed NUFAN in 1993, when I was 25 years old, so obviously I have a long history with Tony. I remember seeing the band in a small club in San Jose, and even then being mesmerized by Tony’s vocals. He had a way of drawing you in and making you feel that he was singing directly to you. On a personal level, Tony is one of the funniest people I’ve ever met. FAT has always been more of a family than a business, so I don’t think I can over emphasize what Tony and No Use For A Name meant to us. They are a huge part of who we are and shaped our direction as a label. More than being business partners, Tony was a close and personal friend. His absence is felt every day at this label.

The record is obviously being done in Tony’s memory, but what does the record mean for you? What was the experience like participating in something like this?

This record is bittersweet to me. On one hand, I am very proud of it. I think it’s a beautiful album and an amazing tribute to such a musical talent. On the other hand, I truly wish it didn’t exist. There are times that I wish I believed in an afterlife because it would bring me great joy to know that Tony was somewhere else enjoying this great tribute in his honor. But if nothing else, I know that we have done our friend and colleague a great service, and that we are helping to provide for his wife and children in the future.

How did you settle on the song you chose to cover for the record? Were there others you were considering?

Tony Sly’s songs are powerful and moving to begin with and I identify with them. There were so many great songs to choose from. I know a lot of them from touring and accompanying him. I guess “International You Day” was a no brainer though. It’s arguably one of his greatest musical accomplishments. I almost lost it to Frank Turner. But I saw the way people responded to it at the gigs I played with Tony. It never failed to be the best song of the set. I just love that song. I knew I had to fight for it. Lagwagon recording “Discomfort Inn” was something entirely different. It represents a lesser- known part of his catalog. So many of his acoustic songs are so good and some of them have his best lyrics in my opinion. “Discomfort Inn” is a perfect example. I believe the lyrics stand on their own as great writing and the melody is amazing as well. It is one of the last songs Tony wrote and also one of his most powerful songs. I play it live now on acoustic and I can barely get through it. I had considered many songs but some of songs were already claimed by others and i know Fatty had been instrumental in these choices. He had a vision and was very smart as always in his suggestions for some of the bands.

What are your earliest memories of Tony? What did NUFAN’s music mean to you?

I remember meeting Tony at the first show Lagwagon and No Use For A Name played together. It was at Gilman Street, I believe with NOFX and Pennywise, or Rancid. There’s a flier somewhere [laughs]. A lot of the old shows blend together in my memories. But I remember meeting him there. He was as always funny and charming. I liked him immediately but really didn’t get to know him until much later in our lives. No Use For A Name’s music was a great parallel in my life and especially to Lagwagon’s music. His/their music was always like a tool of measurement for my songwriting and my band’s respective success. Tony was great from early on and I was always pleased to hear a new No Use album, but admittedly a bit scared too. There was always mutual respect and a bit of healthy competition between the original Fat bands and of course a desire to impress our forefathers as well. NOFX, Bad Religion, Descendents, etc.

The record is obviously being done in Tony’s memory, but what does the record mean for you? What was the experience like participating in something like this?

I am so pleased that Tony’s amazing songs are being portrayed in such a flattering way. So many tribute albums fall a bit flat for me, regardless of how great the material being covered is; the Tony Sly Tribute does not. It is so good and so refreshing. It isn’t just another single genre representation of a songwriter’s music. It’s a well- realized document of the depth and beauty in Tony’s catalog. Many band’s or artist’ recorded surprisingly deliberate and inspired versions of his songs. I am so proud to be a part of it. And equally proud of Mike, the others at Fat Wreck and the bands for there commitment and attention to the fine details. Tony Sly has been properly honored here.

Purchase The Songs of Tony Sly: A Tribute here:
http://www.fatwreck.com/record/detail/915 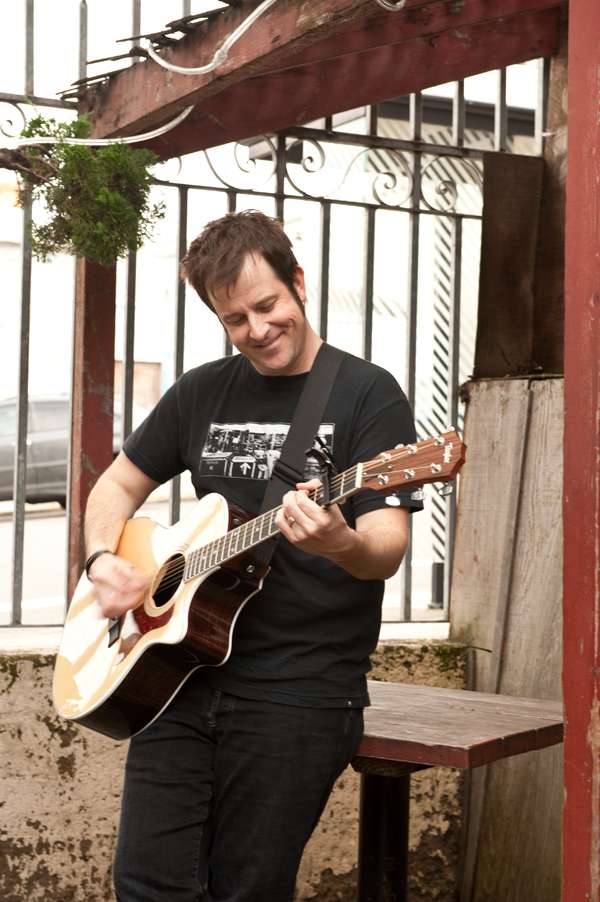 PrevInterview: Man Must Die Has Some of the Heaviest Riffs Known To Man
New Keepers Of The Water Towers on belief, influence, and The Cosmic ChildNext