Profound Lore Records have announced the impending March release of Untopia, the second LP by Japanese metallic hardcore outfit Kruelty. The band’s first offering off of the new album, “Burn The System,” boasts a crushing production and the band’s signature, punishing beatdowns. Untopia will be released March 17 on LP, CD, CS, and digital, through Profound Lore Records.

Of the new single, guitarist Zuma writes: “Musically, I put massive Swedish death vibes on it, as I don’t think we had any of those songs before, but it’s still Kruelty for sure. I wrote the lyrics on this song, too, and the theme is how working-class people like us live every day. So basically, we chose this song for the first single to reveal how we improved from the last album. Hope you guys will enjoy some new Kruelty. Thank you!”

Formed in Tokyo in the summer of 2017, Kruelty have emerged as the most notable artist to find that sweet spot where heavy beatdown hardcore and ‘90s American/Scandinavian death/doom metal meet. This devastating amalgamation becomes the blueprint of brutality and slam the band unleashes. With Kruelty, you will hear the ultimate convergence of some of the most punishing death metal riffs and the most damaging breakdowns influenced by Japanese and ‘90s East Coast hardcore bands.

Twenty-twenty saw the release of Kruelty’s debut album A Dying Truth and revealed itself as one of the heaviest albums that year. With their second LP, Untopia, the band will release an album even more massive in scope and ultimately heavier than their debut. The bulldozing, seven-song record was produced by Taylor Young at The Pit Studios (Nails, Xibalba, Section H8) while the band was touring in the U.S. earlier this year, mastered by Brad Boatright at Audiosiege (Obituary, Terminal Nation, Mindforce), and features artwork by Norwegian artist Sindre Foss Skancke. 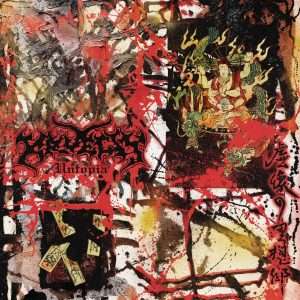