Philly hardcore heavyweights Jesus Piece announced their upcoming album, …So Unknown, which will be released through Century Media Records on April 14. The band unleashed their first single “An Offering To The Night” back in December, immediately locking listeners in with their signature ferocity and utterly heavy tone.

Leveling up the intensity both sonically and visually, Jesus Piece offer their pummeling new single, “Gates of Horn.” Its accompanying video, directed by Eric Richter, takes viewers through a series of recurring nightmares to create a complete experience that’s as hair-raising as it is heavy.

Jesus Piece gallantly broke onto the scene, turning heads for their feral live shows and grandiose, melodic songwriting which has since cemented them as standard stirrers and boundary-breakers. On …So Unknown, their Century Media debut, listeners ascend to the apex of metal and hardcore, where a mix of complex instrumentation is led by a manic, shaman-like vocal delivery from frontman Aaron Heard. It’s a cluster bomb of 10 anthems, bursting at the seams with memorable riffs and pulsing with fresh ideas.

Co-produced and mixed by Randy LeBouef (Every Time I Die, Orthodox) and clocking in at a lean and mean 28 minutes, So Unknown documents the lives of the bands’ five members as they step into life’s abyss and react to the changes.

Drummer Luis Aponte (LU2K) promises, “This is as close to a Jesus Piece experience as you’re going to get without standing in front of us.”

Jesus Piece have created an effort that never fails to impress, gets to the point and never gets in its own way. And much like their frantic live show, their patented mid-tempo sound is only a jumping off point to chaos-ably utilizing half-speed breakdowns, left-turns into riffage at breakneck speed, and moody ambient atmosphere effectively. 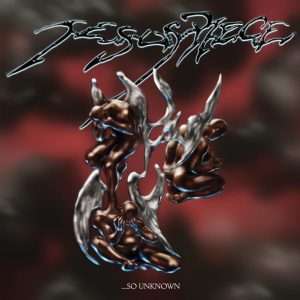 Next month, Jesus Piece hit the road for an extensive North American tour with peers Show Me The Body, Scowl, and ZULU. Full list of dates and tickets can be found here.
__

Watch the video for “Gates Of Horn” by Jesus Piece here: