Born on the wings of pestilence out of a 30-year slumber, Plague Bearer ride into our diseased world with a vision of Summoning Apocalyptic Devastation. Primarily known as a primitive blackened Satanic brother to Seattle death metal legends Drawn And Quartered, Plague Bearer have produced a string of underground demos and EPs over the years but never committed to a definitive full-length until now. Summoning Apocalyptic Devastation delivers a devastating triple-pronged vocal assault supported by brutal melodic riffing and pummeling drums heralding the end of this pathetic existence. The purpose of the band? The master of 666 riffs has but one word: “Evil.”

Plague Bearer in their most primordial form created death metal demos in 1993 and 1994, but lineup changes resulted in a rebranding to Drawn And Quartered in 1996. Nevertheless, guitarist K.S. Kuciemba (Drawn And Quartered, Draghkar, Serpent Rider) was determined to keep the Satanic flame alive, slowly amassing simpler, eviler blackened riffs with partner H (Drawn And Quartered, ex-Vetus Obscurum) and putting out a demo in 2001 and EP in 2006 with Nuclear Winter Records. In 2017, K and H reunited with longtime ally T on drums, along with vocalist Nihilist (ex-Abazagorath, ex-Lord Gore, ex-Thy Infernal), to infect the Pacific Northwest with live rituals. 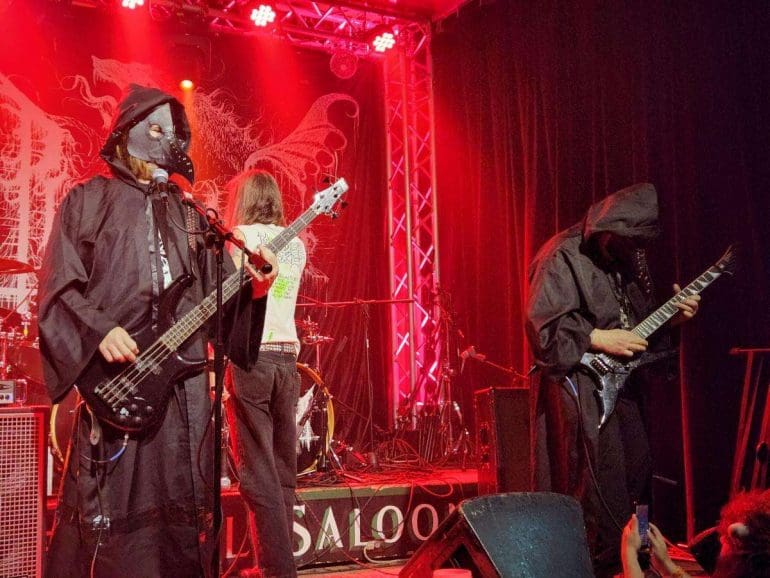 From the first second, Summoning Apocalyptic Devastation explodes into an orgy of double bass and crawling tremolo riffs in celebration of Unholy Black Satanic War Metal. Although there is a clear lineage to be traced from the earliest days of extreme metal in Plague Bearer’s sound, the music has slowly drifted through time untouched by modern trends. The sinister melodies of “Defiled By Sodomy” throb and groove in a hypnotic hymn to Lucifer, punctuated by stuttering double kick and cymbal flourishes. The members of Plague Bearer are all on the wrong side of 50, but there is an unmistakable youth and vigor driving the album, and album closer “Christbane” bets it all on the stomping Satanic energy of its Venom-esque main riff.

The production of Summoning Apocalyptic Devastation is clear without being sterile, allowing every instrument to freely breath and speak. Guitars, bass, and vocals were self-engineered at K.S. Kuciemba’s home studio The Plague Pit, while drums were recorded with Jon Schluckebier at Radioactive Recording. Mixing duties were handled by Andrew Lee (Ripped To Shreds) who contributed a guest solo on “Rise Of The Goat,” the album was mastered by Loic Fontaine of Krucyator Productions, and the record was completed with cover art by Thomas Westphal/Necromaniac and layout by Obscure Visions.

While Summoning Apocalyptic Devastation is laden with the legacies of its storied members, it never loses its individuality. Existing beyond the stylistic trappings of death and black metal, Plague Bearer raise a middle finger to the modern scene. Evil is the only way! The album is a must-hear for fans of Drawn And Quartered, Imprecation, Thy Infernal, and Fallen Christ.

A brief teaser for Plague Bearer’s Summoning Apocalyptic Devastation is playing on YouTube:

Summoning Apocalyptic Devastation will be released on LP, CD, and digital formats through Nameless Grave Records on March 3. Stand by for audio previews, preorders, and more to be issued in the days ahead. 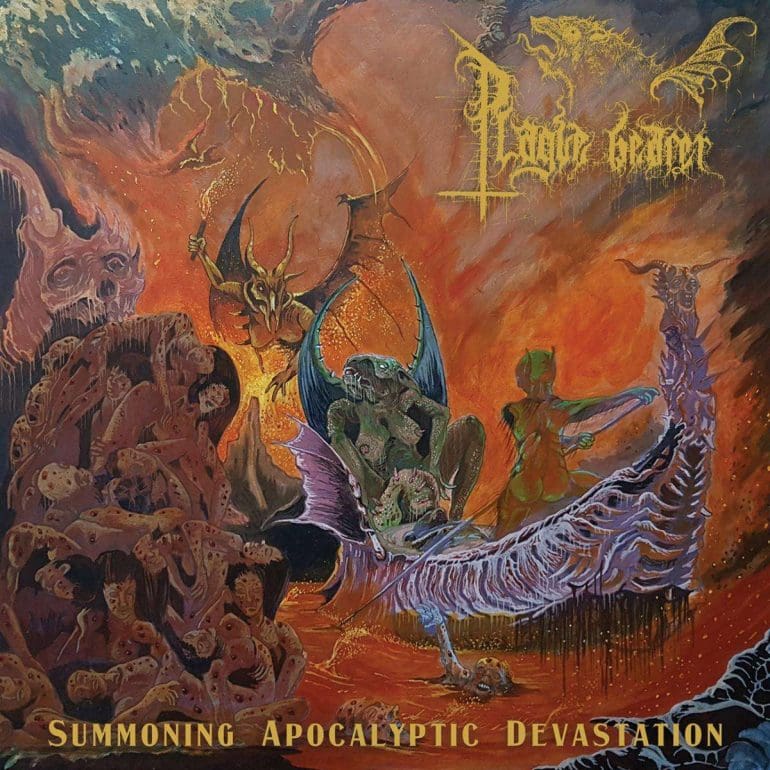