Portland hardcore group Hostilities will be hitting the West Coast this December for a week of dates following the release of their brand new single “Cornered,” set to release on November 12.

“Cornered” will be the first single taken from the upcoming debut album NØ Cowards arriving early 2022. Tickets for the band’s West Coast tour go on sale Friday, October 15, dates and venues can be seen below. 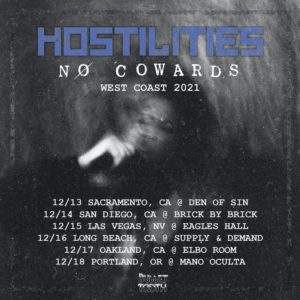 Formed in 2018, Hostilities has made no reservations or concessions for either their sound or their ethos. The goal was to punish and to that, they are no stranger. Having conquered the Pacific Northwest in relatively quick fashion, the band set out to take on the rest of the world.

With soul-damaging riffs and punishing drums, the quintet has set out to tell the world exactly what they expect of it. NØ Cowards, the forthcoming debut LP after freshly minting a deal with Bullet Tooth, will do just that, recognizing the band as a force to be reckoned with for years to come. True to their DIY ethos, the band wrote, tracked and produced the record utilizing only outside help from close friends.

The band is comprised of vocalist Larissa Perrin, guitarist Colton Dodd, drummer Andy Rice, and bassist Jeff Neuman. Ready to flip the hardcore scene on its head and kick its teeth in, Hostilities are poised to head out on an uncharted path leaving a road of destruction and chaos in their wake.