Known for their blend of hardcore and powerviolence, Zulu are pushing the boundaries of those sounds into new territory on their forthcoming album, A New Tomorrow, set for release March 3, 2023 on Flatspot Records.

The Los Angeles-based group have shared the first single “Fakin’ Tha Funk (You Get Did),” a minute-long song bursting at the seams with a heavy dose of reality and the riffs to match it. The video was filmed and directed by vocalist Anaiah Lei and guitarist Dez Yusef, giving a monochromatic look into the band.

On the lyrics, Lei states:

“Everyone wants to be Black, but nobody really wants to be Black. People take from our culture, use our language and, surround themselves with people from the culture which in turn makes them believe they are a part of it. Those that will benefit from it when people in our community are looked down upon for being how they were born.”

A New Tomorrow serves as the band’s first full-length, following EP’s Our Day Will Come (2019) and My People…Hold On (2020). Taking on the task of self-producing the record, Zulu immersed themselves in collaborator Zach Tuch’s (Dare, Trash Talk) studio in the valley. Amnfter spending months toying with different instrumentation and samples, and pulling influences ranging from reggae to death metal, the result is an eclectic 15 tracks. You’ll hear in-your-face breakdowns adjacent to more soulful and jazz inspired sounds, screams making way for beautiful moments of spoken word. Instilling a sense of community and collaboration, the band brought in Soul Glo’s Pierce Jordan, Playytime’s Obioma Ugonna, and Truth Cult’s Paris Roberts for features on tracks.

The connection Zulu brings throughout A New Tomorrow is also apparent at the band’s fun and chaotic live shows, which have been almost non-stop for the past year and show zero signs of slowing down. The band will hit the road with OFF! in December, and the new year will see a run with Show Me The Body, Jesus Piece, Scowl, and TRiPP JONES beginning February 9, plus multiple festival appearances. 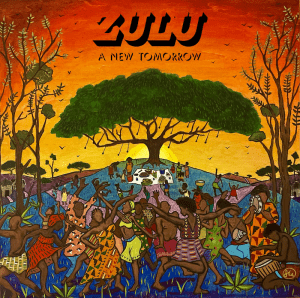 Watch the video for “Fakin Tha Funk (You Get Did)” here: