Of Knowledge And Revelation is the new album of Italian songwriter Nero Kane, due out September 30 via Italian experimental label Subsound Records in double-LP 45rpm vinyl – special and black edition, CD, and digital formats. However, today, New Noise are proud to premiere the new album in its entirety, days in advance.

Nero Kane’s psych dark folk world is intimate, minimal, and decadent. Both in his vocals and guitar style, his European roots intertwine with America’s desert sound in a project full of emotional vision and cinematic flavor. His music has been defined as a suspended and crepuscular journey particularly concerned with death, religion, and love.

Of Knowledge And Revelation, Nero Kane’s third studio album, was recorded near Venice in a fertile collaboration with producer Matt Bordin of Outside Inside Studio and features visual artist, performer and filmmaker Samantha Stella, whose voice has been defined as “evoking the ghost of Nico.” In the last five years, Kane and Stella performed together for Nero Kane’s concerts in clubs, theaters, churches, museums, and art galleries in Italy, Europe, U.K., and Los Angeles. Their live performances have been described as journeys through darkness and melancholy, with the creation of a morbid beauty and an intensity which make them unique.

The newest album was launched by the video for the lead single “Lady of Sorrow” shot by Samantha Stella, who directed also the experimental films for Nero Kane’s previous records, where Kane and Stella are the protagonists. A garden of dried flowers welcomes the preacher Kane in a visionary and circular journey where love and death are exchanging their roles as in a Dante’s circle between Heaven and Hell. A reference to the incipit that introduces the album, an excerpt from the writings of the mystic Mechthild Von Magdeburg, from which the title of the record is taken.

Of the new album, Nero Kane shares: “‘Of Knowledge And Revelation’ marks a new path in my constant spiritual pilgrimage through darkness, fog and light. A journey made of solitude, of rise and fall, in a world that recalls Dante’s Limbo. I love feeding myself with visions, literature and painting in particular. Inspirations came from old paintings like ‘Ascent of the Blessed’ (1490) by Hieronymus Bosch, engravings like Dante’s ‘Divina Commedia’ (1861) by Gustave Dorè, and writings like ‘Tears and Saints’ (1937) by Emil M. Cioran, ‘Hymns to the Night’ (1800) by Novalis and ‘The Flowing Light of the Godhead’ (1250-1270) by German mystic Mechthild Von Magdeburg, who also appeared in my previous album ‘Tales of Faith and Lunacy.'”

A dedicated tour in Europe and U.K. where Nero Kane is accompanied by Samantha Stella on mellotron, organ and vocals, will be launched between October and December 2022 in support of he new record, Of Knowledge And Revelation. 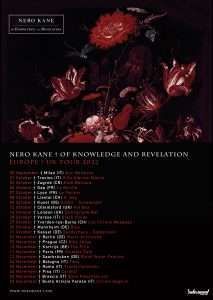 Stream Of Knowledge And Revelation here: