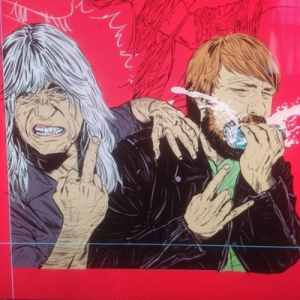 Gina Volpe is forever synonymous with the NYC underground music community due to her co-founding of the hard-edge punk quartet Lunachicks, but there’s more to her body of work than what’s publicly known.

Her accumulated time touring and recording over the years allowed her to harness her voice and songwriting prowess towards a career move in film and play compositions with partnerships with NY-based LGBQTI+ filmmaker and playwright Lola Rocknrolla (credits include the Nefertitty film series and HOMO The Musical) in addition to working in graphic arts.

But when Lunachicks first disbanded in 2001, Volpe occupied the playing void with her own group, BANTAM, who then never achieved the notoriety her then-former group accumulated but cut path within the underground rock circuit with two albums on Volpe’s Heavy Nose Records label and tag team billings with groups like High on Fire, Eagles of Death Metal, Nashville Pussy, among others. BANTAM’s obscurity never bothered Volpe due to the absence of a demanding fanbase or label in their lives, allowing her to write music in a complex and heavier style.

BANTAM’s hiatus in 2006 would see the three members embark on separate professional and personal paths, but 16 years later, they have resurfaced and released their new track “YO-YO,” which New Noise is proud to premiere. The reunion among these three results from efforts appreciated with time, as Volpe rediscovered BANTAM’s music by random chance via Spotify while on the A-Train from Brooklyn to Harlem during a spring evening rainstorm.

The reintroduction to her old work resonated within her and led to an end to the band’s hiatus, a reconnection with her former bandmates Pete Asarisi (drums) and Doug Oosterhouse (bass) for a rehearsal, session lock-in with producer Barb Morrison (Blondie, Franz Ferdinand, LP), and “YO-YO’s” efforts marking BANTAM’s rebirth in the new decade.

Volpe’s groove-riffing brings on YO-YO’s’ pendulum swing rhythm on Asarisi’s command of the battery arm, which alternates between steady, mid-tempo neck swings to a nitroglycerin powered headbanging tempo at dime’s drop. A comeback show in NYC is in the works, Volpe confirms, and all interested booking inquiries can be relayed to info@ginavolpe.com.