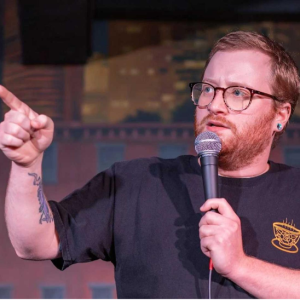 84 Tigers, the new project from members of Small Brown Bike and The Swellers, are coming out swinging with their first full-length, Time in the Lighthouse. The post-hardcore three-piece dish out sludgey, grunge-inspired post-hardcore that is seething with an energy of pent-up aggression that overflows onto the listener. Time in the Lighthouse shows the nature of these musicians, building songs that are explosive extensions of the members, wailing and fighting for an escape, and the end product is this album.

Mike and Ben Reed from Small Brown Bike are the leading figures in this band, making some killer guitar and bass riffs, accompanied by lyrics that are filled with seething rage and vocals that compliment the lyrics, and vice versa. Jon Diener from The Swellers is a force on the drums on Time in the Lighthouse. His rhythm and timing work really well and are probably the best addition to Ben and Mike. They all compliment each other, and how they craft their art is done very well.

Opening on “Kingdom of One,” this slow, bass-led song is a great opening for Time in the Lighthouse. It sets the album up for success, showing you exactly what to expect from 84 Tigers. The opener leads right into the second track “Tides Will Lead,” which is similar in structure and tone to “Kingdom of One” but gives more rhythm in the song. The entire album has great songs that are very similar to each other, yet they don’t get old, which was a pleasant surprise.

“Atlas Fractured” is my pick for best song on Time in the Lighthouse. It’s a passion-filled, ’90s-inspired, post-hardcore banger. Remnants of Quicksand, Hot Water Music, and Jawbreaker can be heard in this song and throughout the entirety of the album. The intro features a guitar strumming by itself until the entire band drop in and keep a simple melody throughout the entirety of the song. The chorus is an explosion, keeping the simplicity of the verses, yet bringing more energy and passion in the vocals and guitar riff. It’s a fantastic song, and one you should put on if you’re short on time.

Time in the Lighthouse is not only a great post-hardcore album, but a great first full-length from 84 Tigers. Each song is filled with emotion and great production that seem to translate well to the band’s live shows. I’m really excited for this album to come out, and even more excited to see what else 84 Tigers has for our ears in the future.

Be sure to check out Time in the Lighthouse when it drops on October 21 via Spartan Records.