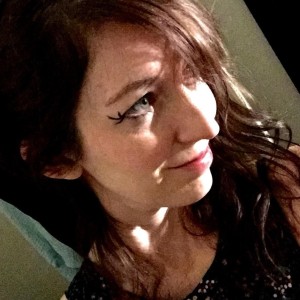 Blackwinterwells is only the most recent moniker of Hamilton, Ontario-based digital musician Madeline Winter. She first carved out a place for herself on SoundCloud as an underground EDM artist known as Drainpuppet, but soon retired that project to pursue her many other interests, including collaborating with other artists, producing, and running the online artist collective, Helix Tears. She kept releasing music as blackwinterwells throughout it all, though, and has amassed a significant following on SoundCloud.

At 26 years old, she is considered a veteran in genres dominated by teens, but has enjoyed helping up-and-coming artists create the music they want to make as a sound engineer. Her behind-the-scenes efforts can be heard on songs by glaive, midwxst, dolly, 8485, and osquinn, among others. Seemingly content with a life in the background, her Bandcamp bio even lists her as a self-professed “sad ghost.” Perhaps unexpectedly, however, The COVID-19 Pandemic led to the rise of blackwinterwells, the solo artist.

Unable to tour, Winter found herself locked in her home mass-producing her own songs. 2020 saw the release of her first two solo albums under the moniker blackwinterwells: Seraph in April and Stone Ocean in October. She released a slew of singles over 2021, some of which have millions of streams on Spotify, and most recently released the four-song Sulfur EP in March, 2022.

Her feature-studded third full-length album, Crystal Shards, is the first to showcase her own vocals in addition to many collaborations with other electronic artists, including dolly, emotionals, saturn, bella lugxsi, and 8485. Her music has historically been referred to as “ethereal emo,” and this descriptor still holds true on this album. Written over the course of two years, it compiles some previously released songs as well as new offerings that take her creative output in different directions thematically.

Opening track “visions” features fellow electronic artist dolly and explores themes of personal struggle over a buoyant looping beat. Winters’ vocoded voice sings, “in this life that I’m living; trying to thrive but the demons aren’t forgiving, like I’m trapped in a prison.” She ends the emotional digression with, “I know when I’ll die cuz I saw it in a vision.”

“Darkkglass” is lively and catchy, featuring a slow, sensual tempo that alternates with a frantic beat. The lyrics are ominous and anatomical, with Winter delivering wavering, buzzy lines like, “all your bones crack like weak plastic,” and the high-octave hook, “red veins from my flesh, just take all that’s left.”

The short-but-sweet third track, “sulfur,” is a dreamy and addictive duet. The vocals are dropped several octaves, which adds to the “low down” theme of the song as Winter sings lines like, “All the times you made me question what I really feel; and I’ve tried to make this right but you won’t let me heal.” The guest feature, emotionals, answers with, “I wanted to know how I let you down but all of my time was spent on the ground.” It’s a beautifully minimalistic song with a simple beat and sparse instrumentation that keeps the focus on the emotionally-charged lyrics.

“Purgatorio” is the ultimate bad break-up song. Winter sings candid lines like, “you broke my heart and all our friends can tell,” “I’d rather just feel nothing than be here in your arms,” and “pretty soon my heart will stop pumping.” She reiterates the relatable line, “I’d rather purgatorio than hell” throughout the song.  We’ve certainly all been there! Guest feature saturn chimes in at the end with several retaliatory verses, including the brutally honest, “take my arms, I mean harm.”

Sitting right in the middle of the album is “vivisect,” which features 8485. This is a cute-but-morbid little duet centered around a live-autopsy metaphor – and is an immediate hit. Over simple but perfect keyboard throbs, 8485 sings, “Someone please come dissect me, come cut me open gently; locate my non-infections, coin names for those in question” and “draw some conclusive findings from the formaldehyde” in a sweet, feminine voice. Winter answers with, “Tell me my heart is beating, absence of rhyme or reason; dying, but lungs still breathing; cut me, I never felt it.” She ends with, “I know that you won’t save me.”

The lyrically despondent “useless” begins, perhaps counterintuitively, with a cheerful intro of video game chirps before giving way to an up-tempo bop about not being good enough. “Cut open my spine, draw out all the life,” Winter begins. She sings the repeated refrain, “You’re so wonderful and I’m worthless; don’t believe in me, girl, I’m useless; I’ll push you away, I can’t do this; wake up every day with no purpose” in a surprisingly direct and optimistic way.

“Cry ice” is another anatomical-focused beauty that explores the aftermath of a failed relationship. Slow and sweet, Winter sings lyrics like, “the fissures in my spine can’t hold onto your vines” and “I’m not afraid of any man or any beast.” The outro is a truly beautiful piece of music, dropping most of the beats to showcase a delicate piano playing while Winter sings, “my love was there you know, but you know you don’t want me now.”

The previously released closing track, “darkkmagician,” is a clear standout song. A plucky intro that sounds almost like a distorted banjo morphs into a burry synth loop, and Winter delivers the addictive, repeated hook, “black glitter, can’t see her; like a ghost disappeared. I’m sinking, through the earth, when you really need a friend I won’t be there.” Background snippets establish the feeling of dissonance she is experiencing (“can’t remember my log-in,” text me back soon, I need to hear from you,” “my heart just stopped again,” “I’m bleeding through my shoes.”) It all ends in a flurry of glitchy synth solos.

Watch the video for “darkkmagician” here:

Crystal Shards is an intrepid album that explores the fall-out of painful personal relationships through imagery showcasing the fragility of the human body. It’s essentially a series of medical procedures seeking to take it all apart in hopes of finding answers. There’s blood. There are spine fissures. There are disembodied ligaments. There are shattered teeth. Hell, there’s even a full-on vivisection!

It’s a new direction for blackwinterwells, who has previously enjoyed creating music centered on fantasy realms in lieu of boring old reality. But the anatomical imagery works well with the vulnerability and honesty of Winter’s lyrics and really makes this album shimmer. There is beauty in entropy and destruction, as evidenced by these glittering shards of broken crystal presented here.

Crystal Shards is released into the void on April 29 via Eyeball Records.

Catch blackwinterwells on tour this summer: