A Darkthrone review is an intimidating task. Not simply because they have a run of three early albums in succession which are beloved and define an entire genre. But equally, because they continued to release albums for the next 30 years. Good albums. Along with these daunting aspects, the band have had changes in their sound and approach meandering through Fenriz’s and Culto Nocturno’s various influences. (Although Fenriz famously denied any influences impacting Darkthrone’s music.) My favorite being the most chagrined by the diehards, the crust punk/D-Beat era (The Cult is Alive, Circle the Wagons, FOAD, Dark Thrones & Black Flags, etc). These forefathers, along with Mayhem, Emperor, Immortal and the other guy, have also absorbed in more ‘heavy metal’, for lack of a better term, into their writing. But through these different sonic attacks, Darkthrone still are lauded; highly ranked and rated for their non-black metal equally as for their strictly defined BM offerings. The haunting duo received staggering applause for their most recent, Eternal Hails, 2021. Now in late, 2022, Astral Fortress is unveiled. This album, out now on Peaceville, is a continuation of the former with Astral Fortress succeeding in their Baltic testimony.

Formed in 1986, Darkthrone emerged with a few demos and then their first album, Soulside Journey, laying an imprint of Norwegian Death Metal. And then when Death Metal got larger and went in a certain direction which offended the ethos of the Helvete crew, Darkthrone bucked the trend and created/helped define Norwegian Black Metal with their following three LPs: A Blaze in the Northern Sky, Under A Funeral Moon, Transylvanian Hunger. As they sat on the throne of the most isolated and secluded from mainstream/fandom genre of all music, eventually (read, inevitably) Darkthrone would rise to become the enfant terrible and endearing magnet of hipsters. With Fenriz stealing the show in 2009’s Norwegian Black Metal documentary, Until the Light Takes Us, his eventual radio show, and various other interviews (bangertv, RockStar video, etc), the duo, ascended into the zeitgeist. No matter how grating or rebellious or anti-everything they are, Darkthrone will seep into blogs and TikToks and memes especially since Fenriz is a sardonic, dismissive, funny bastard. They are captivating even without the church-burning and murder lore of their scene. Instead of their enmity for and refusal of playing live turning fans away, it only adds to the mystique.

This point is not to be petty or superficial, but to point out the dichotomy of Darkthrone, the pulsating conundrum. The pair has embraced the darkest genre of brutality, of isolation and misanthropy. Yet they have a clear presence in the world of music; a public entity. They’re amusing dudes. The visage of Astral Fortress is an ice skater, faceless, genderless, anonymous, skating the cold tundra away from us. The only reference of recognition is the Darkthrone backpatch, exhibiting the aged, revered (and phenomenal) cover of the Panzerfaust LP (1995).

Underneath this cover, in 2022, Astral Fortress exhibits plodding Death Doom and traditional American Doom, interlaced with NWOBHM and classic Metal. The epitome of this style is presented immediately when the opening track (and first ‘single’. Do Black Metal bands have ‘singles’?), “Caravan of Broken Ghosts” arrives then two minutes into the track, a charging riff pushes the song forward. At 7 minutes, the track needs this variety. Well handled.

On Astral Fortress, Darkthrone anchors the middle of the record with a ten-minute dirge, “The Sea Beneath the Seas of the Sea”. This song is a lapping, hypnotic aural wave pattern. Stark and enveloping, “The Sea…” moves in sections. Nocturno’s guitar creeps and then leaps every few minutes traversing into another section.

The referenced hipsters, veiled in demure disinterest, are obliged to review this album to show how cvlt they are. This will commence by flaunting the BM trilogy of obvious. Like pitchfork who “get it” and are in on the joke with Darkthrone; more so than the badge-adorned battle vests of denim clad soldiers who might actually ENJOY THE PURITY of Darkthrone. To be fair, pitchfork nails it saying “they now tend to sound more like a couple of aging pals jamming together.” Again, referring to Fenriz in Until the Light Takes Us saying influences do not creep into their writing, he now notes, “I think since 2016’s Arctic Thunder, we have mostly been inspired by our own back catalogue.”

“Stalagmite Necklace” and “Kevorkian Times” are the buns to the 10-minute burger of “The Sea Beneath the Seas of the Sea”. They are the most interesting and diverse tracks on the record. Not exactly pushing the boundaries of dynamics but gripping and elemental. Nocturmo plays mellotron on “Stalagmite Necklace” giving it an ethereal vibe, enthralling the listener. 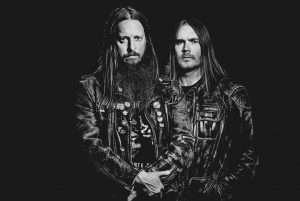 Astral Fortress keeps it raw. Darkthrone keep it savage. They keep it basic without being boring. But, it can be redundant. While I love the fast Crust Punk era, I also happen to love this current stretch of Doom Metal. So, I can fall into the swaying rhythms but do miss the bombastic low end and glorious bass lines and thunderous various toms of normal Doom (plus, reverb and fuzz). Lowest of lo-fi, the production style is snare dependent, eschewing the occasional double kick drum of a few past albums. The instruments are mixed evenly, but the production is as cold and stale as their most beloved BM albums. Astral Fortress was recorded at Chaka Khan Studios in Oslo, the same location used for the Eternal Hails album, with Ole Øvstedal and Silje Høgevold.

But that is the advantage of me reviewing Astral Fortress. I am not going to use the Holy Trinity of those 3 albums from 30 years ago as the sole metric. For jaded automatons, nothing will ever stand up to A Blaze in the Northern Sky, Under a Funeral Moon, Transylvanian Hunger; bookended by next tier classics, Soulside Journey (1991) and Panzerfaust (1995). As with Metallica the diehards will judge all other output. (Although, that’s a poor example because I stand with those who only acknowledge Metallica having released four full lengths.)

Regardless of how much influential bands seep into Darkthrone’s writing, clearly heard are nods to traditional American Doom such as Trouble and Saint Vitus; especially on “Impeccable Caverns of Satan”. This is a meandering track, led on the leash by Nocturno’s guitar line. The riff at the center is gritty and gnarly. The closer, “Eon 2” (yes, a sequel to Soulside Journey’s “Eon”) starts with a riff dripping with NWOBHM feels. Actually, color me crazy, but I hear Heart’s “Barracuda”. In between those songs which are more direct tributes, the music is mixed more with sparks of Poison Idea, Discharge, Bathory, Celtic Frost, Tryptikon, Daylight Dies, and, well, earlier Darkthrone.

The good news is if you enjoyed Eternal Hails this will like a continuation, just more succinct. The Doom inspired expansive Black Metal is ana interesting journey. Mesmerizing and enthralling, Astral Fortress captures a legendary band on their amorphous career. The critics adore it; evidenced by the ratings: Sputnik 4/5; Pitchfork 6.9/10; Metal Injection 8/10; Banger, 4/5; Grizzly Butts, 7.5/10; Angry Metal Guy seems to have not reviewed it or Eternal Hails. But they gave 2.5/5 to 2019’s Old Star which is similar. Metal-Archives has an aggregate of 82% from 5 reviews. Forever favorites fans and the press pool, Darkthrone prove they pander to no one and that freedom of being established allows them to move in any direction. I like this one. 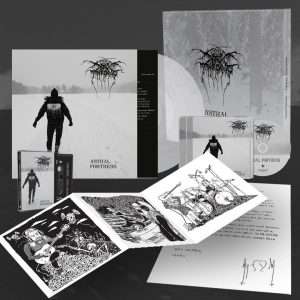