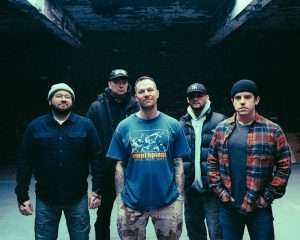 When the (vegan) straight edge metallic hardcore resurgence began to bubble a few years ago, the scene was buzzing. The sounds reverberating the echoes of the ‘90s were connecting nostalgic heads to a stellar time in hardcore history (for hip hop, too).

Kids in their young-to-late 20s (who probably never got to see most of these bands live) were stunningly emulating what would trigger specific memories for those in their upper 30s and 40s. Bands at the forefront nailing the ‘90’s sound extracted the best aspects without diluting or filtering the essence.

Some of the best doing it where/are Magnitude, Ecostrike, Inclination, xRepentencex, Vanguard, Trail Of Lies, True Love, Abstain, and others approaching a more traditional sound but still heavy and angry, such as Forced Order, Restraining Order, Berthold City—OK, you get the picture, as there are a plethora of others. (And that is not even spotlighting the phenomenal UKHC explosion of SXE bands. Or addressing the ones infusing thrash and crossover).

These bands were channeling Earth Crisis, Strife, One King Down, Raid, Statement, Purification, Throwdown, Morning Again, Culture, Until The End, Liar, Congress, and, of course, say it with me, many, many more. The early 2000s still had a wave of this with Seventh Dagger, Blood & Ink, Eulogy, and other labels. But this recent barrage felt that they were harnessing the influence of the ‘90s, SXE Metallic Hardcore, and some direct songwriting and production techniques (Magnitude has Strife covered, Ecostrike, Earth Crisis, etc.), but that each band were executing their own sound. And with that resulting variety, it feels like a wider movement.

Inclination certainly emerged to stand at the top of this pile-on of heralded bands. To much acclaim, they released three savage EPs. Now, as 2022 winds down, Inclination finally unleash their debut full-length, Unaltered Perspective, on Pure Noise Records. While they have always worn their adoration on their sleeve, on Unaltered Perspective, the band are downright flagrant in paying homage to one of the best that ever did it, One King Down.

Not only does the riff and entire beginning sound like OKD’s monumental Bloodlust Revenge, but it boils down to Isaac Hale’s guitar pedals used, e.g. the phaser which pans left to right and another pedal which creates that catastrophic, claustrophobic, tension-filled atmosphere.

“Epidemic” is a killer track and a perfect way to start the album. The album is not simply a clone of Bloodlust Revenge. In fact, the more listens of “Epidemic,” this song isn’t restricted to that base comparison. But those breaks with the lingering warped phasing, it is just such a great doff of the cap to the originators. The dual guitar attack of guitarists, Peter Katter, and Hale paired with bassist Caleb Murphy and drummer Christopher Mills transport a listener 25 years in the past. Congruently, the synchronized foursome invigorate with brutal, fresh ideas.

“Epidemic” itself is a chilling commentary on the Oxy epidemic leaving countless families in its wake. The perspective from which vocalist, Tyler Short, penned this song is not through the filter solely from television news. Hailing from Louisville, Kentucky, Short has seen this firsthand. He again attacks the corporations, pharma companies, and politicians who fund and legislate to propagate the epidemic while standing beside a sobbing family member of a victim offering “Thoughts and Prayers.” The hailstorm of drums explodes as this song begins. Chris Mills is a Chicago drummer from SXE greats such as Harm’s Way, Convicted, Expired Youth, and Few And The Proud. The strength of Mills’ is a necessary factor and the propeller in Inclination’s vicious sonic assault. “Thoughts and Prayers” manifests the anger of the lyrics with an epic breakdown hallway through. The lyrics are penetrating:

Short’s vocals’ impact is deafening. His main verses have that shredding, razor-like delivery a la Rob Fusco. But he can also get low in certain spots as he summons demonic bellows from deep in his soul. His drive for writing stems from hurt, vulnerability, and trepidation are enforced and amplified by his personal suffering.

As Unaltered Perspective advances, the songs start to show a pattern. They are coupled off by theme. From beginning to end, all eleven tracks exhibit a narrative thread. The progression, from the first to the last song, is an internal journey. As discussed, the first two are about addiction and the reasons one (or many) end up with substances as a choice; from the individual to the manufacturers who use it as a weapon to oppress the lower class and the poor.

“Predetermined” and “Bystander” are reflections on addicts and the love they receive and, consequently, the frustration for others close to them, and eventually, the complete gutting that an addict’s death can conjure. “Without a Word” and “Marooned” are depictions of isolation and the internal dialogue simmering within. The next track is in contrast.

“Connections” is a reminder of one’s network during those nadirs and the inclinations to sever relationships. But, ultimately, there are connections reminding one that there is a network of support. And the final songs, “A Decision” and “Commitment” are meant for self-reflection. Shorts and the rest of the band’s decision to walk a straight edge determines a lifestyle which has impacted decisions, jobs, relationships with friends and family. Basically, with each new day, when they awaken, SXE facilitates the navigation of better and sometimes lonely choices.

Inclination are only three years old. Considering that, Unaltered Perspective is staggering based on the musicianship and passion and ferocity which it projects. And while this album sprouted from pain, outrage, and frustration, the personal lyrics are pointed inward. Sobriety helps perpetuate clarity but does not guarantee serenity or positivity. Damaged or confused, one can always utilize the tool to find the right path; a better choice in life and better behaviors which guide every human.

Unaltered Perspective is about Straight Edge. However, the LP is not rife with cliches and chants; slogans and phrases which have been repeatedly drilled into hardcore heads since 1980. This collection of heart felt expressions are not Xerox’d tropes. Lyrically, Unaltered Perspective allows Short to filter the worldwide movement through his singular lens. And while that could sound limiting and myopic, it lends the experience to a wider spectrum of topics than the majority of straightedge records. His personal filter explores geography, corporations, metal health, relationships, self-doubt, and much more.

To continue the straightedge tradition, musically, Unaltered Perspective, gives a platform to Katter, Hale, Murphy, and Mills. The album is sinister in mood; threatening and maliciously heavy. Knowing that hardcore is great on record but ultimately is meant for the live environment, the songwriting on Unaltered Perspective will encourage crowd participation and enhance audience’s venting through a chaotic pit. Inclination surges forth with a brilliant record steeped in tradition and the desire and energy of an adolescent perched to experience a litany of new endeavors.

VINYL:
Pure Noise have a few options, including an orange cassette version.