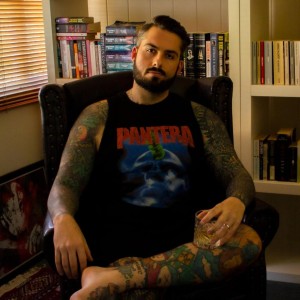 “Dark clouds move closer/ At the edges of my mind/ Obscuring, consuming/ My perception of time,” Brett Campbell intones on “Forgotten Days,” the lead single and title track from Pallbearer’s fourth album.

It’s a line that practically screams ‘This is 2020’—evoking a world stuck in the mire of slow collapse, sinking ever further into a liminal space of profound ‘dyschronia,’ a lack of temporal comprehension and awareness, the sensation of being lost in time.

As Forgotten Days continues, Campbell and fellow guitarist Devin Holt wrap lumbering, smoke-fuelled riffs around bassist and songwriter Joseph D. Rowland’s quaking bottom end. Campbell’s sublime chorus, accented by ghostly synth notes and drummer Mark Lierly’s driving tempo, equates the observation of time to the deterioration of memory, where the “sinister negation” of one’s identity is the cruellest fate to endure: “Is this insanity?/ Will they come to take me?/ Who can I trust with tomorrow? I can barely trust myself.”

Time is the primary motivator explored on Forgotten Days. It is present in both the album’s title, along with four of the eight tracks on offer, acting as the guiding motif for reflections on family and loss. And, thematically, for a group that rose to prominence throughout the 2010s to dominate the doom-metal subgenre, it’s a handsome fit.

By their very nature, doom songs are long, and their riffs are slow; evocative lyrics are often inflected, held, and dilated to emphasize dramatic weight. However, it’s what Pallbearer ultimately decide to do with time that makes Forgotten Days so captivating.

Whereas 2017’s Heartless was a bold foray into the sprawling territory of progressive rock and alternative sounds, the quartet’s fourth LP finds them returning to hallowed ground—more compact, concentrated, and concise than ever before. At numerous points on the record, Pallbearer edge closer and closer to perfecting the doom radio hit with a collection of Sabbathian singles that sit comfortably under the five-minute mark.

“Rite of Passage” is a dark elegy propelled by fuzz and distortion. Huge, down-tuned riffs clash against Campbell’s lofty melodies, as Rowland’s confessional lyrics invite a “meditation on decay,” circling the drain of “a void supreme.”

Tackling the physical process of entropy—a measure of uncertainty or randomness in a given system, often loosely characterized as states moving from ‘order to disorder’— with a “viscous hymn,” “The Quicksand of Existing” makes the most of thick, rumbling passages from Holt and Campbell.

The axe-wielding duo pair harmonized leads with serpentine solos before the track pitches into a screeching decrescendo of suffocating sludge. Elsewhere on “Stasis,” Pallbearer’s affinity for ’70s rock acts like Boston and Blue Öyster Cult continues to shine through, manifested in soaring guitar hooks, warbling synths, and Campbell’s saccharine delivery.

When Pallbearer lock into a groove and march relentlessly into long-form compositions, it feels as instinctive as breathing. There’s a rhythmic chord progression throughout much of “Riverbed” that feels every bit like a mythical force of nature, slowing to an almost interminable crawl in the track’s midsection like the thundering steps of a towering giant.

The monolithic “Silver Wings” is a 12-minute slab of classic funeral doom, where the Arkansas dirge merchants revisit the moody sermons and sparse ambient textures that made their 2012 debut Sorrow and Extinction so enthralling.

In periods of crisis, ruminations on time abound, whether it be through nostalgic turns to the past or desperate calls to safeguard the future—and Forgotten Days is no exception. On the stark “Vengeance & Ruination,” Campbell’s wailing casts our current state of socio-political friction and chaos as an immutable process: “Cries for deliverance/ Echo through halls of pain/ This ritual of violence/ Yet another link in the never-ending chain.”

And, by denying the listener any firm sense of resolution, album closer “Caledonia” channels plaintive yearning into an ontological plea for acceptance: “From the depths of your being, one last moment awake/ From the depths of my being, I’ve never ceased to escape, from Caledonia.”

Pallbearer have always been more than just a doom band. Across their critically acclaimed back catalogue, the quartet have already tackled the crushing and commercial, the soaring and sentimental, the melodic and melancholy. Forgotten Days masterfully achieves all these things and more. It’s a stunning testament to their collective musical talent and endless creative growth, a record that firmly retains their stamp of authenticity without sacrificing urgency and vitality.