International metal fablers THEM are delivering another concept album, Fear City, linking it to their grand, concept omnibus of albums. With Fear City, THEM bring their ongoing story to 1980s New York City. Through their execution of retro-style keyboards and synths coupling with a power/thrash barrage, listeners get whisked to a violent past.

“Excito” is the opening track—a brief intro consisting of old-school synths, wolf howls, news-break samples, channel changing, and a heroic metal groove. It’s in the following rager, “Flight of the Concorde,” that we’re presented with the band’s full ensemble of melodic thrash metal.

Vocalist KK Fossor, also the saga’s protagonist, follows the havoc that kicks off the single “Welcome to Fear City” with a piercing, King Diamond-esque wail. He then proceeds to lay his valiant tones over razor-sharp triplet riffs and catchy chorus lines. Taking the reins, after the spoken-word bridge intervenes is a devilish guitar lead fit for the streets.

“Graffiti Park” is a gangsta little ditty with a slicing breakdown intro. It also carries a rallying-the-crew vibe during its verses. Riding the momentum of its nostalgic keyboard lead, this rude dude is capped by a sample that puts characters on the run. It appears they arrive at “191st Street,” a song welcoming us with NYC subway audio, and terrorize via a catchy hook—think The Ramones’ “Rockaway Beach” but power metal-style.

Speaking of gunplay, blast beats make an appearance in “Death on the Downtown Metro” during the hair-whipping pre-choruses. Adding torment to these sections are more wicked pitch-shifted shrieks by Fossor and whirlwind tremolo riffs by guitarists Markus Johansson and Markus Ullrich. To calm things down succeeding this furious track is “Stay Tuned,” a clear nod to the classic film The Warriors via its mock radio DJ narration.

“A Most Violent Year,” another interlude, comes forth as the most modern sounding on the full-length. Deviating from the central theme, it showcases one of those new-school St.Louis-hip-hop-bounce grooves. Then, the protagonist of Fear City is condemned by a pastor-like figure in the closer “In the 11th Hour.” The main riff of this triumphant piece emanates victory through its dramatic guitar harmonies, synths, and slow tempo. It is dragged out to perfection, accentuating the epicness of the overall tale itself.

You have to hand it to THEM, this album is a riveting Broadway play disguised as a heavy metal record. Immerse yourself in the gory days of New York City when Fear City releases on October 28 via Steamhammer / SPV. 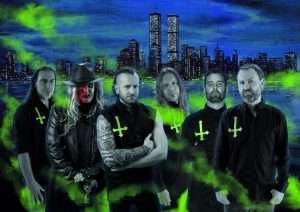