To be frank, within the stoner rock/doom metal/psych genre (and all the tangential splinters) shit can be hard to distinguish. Wash, Rinse, Insert Sabbath riff here, Repeat. But Heavy Psych Sounds usually releases nuanced bands who elevate the formula (along with killer reissues of bands like Nebula, Dozer, Kylesa, The Lords Of Altamont, and more. Oh, and the Doom Sessions series…). Warlung is clearly one of the better bands in existence worshipping at the Iommi altar. Here Warlung return triumphantly with Vulture Paradise. The band has released an LP every couple years since forming in 2016. Kicking up dust in their hometown of Houston, they released their first two – Sleepwalker, 2017; Immortal Portal, 2019 – on their own. Picked up by HSP for 2020’s audacious Optical Delusions, delivering on every aspect that a rock ‘n’ roll band should. Vulture’s Paradise is no different. Letting the performances speak for them, Warlung executes prolific lead guitars, fuzzed out hypno-riffs, clean palatable vocals, and a bomb-ass rhythm section. Warlung’s rhythm section being so in sync is not surprising when it is revealed that it is comprised of two brothers, Chris Tamez (bass) and Ethan (Drums). George Baba and Philip Bennet bandy responsibilities for both guitars and vocals.

And yes. Upon the first needle drop, the aura and music of Sabbath come to mind; especially the trifecta of Vol 4, Sabbath Bloody Sabbath, and Sabotage. Throw in a general NWOBHM feel, heavy on the Witchfinder General (especially the vocals), and then reference musical peers Khemmis and Spirit Adrift and that paints an approximate picture. And of course, throw in some Texas. But Warlung add so much seasoning to their songwriting, they truly do stand on their own. The sum of their parts is unique.

“Hypatia” starts Vulture’s Paradise with a strong, heavy mid-tempo rocker. This track sets the tone and template of Warlung. Heavy and gnarly riffs balanced with high vocals and clean/calming soft parts. The execution of the psych rock is evident in this initial track and foreshadows the band’s increase in this element from prior records. Also, the album cover depicts art which conjures some mystical desert vibe, provided by Meike Hakkaart (Art of Maquenda). The reverb of the second track continues this feel as Warlung ascends up a guitar lead which is magnetic to our ears. More mid-tempo pacing; which seems to be the direction of the first half of the record; while the second half is focused, heavy and faster. “Sky Burial” also reiterates the lyrics alluding to Hell just as in the first. (“My Hell is your Kingdom Come”). We are warned that this record is one of despair and dread. The riff is cool here, needling and incrementally eroding. The halfway mark, 3:00, picks up with a bass lead gallop. Good Sabbath influence as Baba and Bennet push the track forward. A cascade of lead work guides the listener through the rest of the track. 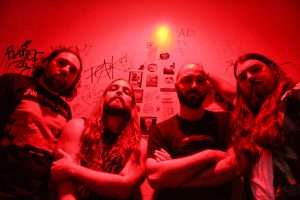 “Vulture’s Paradise” lands in third position. Again, Warlung employ a majestic, sweeping vibe which evokes a sullen feeling. Then, the heavy riffs arrive (and an organ?) to manifest a draining, defeating feeling. This downer is a beauty. Reverb and layered sounds must be extremely stimulating in altered states. Warlung’s six stringers also employ a slide guitar-esque sound which is cool. One of the coolest riffs provided to our lucky ears, also beginning with deadly lead guitars, is the fourth track, “Demonocracy”. I believe I hear some organ in there as well. The tempo mid-song is a volcanic piece of guitar work to get the long hairs headbanging. Then, they again transition to a serene part. The last section is a blustering blues riff worthy of their Houston residence. “Return of the Warlords” charges with a heavy, fast riff and the middle with a mind-battering section of sonic assault. A repeated, snarling section is punishing to the psyche.

when the sun disappears – the return of the Warlords are here”.

I’m not sure if the lyrics are fantasy, metaphorical, or allegorical. But that chunk should convey the tone. Guaranteed to harsh your mellow.

Subject matter is macabre and dark. Fitting that the title track embraces a heavy riff for its foundation but has some spacey bridges and chorus. And that encapsulates the trek through Vulture’s Paradise in its entirety. “Grave Marauders” elicits a straightforward ZZ Top sound on steroids. Bluesy, catchy as heck, balls out, big rock sound. Great tune, all fun. Except for the lyrics which are gnarly and unsettling. Then one third in, a damning opaque break unleashes a burdensome riff which pummels the audience.

The production captures the live setting, the vibe of hanging in a practice room. Smoky, dusty riffs and leads. Vulture Paradise was recorded by Jacob Rodriguez at King Benny’s House of Sound. It was mixed by Jeff Henson and assisted by Jeff Klein at Red Nova Ranch. And then, finally the record was mastered by Alberto de Icaza. Most tracks are 4- 5 minutes; the two longest songs tie at under 6 minutes (5:50). So, not one song stays past its welcome; just in case the doom metal association scares you. In fact, this is much more straight-forward Tejas Hi-Octane, raw rock and roll. And while the sound is deceptively a bumper sticker of description: as in “Bikes, boots, booze, bud, Bud, and broads” on a ’66 Camaro SS, the lyrics are anything but carefree. They are grim; despondent and foreboding. The pain and loss are conveyed by the vocals. This is where the Doom Metal tag relays a true template for a listener’s expectations.

Warlung again deliver a stellar record. Vulture’s Paradise is a high benchmark and an obvious result of focus and labor. They mix sounds and influences which keep every track interesting. The dynamics within those songs also pull the listener, exposing emotional aspects of the individual. Another winner from HSP and a triumph for Warlung.