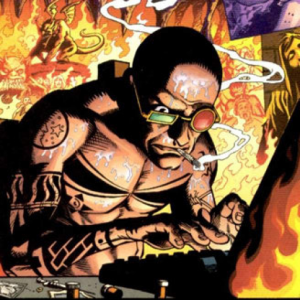 At first glance, the song list that DevilDriver chose for their cover album seems pretty left field. A metal band covering country songs seems like an odd choice. Once the album kicks off with a cover of Hank III’s “Country Heroes,” it all begins to make sense. He is one of the more prominent musicians to straddle these seemingly opposing worlds, and the strength of the song adds legitimacy to the album. It also will appease those who were worried that Dez Fafara would adopt a forced twang. This is undeniably a DevilDriver album.

The album eases into the concept with the aforementioned Hank III song, which is an excellent choice. III’s vocals are eerily reminiscent of Ozzy Osbourne in his prime, adding some depth to the track with the contrast to Fafara’s deep growl. Throughout the album, the band keeps things amped up, although they are not afraid to experiment with the songs.

“Ghost Riders in the Sky” was recorded by many artists, although the Man in Black (Johnny Cash) had the most notable version. In Devildriver’s hands, though, it is hard to imagine that this wasn’t always intended to be a metal song, and the inclusion of John Carter Cash on the track is a great addition.

Their take on another Cash classic, “The Man Comes Around,” also fits the band well. They speed up the tempo a lot, taking the dark tale of the Grim Reaper to new hardcore heights. Lee Ving shows up as a guest on this track, as well as the closer, a cover of David Allan Coe’s “The Ride.” Like Hank III, Ving’s vocals provide a strong contrast to Fafara’s growl, which adds depth.

There are a couple of minor missteps on the album, although that is bound to happen when trying to stretch a concept like this into a full record. Steve Earle’s Copperhead Road falls flat, with clunky, almost spoken, verses. Hank Jr. doesn’t quite have the legacy of other artists covered, like Willie Nelson and George Jones, and is as known more for his friendship with Kid Rock and support of the NRA than his music these days. The awkward cover of his redneck anthem sounds like the kind of metal that Florida Georgia Line would make if they decided to crossover. It is the sole throwaway track on the album.

While cover albums are often just a novelty, this is a strong release from DevilDriver. At its lowest point, this album is still better than the mess that was Rebel Meets Rebel. Those who have grown up listening to these type of songs on their parent’s record players and later in smoky barrooms may appreciate the blending of two very different styles.