“We do this because we are a strong group of friends who love to make music, and because the feeling of people singing lyrics you wrote back at you is better than anything,” opines vocalist Oliver Swift. On the evidence of Day Old Hate’s recently released sophomore EP, First Light, the amount of people singing Swift’s lyrics back at him and his bandmates is going to be on a steady increase. Born from the same musical genepool as fellow countrymen Mallory Knox, Lower Than Atlantis and Young Guns, Day Old Hate load their songs with roaring, satisfyingly chunky rhythmn guitar, bursts of sparkling lead guitar toplines and soaring vocal refrains that feel instantly familiar, in the best way possible. Here Ed from the band discusses their time in the studio, recording First Light…

I feel this time we were actually the most prepared we’ve ever been. The week before we went down to Wales to see our boy Romesh, we actually visited our live engineers’ studio (Dan Mizen, Active Audio Studios) and laid all the tracks down live over 2 nights. This was massively beneficial and to be honest I don’t think we’ll ever look back. It was so good to hear the songs before we even started tracking. When you’re playing in a rehearsal space the songs you’re playing might feel good, but it’s difficult to hear exactly what’s going on. Speaking for myself, it gave me a chance to work on the nuances of my drums parts; trying out different cymbals, patterns etc. I loved it! We also we’re able to work on guitar overdubs, backing vocals and all the things that can sometimes be lost when you’re feeling the pressure in the studio.

We shopped around a lot this time. We always strive to put out the most professional product in everything we do be it the live show, merchandise or our records and for this reason we’ve never been one to just rock up at Joe Bloggs’ local studio. We look at the bands we listen to and respect and find out who they have worked with. The previous year we had recorded a single with Romesh Dodangoda that went really well for us. We were really happy with the sound and it was received well by the general public so it was no brainer for us. Plus he’s an absolute scream! Top banter. 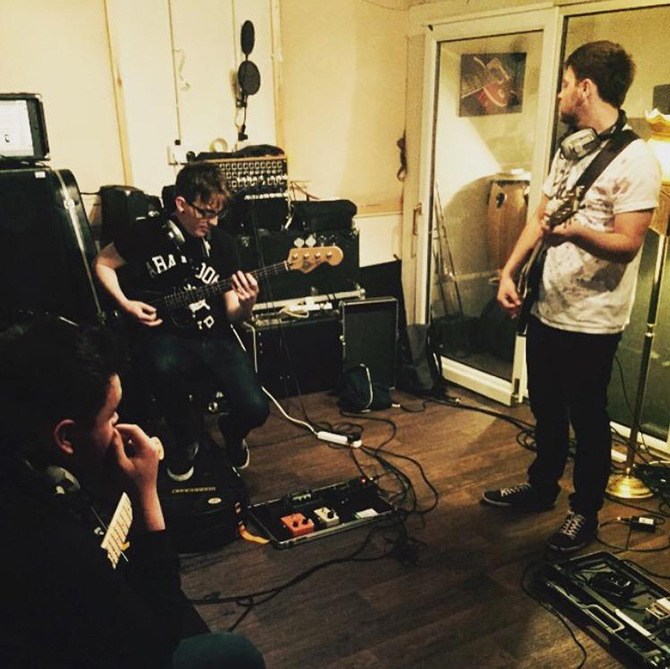 The recording process was really smooth this time, absolutely no major hiccups. I think properly demoing the tracks prior to going down was the main reason for this. When tracking, everything was put down separately. So obviously I went first, and because we had the live demos I just played along to them so we were able to get straight to work. We had the advantage of 2 studios at Longwave so by day 3 when we started working on vocals; Ollie and I could break off and work in the second studio whilst the other boys worked on all things guitar. Longwave offers a wealth of guitar amplifiers so we spent a lot of time experimenting with guitar tones and making sure we had the right sound for every part. It’s really important to us that although the records we put out must be consistent; every song needs to be able to stand by itself. I think some bands find an awesome guitar tone and then use it for a whole album, which for me just makes songs blend into one. I also used a FFAF snare drum, which was a bit of a fan boy moment for me! I think next time I would like to try and record more stuff live off the floor. Whether it is the whole band, or even just drums and bass. Some of my favourite records have elements of ‘live recording’ and I love the feel you get from this. Next time… 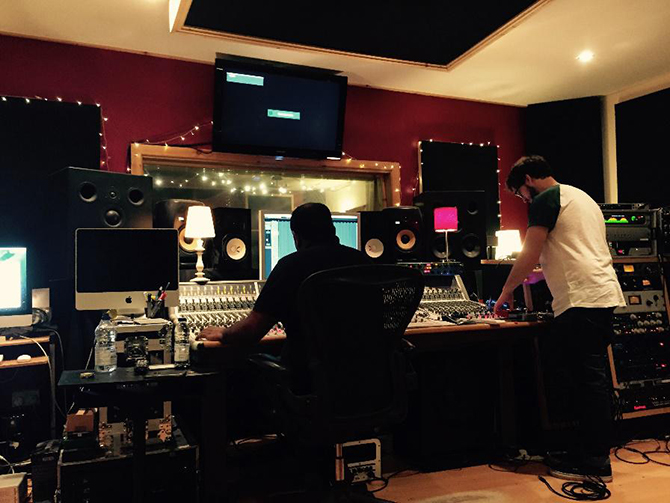 As boring as it sounds, it’s hard to pinpoint anything unusual that happened in the studio, as the whole process was a breeze. We even finished early a couple of days! Romesh worked us hard during the day so there was no need to be in the studio ‘till stupid o’clock in the morning. He told us he’s worked like this for a long time. Bands aren’t massively productive first thing in the morning or too late into the night so we just worked hard when we had to. In drum world we did throw in a couple of curveballs. You’ll hear in the title track some tom over-dubs. I was playing around with these when we did the live demos but wasn’t sold initially. I never like throwing too many bells and whistles into a recording. Don’t get me wrong – I love production! I’m a bit of a sound nerd so I’m always ripping records apart sonically and finding out who/why/how bands recorded stuff in the studio, but it really gets me down when bands go to town on their production and then when you see them live it seems like half the songs are missing. Or there is so much happening on a backing track that the band may as well go home! So we’ve just sprinkled a few things throughout the record, nothing too much that takes away from the songs, just a bit of fairy dust! If you listen carefully on Minutes/Hours/Days you’ll hear some cheeky tambourine work, which is definitely a first for us! On an EP full of firsts…First Light….get it?

I’m so proud of this record. We listened to all the tracks through before we left the studio and they sounded amazing even then! We were literally checking our emails everyday so excited to get the mixes back. It’s great to finally have the EP out there as we have been sat on it for a while. Really excited for people to hear what we can do and come see us play some of these songs out on the road!