Track By Track: One Man Boycott – ‘Counting The Seconds’

Counting The Seconds Track By Track 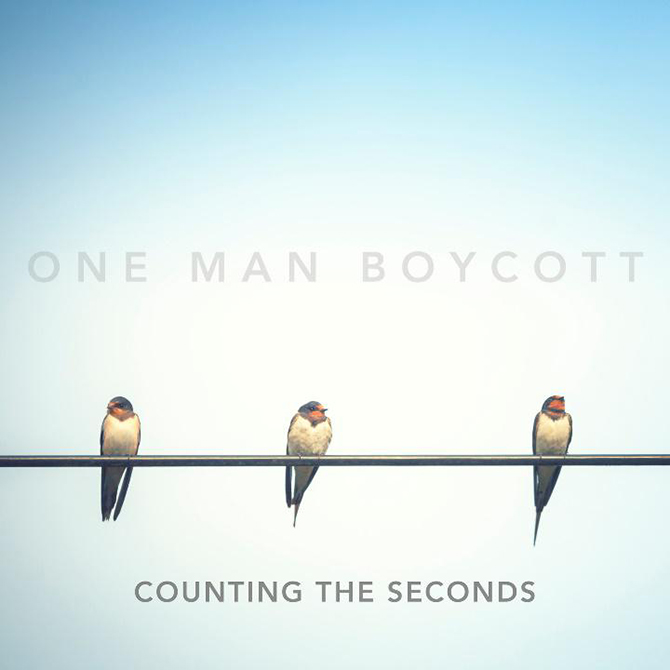 This album feels like it’s been a long time coming, the earliest songs I wrote towards Counting The Seconds go back as early as the summer of 2013! Usually I go through quite a quick process from writing to recording but we really wanted to take more time over this one, making sure we were all happy with every song and we couldn’t be happier with how it’s turned out. Romesh has really made the difference in production too, it’s a big step up for us all and we’ve learned a lot along the way, I can’t imagine what this record would sound like without him driving, we’re very lucky to have him on board. Someone recently told me that our album “sounds like summer”, to me that means big guitars, rhythms that make you wanna move and huge catchy choruses… it’s not far off.

I love this track as the album opener, it just feels, right. I wanted to write a song with a ‘fake’ chorus and I think it really works in S.P.F, when it hits the first “you won’t drag me down” (what is actually a link/break), it really feels like you’ve hit the chorus. This was actually the last song I wrote for the album and it used to be relentless double-kick drum throughout, I’m glad Frank changed that for the snare rolls, it’s not really his style and it’s also way more accessible this way. Although the title is Lewis, Tom and Frank’s favourite things in life, the song is about being unapologetic in who you are as a person, not letting in the negative and just being comfortable in your own skin. There’s a hint of if you believe in yourself you’ll win out in the end. In the chorus I’m pretty heavily referring to myself and two friends of ours (other singers from our home-town) with the lines “we are not fakes, we’re just liars” and “we’re all just boys in the band, sing! We’re all just trying to fit in”. I love singing this live too, I get to be a little more aggressive with it on the delivery of the verses and it’s got an awesome ‘bounce’ to it which always gets the fans moving.

For those of you wondering, this is the song that references Bristol. I started it as a really negative song mentioning all the reasons I wanted to move away from the city, for such a creative city it sure is excellent at sapping all my creative impetus. That said I have to say I did actually really like living in Bristol, just not how I experienced it most of the time, at that time. Somewhere along the way the song did a 180 and turned into a sort of love letter to the city and the last band I was in before Boycott. Bristol is where that all fell to pieces. I was feeling that if only we could be the same band we were before we moved, just in Briz things would have been different. When I took this song to the boys, they changed the structure slightly and Lewis made the guitars feel more driving simply with his style. I’m so glad, it always gets a good reaction when we play it live.

This is a song of firsts. It’s the first song we recorded for the band, as a band. If Only You’d Stay was an obvious choice to showcase to our fans exactly how my solo sound was going to translate into a full band performance. It’s got that instant energy that a single needs, and for us it’s typically catchy as hell. Within a month of having the full line-up in place we went to Wales for two days and got to work with Romesh for the first time. The lyrics are a combination of a few things really (like a lot of my songs). It opens talking about my personal experiences in bands before this one and the relationship with specific people doubting me no matter what, explained in the song by a relationship breakdown. Recently we’ve been opening our set with this one as it’s grown to be a fan-favourite. It’s a great feeling to explode onto the stage with a song that is (considering the life of the band) vintage Boycott. The video to this one was also the first video we recorded as a band, shot in the studio and at our first show. Watch it on our youtube channel.

4. A Monument For A Normal Guy

This is possibly the most serious song on the album. I was sat outside a cafe in Hamburg having breakfast and coffee, idly jotting lyrics down when I realised a few of the lines took a very dark path so I explored it, I’ve never truly written about such a negative subject before so I wanted to see what happened if I followed it. Now we have a song about addiction and cancer as a consequence. The pre’s and the choruses are the polar opposite of the verses though, it is the subjects conscience coming in with a ‘we’re not done yet’ kinda positive feeling, like you make your own ending, so yeah, thats the positive take. I gave the synths for this track (and the album) to Lewis to polish and listening to how it’s turned out, I was a little heavy handed in the demo versions. His guitar work on this one is class too, it was the first song he really got his teeth into and he’s given it a more classy, rock-ballad sort of vibe to what we started with. I also think Romesh changing the impedance of the mic for this one has completely changed the feel, it was a master stroke for me. The vocal sounds really sincere and intimate now, which I like, it fits the track perfectly.

Tom’s favourite to play live. We call this one the ‘jumper’! The tempo and rhythm are perfect to get the crowd jumping to and I like having fun with the lyrics and delivery. Also, the boys tell me it’s probably the most fun to play live too. Liar! is one of the first songs I wrote for Counting The Seconds but it used to be called ‘I’ll Love You For The Rest Of Our Days’. Again I was in Germany, this time at an Italian restaurant, I was alone at a table for two on this beautiful evening in the city, it just inspired me to start writing about a guy and his ex, as if I was there after a breakup. I mixed in some shitty personal experiences and over a large pepperoni pizza this relationship song was born.

This is our ‘hymn’, no it’s not christian rock. I really wanted push my writing and see if I was able to write a decent song without a chorus. Trust me that’s a scary thought for a band that prides itself on catchy sing-along choruses, and truthfully it was on the outskirts of selection for the longest time, but I finally got the bollocks to put it in there a few months before recording. One of my favourite lyrics on the whole album is on this track “but we wrap ourselves in rainbows, knowing things will stay the same”. It’s about both sides of a relationship and the things that make couples strong, the first verse is one sides point of view, the second is the opposite and the third is both together, I also changed the musical approach to each verse to reflect that concept.

Lewis’ favourite to play live. We’re getting a great response from this track and video. We love the song, it’s one that we usually put a little deeper into the set, which makes it a hell of a vocal work out after jumping around and singing for 30mins prior, good job the crowd normally helps! I’ve had the basic version of the lyrics on paper, I guess for a few years now. The topic is pretty obvious, it’s about having had enough of a situation. Specifically when I wrote this I was referring to the ugly side of the music industry, and opening that out to a wider sense of people just being assholes to one another. I wanted to deliver a song that anyone could sing saying they’d had enough, it works for me therapeutically and you can apply it to anything that you’re hating right now, whether that’s work, ‘friends’, teachers, family… anything. It can be a really liberating song to sing if you’re in that shit place mentally. Playing it live I can see that sometimes it’s just a great excuse for people to shout out “I’m so sick of it all!”, just to let it out, and that’s exactly what it’s for.

A swing track! Franks favourite song to drum and probably my favourite purely as a song on the whole album, definitely a future single. Originally the whole song wasn’t swung until we showed it to Romesh and he showed us the light, that seems like an obvious choice now listening back. On the face of it, it sounds like a typical love song but it’s actually about Stockholm Syndrome from the perspective of the obsessive captor. I guess in that respect it is our twisted love song.

The only song on the album that I played guitar on the final recording, the acoustic part is me anyway. I really love how Romesh has my vocals sounding on this one especially, I think I nailed the falsetto parts and Lewis was super sensitive on the lead part too. I remember writing this song the week my nan died, who along with my late granddad played a massive part in shaping who I am today. I sort of just fell apart in the studio singing anything that came to mind one evening and then dug out the lyrics as they are now later on. It’s a very emotional song for me and I can’t wait to share it with people and sing it live.

This song means a great deal to me as it signifies the completion of a journey; starting One Man Boycott as a solo artist and successfully transitioning into the band we are now. It is hard to say what the chorus actually is but probably the ‘woahs’ everyone helps with live would be it. It really is a song to be sung together. The lyrics in the whole end section come from different Boycott songs right back to the first EP I put out; ‘If I Survive,’ so it really feels like coming full circle, the climax of the last three years. I find it difficult to actually sing it when we play this one live, I always nearly lose it in the ending. If you watch the Sick Of It All video you can actually see my bottom lip going at around 3:20, the crowd were so loud that night and we’d finished playing it, they we’re still singing, (that’s massive for us by the way) I just remember thinking how proud I am of what I’ve achieved with my friends.

Purchase Counting The Seconds on iTunes.