Track By Track: Brave Vultures – ‘I’m Not Coming Back If You’re Not Here’

“I try to write to a realist style and cut the bullshit cliches.” says Dom Littler, vocalist/guitarist of Colchester newcomers Brave Vultures. He continues: “My lyrics are about my struggles with anxiety, love and relationships, a best friend recovering from a drug addiction and coming out of rehabilitation a better person.” The band name is derived from the infamous and somewhat controversial photo by Kevin Carter entitled ‘Struggling Girl,’ which depicts a vulture sizing up a starving young girl in Sudan. The EP is the quartet’s guitar driven statement of intent, a first step in a career which Littler and his bandmates hope will save them from the mundanity of real jobs.

With just under a month to go until they release the EP, the band decided to give you a hint of what to expect, in their track by track guide… 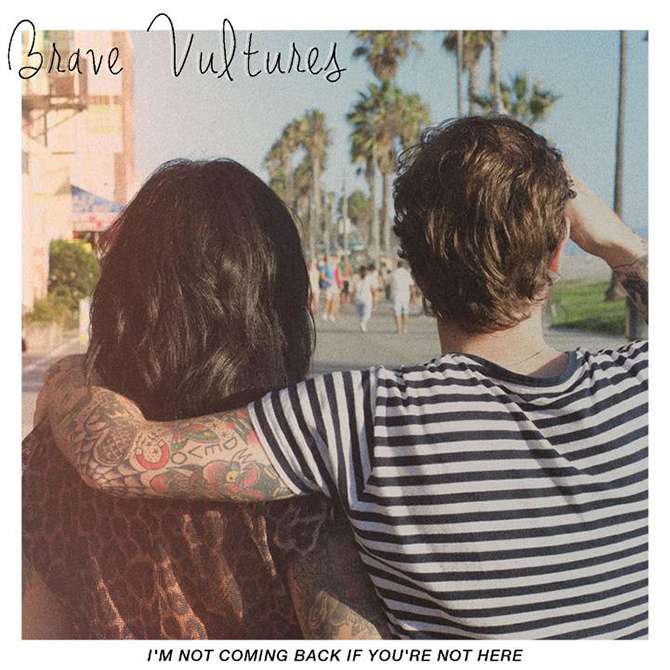 This is the most up beat/punky track we have written, we wrote it during the first few practices as a full band. The track is about when you have a really bad day, anxiety gets on top of you and the only place you want to be is in the safe haven of your bed with the person you love. The inspiration within the melody of the verses came from listening to a lot of old school Offspring records, I grew up listening to The Offspring and they have some great albums that I take inspiration from. Overall I think the song is pretty catchy, short, sweet and a screamer to play live.

This was the first song we wrote together as a band. Like most of the songs I write, it started of as an acoustic song I wrote in my bedroom. The song holds a lot of meaning to me personally. Safe Ground was written about my best friend who was struggling with addiction and currently in rehab for a month. I wrote the song hoping that I could record it and send it to him while he was away to help him through rehab and let him know that I will always be there for him no matter what. Unfortunately I didn’t get to record it in time and he finished his treatment. When he came out of rehab he was a completely changed person, for the better. When we got our first mixes back for the song, I emailed it over to him. He loved it, and he is doing better than ever, I guess he is on safe ground after all!

A song about love and going for a run when you feel anxious. Everyone knows that exercise is a great way to deal with stress and anxiety. Our guitarist Jack wrote the guitar parts years ago in an old project he was working with but it never got used, so we stole it haha. The lyrics in verses talk about wanting to give someone your all but also having an anxious feeling in your stomach that you can’t describe. This track is really fun to play live as when the middle eight drops it tends to get everyone up and moving.

I first wrote ‘With Me’ as an acoustic song in my room about a year ago. The song is basically about a day in the life of me and Jess (my girlfriend). I take her to work, we always do a silly smile at each other before she has to leave, she comes home from work, we have some dinner, listen to some music etc. The chorus is about my everyday insecurities, ‘’i’m always incomplete’ – i never really finish anything I start and I always feel like i could be bettering myself as a person. Its quite a personal song to me, and I also like the reference to the Turnover album ‘Peripheral vision, its one of our favourite albums.

This was another track that our guitarist Jack used parts from a previous project he was working on. This is our most pop punk track, It’s a really fun and bouncy track to play live although it is pretty hard to sing live due to it being really high! I wrote the lyrics about being let down by past band members. ‘’Somethings don’t come back around’’ meaning we aren’t getting any younger and our time is running out. When we recorded this track in the studio we left the vocals to the last day as I was still writing them the night before, that was a pretty stressful time for me, I didn’t want to rush them and write something I didn’t mean. The verses have some pretty relatable lyrics in them such as ‘’my mind is a prison, this is my freedom’’ which means, music is an escape/freedom to my overthinking crazy brain, I guess this is something that a lot of people can relate to.

I’m Not Coming Back If You’re Not Here will be released on September 16th.