The Decline Revisit ‘Resister’ with Track By Track

Perth, Australia skate punk act The Decline recently announced a US tour with Brooklyn’s MakeWar (see dates below). In anticipation of the upcoming tour we asked The Decline to revisit their third album Resister, released in 2015, and give us the details on every track. Pat Decline (guitar/vocals) obliged without having to twist his arm.

Resister kind of has a theme that runs through the whole album about exploring the changes which we all experience in life and the choices you have to make to follow your ambitions. “New Again” is about just really, really fucking wanting to be a band, and the kinda personal tribulations which go along with it.

2. Giving Up Is A Gateway Drug

“Giving Up Is A Gateway Drug” is a continuation of “New Again” and explores interpersonal relationships and the importance of friendship in a band dynamic. If you’re not friends, why are you in a band? It also delves into my own personal grievances with people I’ve met over the years in the punk scene who were just plain jerks and how shitty it is when bands aren’t supportive of each other. Are you stoked when good shit happens to your mate’s bands? of course you are. I am too.

As poppy and fun as “I Don’t Believe” is, this is probably the angriest, most scathing song we have. This song outlines the importance of supporting your musical community over any kind of industry and me losing faith in an old friendship. This is my favourite one to play live (probably) cause Ray gets to sing the second verse, which Cam from Bodyjar sang on the record. Also we made a rad music video for this which is coming out soon and the guys from PEARS are in.

Years ago I used to work checkout in a supermarket. They told me they didn’t want me to take time off to go hang out in Melbourne for a bit, but I didn’t really mind cause the job was shit and I kinda had nothing going on anyway. Then our manager Ross reminded me I couldn’t fuck off to Melbourne yet because we had a show I’d forgotten about so i stayed in town, met a girl, moved in with her and bought a bunch of cats which is pretty crazy cause if I’d actually gone maybe none of that stuff would’ve happened. Ross is a pretty good manager.

Ben wrote this one, so I’ll let him explain it:

Ben: I guess “The Blurst of Times” is a song about trying to come to terms with existential dread and the struggle to find and create meaning in a world that sometimes seems meaningless. Sometimes just expressing how you feel about these things makes everything feel a lot better. I didn’t have any idea what to call it, so in true Decline fashion I got Pat to pick something from the Simpsons.

6. You Call This A Holiday

I’ve noticed in my short experience as a musician and my slightly longer experience as a human that a lot of people filter through your life, some leaving you for better and some for worse. We’ve all got friends who we used to see every day who we don’t really talk to anymore, maybe people come into your life to serve some purpose or to teach you something, i dunno, but I’ve had a lot of mates who were stoked on pursuing music kinda get over it as they got older. This song is about that. We play the fast section at the end live, tacked onto the end of a really old fast song, which I guess is a giant disappointment for anyone who really likes this song.

“Camberwell Street” is in a south-of-the-river suburb in Perth. My Grandpa grew up there, and later raised a family there. It originally belonged to his parents so it’s been in our family since the 1930s at least. After he died we sold it and this song is kinda about letting go of the house but mostly about letting go of him. I lived at the house when I was a teenager for a bit and again in my 20s. Lots of rad bands stayed there like Local Resident Failure, Ebolagoldfish, The Hard Aches, Pour Habit, Hightime and The Bennies.

“Broken Bones” is about one of my best friends having a really, really shitty time and me having no idea what to do. We don’t play this one live and it’s not one of my favourites. The chorus from “Wrecking Ball” used to be in this song but it didn’t really fit the vibe so we had to do some song surgery.

When we play this live I always say it’s about me being in love with Miley Cyrus. I’m not really. But I do like her. I like how she kinda tried to change her “Disney Girl” image and a bunch of people (mostly men) were like “You can’t do this, behave yourself!”, but she was like “fuck you” and I was like “Go Miley”. This song is actually about me getting my life ruined in an abusive relationship.

10. You’re Not The Waitress

I love the show It’s Always Sunny In Philadelphia. My cat is named Charlie after the character Charlie Kelly. Charlie is in love with this character who works in the local coffee shop who is only known as “The Waitress”. He’s like obsessed with her, stalking her, ruining her life, but it’s love – Charlie would do anything for her. Charlie is a creep but this song is about a girl. It’s like my way of saying “You’re not the one” but, it’s “You’re Not The Waitress”.

This one was meant to be a B-side! We had a few spare songs and a little bit of tracking time leftover with drums so we recorded this and another track called “Life of The Party” because they were the shortest. I don’t really like either of them. What I do like about this one is that it’s hell short and I think every punk album needs a 30 second song.

“Underworld Tour” is literally about what it would be like to go on tour in hell. I wanted to do another kinda funny wordplay religious imagery song to follow up our old song “Evolution of Jesus Jackson”.

“Start Again” is one of my favourites. It’s about the juxtaposition of where you begin in music and where you end up. For me the beginning was starting bands with my friends and playing at our parents houses, and pissing off the neighbours and I thought the end was after a really shitty tour where I had pneumonia a few years ago. This is the first full song I wrote for Resister and it was the beginning of the kinda idea about change and ambition that I based a lot of the songs around so naturally I decided it should be the last song. You can always start again, to some degree, whether it’s new place, new members, new band, whatever. You are in control! 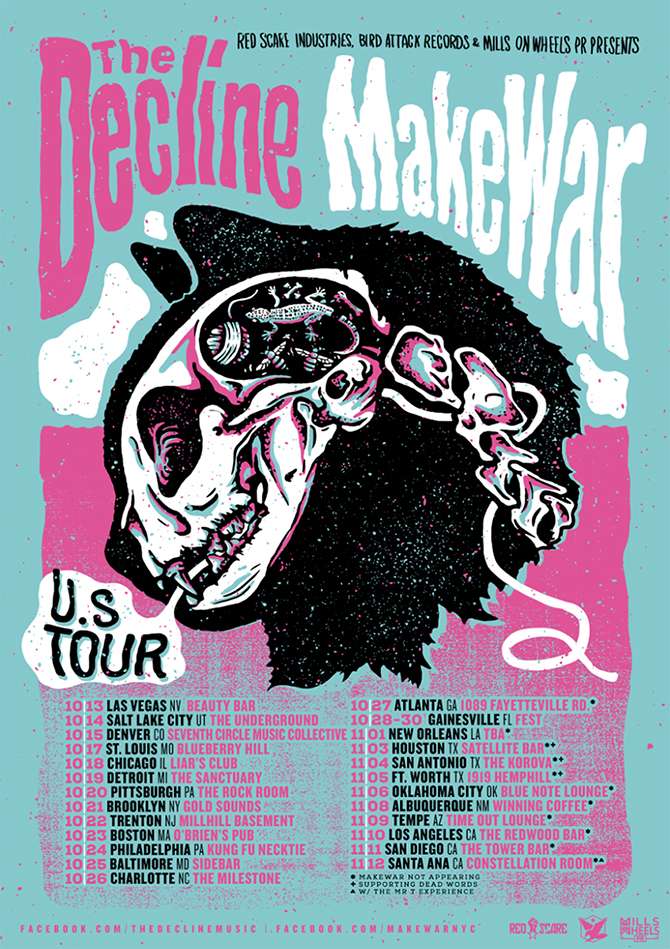