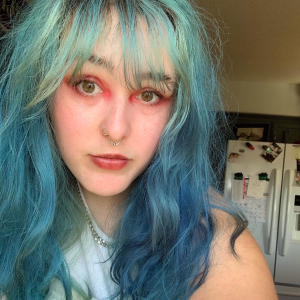 Interview: JIVEBOMB Crash Onto the Hardcore Scene with Enraged Desires

When desire turns into compulsion, where does an artist land? When a primal need to fabricate chord progressions and inciting lyrics grips you, do you rise to the challenge? More pointedly, when a pandemic halts the world, where does a person’s loyalty to art lie in the fray? Thankfully, most musicians figured it out—Start a band.

There is a certain mystique that inundates the slew of pandemic-era bands. Without the draw of live music to tout their abilities on, and no instantaneous feedback from the single-minded entity of a crowd, bands old and new allowed themselves something great: get weird. Experiment. Leave your all on the record because judgment day might just be upon us, but that makes actual critique feel trivial. Most of all, musicians—particularly in the punk and hardcore scenes—reverted back to a grand artistic tradition: not giving a fuck. Baltimore-based hardcore punks JIVEBOMB are a perfect example of creating out of need and heart, not for airs and glory.

Chatting about the formation of JIVEBOMB, vocalist Kat Madeira explains, “It was a pandemic moment. Everything was shut down; you couldn’t do anything. There wasn’t any live music for about a year at that point. And we were all losing our minds together. So we just got a couple of people together and pitched in on a space together, mainly for everyone else to leave their equipment, but also to just play music and write music. And most of the active people in (that space) ended up being JIVEBOMB.”

However, Madeira never planned for these pandemic rituals to become a grounding structure in her life. “I just wanted to know what it felt like to be in a band and write music. I was like, ‘We can play one show, and I’ll get that off my chest, I know what that feels like now.’ And then I’ll just go back to my usual life. But it just so happened that our first show was, like, insane for everyone.”

And so JIVEBOMB beat on, now boasting a deliciously sample-heavy demo and their current hardcore EP Primitive Desires, released October 2022 via Flatspot Records. Alongside Madeira, Ethan Buttery on bass, Harper on guitar, and Mees Fix on drums compose JIVEBOMB. Each song on their EP is granted right around one minute of gut-wrenching vocals, heavy guitar in conversation with the bass, and driving, fleshed-out drums that frame the EP beautifully. Primitive Desires is a masterclass in collaboration. Where one instrument tails off, another takes up the gauntlet, never allowing a dull moment to tarnish the intrigue woven into every track.

When the world stops spinning in the way we once knew, when society feels unheard, and travesty after travesty happen with little to no repercussion, punk and hardcore music tend to crawl their way out from the flames, welcoming everyone in a warm, shrieking blanket of DIY liberation. It’s no wonder there has been a punk renaissance over the past few years. The people have not been heard, so the people are quite literally screaming in the face of oppression. To put it bluntly, the kids are fed up. And hardcore bands like JIVEBOMB are their battle cry.

The raw edges of JIVEBOMB have tickled the fancy of hardcore fans around the country—They are at once charmingly grating and elegantly grisly in their approach to music, having been influenced by the likes of Rival Mob and Negative Approach. For their debut EP, JIVEBOMB wanted to “Give it to them straight, no filler,” Madeira says. Confirming this sentiment, Primitive Desires is an unflinching punch to the gut, no chaser. But if listeners can stomach it, the experience is oh-so worth it.

“Illusion of Choice”—the crux of the EP—makes its entrance with a disgusted growl from Madeira. Presented on a charred platter, the song embodies the rage inherent to the idea of “freedom” as capitalism continues to step on the masses’ throats. The second and titular track, “Primitive Desires,” makes bold assertions through repetition. “Everybody’s somebody’s fool,” Madeira cries at the end, exalting the message of the song to greater levels of understanding—We are all under the thumb of someone or something, most often ourselves.

When asked about what “primitive desires” means to her, Madeira laughs a bit. “I mostly just thought it sounded cool,” she admits. “But also the overarching theme, if there had to be one, is… I feel like everyone experiences some sort of inner turmoil, like an inner battle. It might be different for everyone, but everyone totally experiences something, whether they want to admit it or not. I guess my primitive desire would be trying to figure out what the fuck that (inner struggle) is and what to do with it—Accept it and don’t do anything about it with your life, or decide, like, ‘Damn, I could definitely work on a thing or two.’ But first, you have to figure out what is killing you. What are you arguing with yourself about inside, or what lingers inside that you’re not dealing with? Because everyone’s got something. No one’s perfect.”

Through years of pandemic healing, Madeira spoke about a sanguine pattern arising in the Baltimore scene. At the notoriously raucous JIVEBOMB live shows, where a heavy divide previously resided, a melding of different people and genres now inhabits the pit. Madeira expressed her excitement for the onslaught of femme-presenting people taking over the scene and garnering the right attention—not because they get a pat on the back for being femme in a historically hyper-masculine space, but because they’re just as good if not better than the rest.

“This is such a cool time,” Madeira says. “When we did our run with SCOWL, I was talking to (vocalist Kat Moss) and she said some really meaningful things to me before we kind of parted ways. She was like, ‘Remember not to make yourself smaller. You’re killing it; you’re doing great, but people are going to hate you no matter what because you’re a woman. So that just should not stop you from taking up space.’ And I was like, ‘Damn dude, that’s real.’ With literally anything in the world that’s male-dominated, your gut instinct is to kind of shrink yourself down and not take up space. And that’s so stupid. We’re literally yelling and playing loud music; we should be taking up all of the space.”