Fear Factory have been going strong for over thirty years, built on the bridging the electronic and metal worlds together. It’s that nexus that has helped define the Californians’ legacy, but as guitarist and bassist Dino Cazares notes below, the connection is much closer and more important than most knew.

The band’s tenth album, Aggression Continuum, due out June 18 via Nuclear Blast, helps solidify that Fear Factory are no mere legacy act happy to live out their days playing anniversary tours. This new batch of songs is as potent, powerful, and catchy as anything in their illustrious back catalog.

After going through a tumultuous few years of financial struggle, COVID, potentially losing the band name, and now forging on without famed vocalist Burton C. Bell, Aggression Continuum feels like a triumphant reminder of Fear Factory’s staying power. All that frustration and drama is nothing new for the band and just helped add fuel to their fire, as Cazares notes:

“I guess it’s just our way of expressing all the shit that we go through, through our music. Even from the first lyric you hear on the record is, ‘Imagine your life taken from you,’ and that’s how we felt when the [Fear Factory] trademark was pretty much literally taken from us. Luckily, I was able to salvage it. So, it’s been very tumultuous, these last few years.”

Staying creatively hungry and motivated to improve is no challenge for Cazares:

“My motto is always to try to improve my writing or just try to come up with something a little different than what I did in the past. When you have 30 years’ worth of music, it’s hard. It’s not that easy, but we always managed to come up with some new shit, add in new elements to the songs, and I try to make it as catchy as possible.”

Everything about this new record feels futuristic and sci-fi, and there’s a distinct cinematic element to the songwriting here. It plays out with songs that build and build into this massive, terrifying monster, only to become even scarier after the final reveal. The number of subtle yet significant shifts mid-song is incredible throughout, and that’s been a Fear Factory trademark since the beginning. Cazares appreciates the comparison and even hints at the “monster’s origin.”

“I like that theory that you said that, because I try to make the midsection almost a whole other, bigger song. It fits, don’t get me wrong, but it’s like a whole other song because of the way we start it and build and shift. We go onto the beat; then we’d stop, then boom, it goes again. You really want to know where I learned that from?”

I’ve never been asked a more obviously rhetorical question during an interview; of course I wanted to know.

“You’re going to actually trip out,” he answers. “I learned that from techno bands, how they send off another section of the song. Sometimes they have a long snare roll, and the synth riff is going [wild and then the] beat comes in, and you see all techno fans jumping up and down. That stuff actually inspired me. Actually, you’re probably the first person I ever said that to, to be honest with you, because that’s where that came from.”

“For instance,” he continues. “The staccato thing, also with the stop-start thing, a lot of that came from electronic music and hip hop because they were sampling riffs. I’ll give you an example. Public Enemy sampled [Slayers’s] ‘Angel of Death,’ for ‘She Watch Channel Zero,’ and other bands sampled a bunch of riffs. Every time you sampled a riff back in the day, you can always hear the loop, and you can always hear a stop in between the loop [before it starts back up again]. So, I was trying to copy the [loop] machine, way back. And that’s how I developed my stop-start thing.”

So where did this love of electronic music come from, and how does it help explain why Fear Factory’s music is still so compelling? 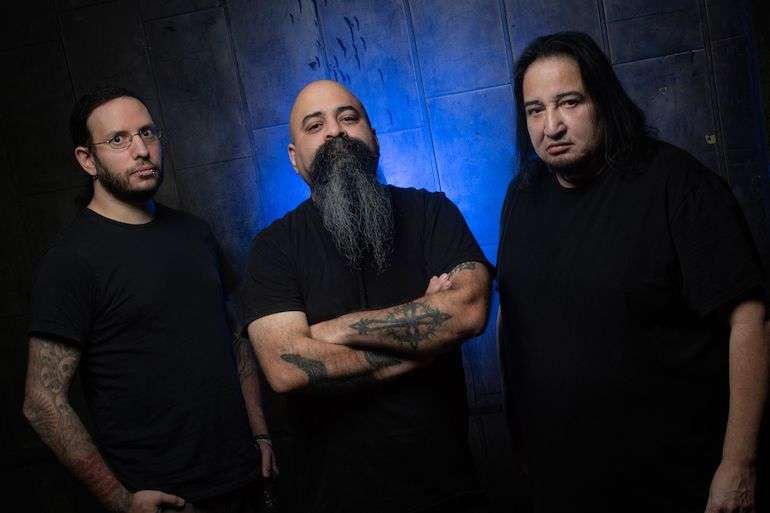 “So, for me it started way back in L.A.,” Cazares says. “I call it the backyard scene because back in the late ’80s, early ’90s, we couldn’t play clubs on the Sunset Strip because they were all dominated by the hair metal bands. So, a lot of the shows that we had to play were backyard shows, in East L.A., South Central Los Angeles, everywhere out there where cops didn’t even bother to fuck with you because there was a big party going on. So, here we are, we’re playing these backyard gigs with about 3-400 people, but in between bands [and afterward] they would have DJs playing techno music. The DJ would take over and play fucking house music, techno, and rave.”

“So, we’d sit around and hang out after our shows and listen to this rave music,” he adds. “I realized, ‘listen to this; that’s a riff.’ Then, boom, that’s what inspired me to write these riffs and do these certain breakdowns and buildups, because you listen to a lot of that stuff, and it’s, they always build up with a snare or a kick. And that’s just, that’s where we developed it from, from techno music.”

A fun exercise is to spent time appreciating Fear Factory’s wealth of classics through that lens, but their roots help explain how their present and future is so bright, as well as how they’ve become so essential and influential.

“To really talk about the new record, you’ve got to talk about the past and how it developed and how I’m still using those influences today on these records that I’m doing now. And all that has a direct influence on how I developed Fear Factory and how I created it into my own unique style, and it’s still being used today.”

Listening to modern metal of all kinds, the infusion of electronic and metal often goes back to Fear Factory, whether these newer bands realize it. Cazares puts it better than I could: