Initiation out now via Napalm Records, is the culmination of an interesting band becoming an excellent one. The Hamilton, Ontario based eclectic rock outfit Sumo Cyco channel all sorts of styles into their first for new label Napalm. In a world full of grim and gritty anthems, the sheer vibrancy of Initiation feels like a drug—it’s like a rainbow of punk/metal/pop bops unlike anything else around. However, there’s no fear of delving into personal and existential darkness, elevating these jams into something special.

Bands who create their own worlds and run with it allow for a unique and integrated creative outlet—it’s also awesome when such a challenging concept is executed so well. After playing around with darkness and trains in previous records, Initiation focuses on four rival gangs and how they intersect in Cyco City. It allows for some fantastic exploration of identity, differences, and the power of unity. Vocalist Sever takes me through the concept and how this record was shaped by the past couple years.

“I’m a huge fan of Alice in Wonderland. My imagination does feel like it’s constantly unfolding the memories of my childhood and adolescence, and gives birth to new seeds of inspiration and hope though the struggles. The idea with Sumo Cyco was always to be an injection of color into a dark landscape, a place to freely experiment in front of an audience. The Cyco City world has slowly been built, music video by music video, over the course of 10 years.”

“Cyco City is like a distorted mirror reflection of our reality,” Sever continues. “It’s how I feel comfortable depicting my struggles. For instance, the giant spider invasion could be an analogy for COVID and fire engulfing the city for climate change. I really do love to live in the spaces between reality and fantasy. The record was recorded both before and after the pandemic hit, and like everyone else, I was affected deeply. Everyone has their own battles to fight in life and I always tend to have a thread of overcoming and empowerment running through all the conflict and despair, almost as a mantra to myself. I’ll write songs that most of the time make more sense in hindsight.” 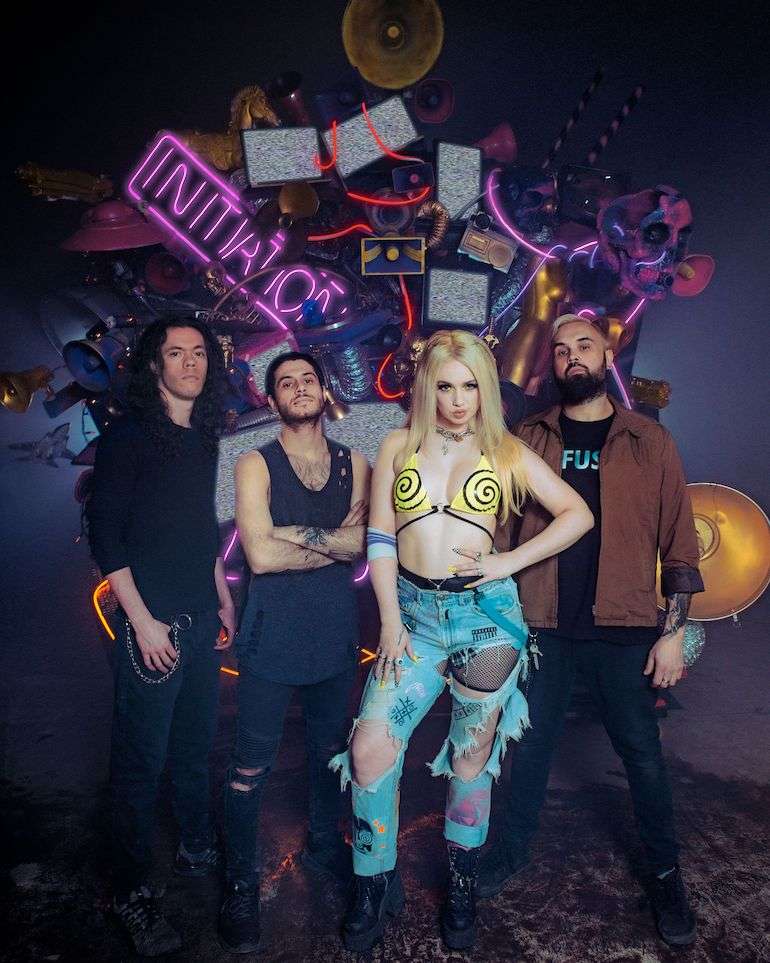 Initiation is a record defined by expertly blended contrasts— bursts of punk, metal, dancehall, electronic pop, and even swing mesh in a delightful musical concoction. The sense of competing goals meeting in the middle is the central theme in Sumo Cyco’s creative world, as Sever acknowledges.

“Our sound is like a jambalaya, and the trick is to add lots of ingredients but still make it tasty. Matt [“MD13” Drake], our guitarist and other founder of the band, and I come from very different backgrounds, and when we write, we clash much of the time. It’s the hitting sweet spot in between us that is the magic moment. It’s an unlikely pairing but we are better and better at pushing ourselves and each other to find the refinement in the chaos. With Initiation, the process of writing started in 2018. It’s not that we intended to take so long to release a record, but we did write more songs than we ever have to curate the best combo we could. When we write, it’s still an adventure, and we don’t quite know exactly where we’ll end up.”

All of this flavor and personality is for a good cause, as Sever is quick to add:

“I really just want fans to know I’m going through the same things they are. The anger, frustration, depression, confusion, and I’ve struggled, but I’m trying my best to keep that magic alive. I see people who have their spark dimmed by this world, because there are so many external factors that weigh you down. I can only hope if I can’t be the one to change hearts and minds, that someone who listens to us will be. Passing on inspiration is one of the greatest things we can do to help each other through dire times. You never know when your spark will ignite a fire.”

Can you take me through the four gangs and what it means for fans? I took your online quiz and am in the “Assassinners” which is both a hilarious name and a very unique, creative way to engage and world build. Given how isolated we all are, having something to connect with is both clever and awesome. How do these gangs play into the story of Initiation?
The word INITIATION also has four letter “I”s to signify the four factions or gangs from Cyco City. Each club has a character portrayed by myself in order to explore four of the many alternate personalities I’ve been feeling over the last couple years. Also, the gangs represent the conflicts between those sides of myself and the conflict between different polarized groups in society. The exciting thing to me is where these gangs intercept with each other and how they interact. I find this can also be applied to the many different styles in our music. For example, one group for the metal heads, the rockers, the punks or pop lovers.

1). Character “Glory” is part of N.S.S., Not Sorry Sorority— A fierce fem side of myself that I think most people assume I’m most similar to. This character is a natural leader and loves social media, fashion, artistic expression and writing lyrics and poems. Her and her sorority sisters can hold a grudge and always look out for each other.

2). Anonymous 9 is the next group, where no character has a name because, you guessed it, they’re anonymous. There always seems to be nine at one time but never the same combination. This group is energetic and rebellious, wearing matching baseball uniforms. They have a hive mentality always following the first person to take the lead. They have a tendency to cause trouble but never mean too much harm, just looking for a good wild party.

3). Malice & Co. represents a family business founded by the lead character, “Mrs. Malice,” who is a badass boss. She’s extremely successful and smart, always thinking one step ahead of everyone else. She rules Cyco City with her influence, money and power and can see everyone’s flaws and weaknesses. She’s sophisticated, organized, and efficient with her time. She’s envied, but also creates a façade, because behind closed doors her family is falling apart. Her skin glows gold due to her product the GOLD pill, which she takes daily.

4). Assassinners are the last group. They started a secret society made up of the skull-headed aliens called “Terrornauts” (terrifying astronauts). They all have brightly coloured exteriors, but the one I portray is Purple (See “Bad News” video for this character as a child & “No Surrender” as an adult). This group are the strangers, the ones in the shadows, different, and ostracized. The secret society is operating to organize and gain more control in a city where they feel like second class citizens. Although some of their actions are quite dark, they also can be quite fun and quirky.

Watch the video for “Vertigo” here: