Interview: Warfather Talk About The Illusion Of Counter Culture In Modern Metal

Interview with Steve Tucker | by Eric May

Coming as a surprise to most people, Steve Tucker’s new project, Warfather, seems to take off from where his days in Morbid Angel ended. But this isn’t anything like Morbid Angel, as it goes into new realms and areas that Morbid Angel never would’ve imagined. The album comes across with a macroscopic force at times, showing that the power of this international act is something to take notice of. Tucker and crew plan to bring this apocalypse right to your door very soon, and you can bet that the sheer power of this one will come like a world-ending meteor right to your face.

Steve, you’ve been keeping this project a secret for quite a long time. In fact, I didn’t even know about it until I see the advert in a magazine a few months ago. All that I was aware of was the Nader Sadek album and the live show recording. Tell me a little about this project and how it came to be.

Nothing was really a secret. There was just nothing to say yet. Anything said would just be hype. I have been working on the material since late 2011, early 2012.  After the work with Nader Sadek, I wanted to have a full band again with a united focus.

Warfather is an international project, so would that mean that you communicate mostly via the internet and record by sending files back and forth?

We did a lot of sending files to each other during the writing, and then we got together and played for about three weeks before tracking the drums. Then the drummer went back to Holland and the rest of the tracks were recorded and mixed. 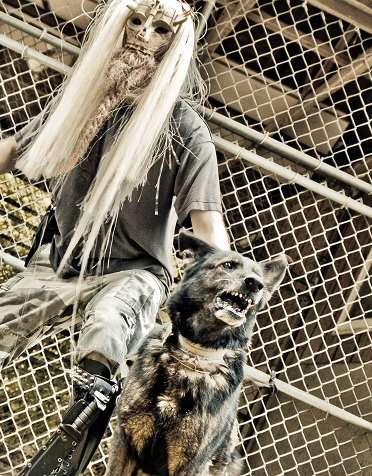 One of the most interesting things about the band is the masked guitarist by the name of Armatura. The internet knows next to nothing about the guy, except for the fact that he’s also from the US. I’ve also got a hunch that this guy might be your own son. Is my hunch completely off?

Man! Actually that is hilarious, how old do you think I am? The man has a beard to his waist! He is not my son, but that is pretty funny though! Don’t expect to learn a lot about Armatura, he is not a very social person. He takes things very seriously and is very intense.

Moving on quickly, let’s talk about the concept of the album. There are some very deep topics on the record (Shifting Of The Poles), yet some that also seem like they could have roots in fantasy (My Queen Shall Not Be Mourned, Waltz Of The Solstice). To put it bluntly, what in the heck are you singing about on this release? And what stands out the most to you, lyrically?

Actually it all ties together. “My Queen…” is a song about legacy, what legend we leave behind, what we are remembered for and what is important in my eyes. “Waltz…” is a song of celebration. People have celebrated the solstices for more years than can be counted. It’s a celebration of the earth and its power, something that people rarely think of these days. These things all tie in to a change, an apocalypse. Each thing affects the others, making a chain reaction. The song that stands out to me lyrically is XII.

I’m definitely curious as to how some of these songs came together. There’s a great deal of technical sections, as well as progressive pieces thrown in unexpectedly, making for an interesting listen throughout. Did you have all of these riffs just lying around in your head, waiting for a project to utilize them on? Does anything on this record have roots in your Morbid Angel Days?

No there were no riffs left from the Morbid Angel days. That was a decade ago! To be honest, I threw a lot of riffs away because I thought that they would be too reminiscent of Morbid Angel.  I truly wanted to do something that could go in any direction, as long as it maintained the dark vibe and the feeling of desperation and anger.

I know you probably get this question a lot. But seriously, what did you think of the last Morbid Angel album, Illud Divinum Insanus? Some people are still freaking out about that disc to this day.

I really have nothing to say about that album. However, fans have a right to an opinion. Regardless, I think Morbid Angel has made a career of doing what they want to do and not being worried about what people think they SHOULD DO.

The record has already released and I’m already hearing a few complaints, which is normal, because everyone’s a critic these days. But what I first started hearing from random metalheads on internet forums were “the album sounds too raw” or “has a horrible production value.” What do you have to say in response to these?

Like you said, everyone is a critic and what I think about this is simple. Everything should not sound the same. That is fucking boring, man! There is no vibe at all, but how can there be a vibe when everything sounds the same? Metal heads like to think that they are a counter culture, that they are different than everyone else. But in reality they are not. They want the same McDonald’s assembly line music over and over…. It is too raw? (Laughs.) This makes me miss the old school even more! Regardless, if it is too raw then don’t buy it, because it probably wasn’t meant for you! The thing is, we had much cleaner mixes and I truly felt they sounded sterile. I wanted nothing to do with them.

What songs on the album are your personal favorites and what do you think would do well during a live performance? Is there any chance of this material being performed live?

I don’t really have a favorite, it is like they are all one song to me and they all mean something. I think they will all be good live and yes we are working on tour dates now.

I’ve also noticed a few small interludes on the disc that seem to involve light instrumentation and electronic pieces. Can you speak a little about these and their purpose on the album?

The instrumentals are really there to keep the flow and help the story along, they are there because I wanted them there. To me they are a breath between the battles.

I never usually ask about photo shoots, but I have to say that when I saw the press photos, the ZZ Top classic “Planet Of Women” started to play in my head. You’ve got beautiful vixens clad in Mad Max gear, preparing for some sort of apocalypse. Tell me a little about these shoots.  And whose house is that? It looks abandoned.

I don’t really know what to say about the photo shoot. We did it in a location that is private. The property is not a place that you would dare go to uninvited. I wanted a very tribal look, a feel of a community and not just a band.  I think we are all preparing for an apocalypse!

Out of all the bands you’ve been in and tours you’ve done, what can you recall as the best touring experience that you’ve ever been on? What was it like meeting the bands that inspired you to play metal in the first place? On the other hand, what was one of the worst experiences that you’ve had on the road? Additionally, do you have any interesting stories considering on the road humor?

I would have to say the best experience I had was touring with Pantera in the USA. That was amazing on many levels; it was great to play huge shows daily as well as a learning experience. Pantera is the most professional band I have ever had the opportunity to play with.  As far as funny stories, I think some have been documented. I know there was a section of a Behemoth home video that was hilarious; I was betting anyone on tour that they could not drink a certain amount of milk in a period of time. Some people took my bet and they all ended up vomiting and I believe some were so ill that they could not play that night. I won lots of money and got to laugh at these guys vomiting their guts up! Win!

What bands are you currently into these days? If I looked in your record collection, what would I find? Anything surprising?

I still stick to what I love, which is old school metal. Other than that the only real surprise might be that I listen to quite a bit of Katatonia. It is dark and moody, but nothing like what I would play or want to play musically.

The new album is called Orchestrating The Apocalypse, so do you think that we’re due for one sometime soon? If so, how will you prepare?

I think that we are due on many levels. I think nature has started to change, weather patterns are changing worldwide and what we call natural disasters are an everyday event. I would say that we have destroyed this planet about as much as it is going to let us. There are also the social issues in the world, with everyone trying to be politically correct while talking shit in private. People are afraid to be different, to give a different opinion. I think this causes much anxiety in people and thus they are becoming more radical, or they are becoming part of the mindless masses. Yes I think we are due, I think many people have life very wrong.

What do you do when you’re not playing metal music? What hobbies do you have?

I have always liked sports. They are the only acceptable form of battle that we have in today’s society and the only place where strength and stamina matter. It sure doesn’t matter while sitting around watching TV or searching the internet.

Finally, what’s next after Orchestrating The Apocalypse? Another Nader Sadek record perhaps or something else?

I won’t be doing another Nader Sadek album. The plan is to do as many shows as we can for the next year then to do another Warfather album. 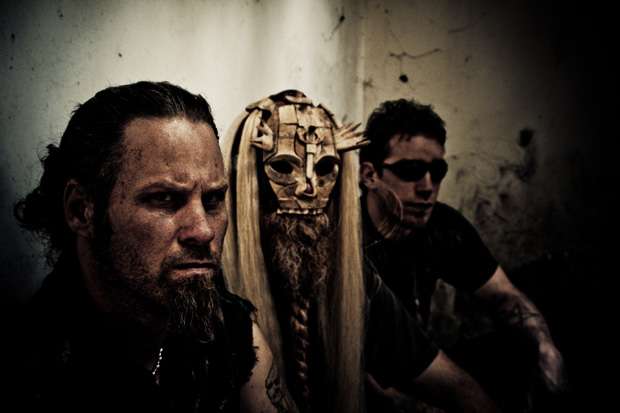