Vampire: Swedish Metal to Sink Your Teeth Into

Interview with Vocalist, Hand of Doom  |  By Jen Canipe  |  Photo by Anders Bergstedt

Vampire is a Swedish metal band that managed to achieve a cult following in the underground metal scene in Sweden…not with self-promotion…not with live shows…but simply by the buzz of fans. Their initial inventory of their self-recorded tapes was gone in a week, and the enigma that is Vampire was born! Now with the backing of metal giant Century Media Records Vampire has unleashed their first self-titled debut. Vampire’s brand of metal is macabre, melt-your-face, kick-your-ass, headbanging insanity! True metal fans should definitely dig Vampire’s precise yet chaotic style. To add to the enigma, the members have pseudonyms…Hand of Doom (vocals), Black String (guitars), Command (bass), and Ratwing (drums). This band is very intriguing and beguiling. I recently had an opportunity to get to know vocalist, Hand of Doom.

So your band, much like your namesake, pretty much rose from the grave and took over. Can you give me a little background on how you came together?

Me and Black String (guitars) got together and started making music without a clear idea of what we wanted to achieve around 2009. We spent a year or two downing beers and switching instruments before Command (bass) came along. Then, we quite instantly found our sound and started writing the songs that are on the demo. We recorded them in April and hooked up with Ljudkassett at the beginning of summer 2012. Almost as soon as the demo was out in the fall of 2012, record companies started showing interest, but we took our time and settled with Century Media in the fall of 2013. At that time, Ratwing (drums) had been drafted as a full-time member, after having played a few shows with us as session member, and we had already come quite a bit into the recording of our first album.

I’m pretty shocked there isn’t another band named Vampire! How did you choose it?

I initially suggested Strigoi, which supposedly is Romanian for “vampire” or “undead.” Then Black String came up with Vampire, and we quickly agreed on that. Quite unbelievably, no other band ever released an album under that name. Us choosing it doesn’t have very much to do with an appreciation of vampire movies/books. Rather, Vampire is one of those simple, effective names that no one will ever have to ask you twice about. I mean, Nyogthaeblisz is a brilliant band, but I still don’t know what they are actually called! Moreover, Vampire sums up what we are dealing with in our lyrics…an imaginative and playful meddling with the dark and the unknown.

So, your names.. tell me a little bit about each of them.

We have taken on those silly names to steer away direction from “who we are.” But I could tell you something about those names instead of the persons behind them. We each wanted something that went well with the brutality and darkness of the music and that suggested a weird randomness (instead of us all adopting names from the Lovecraft mythos or using our initials, e.g.). Hand of Doom is picked from the Black Sabbath song with the same name, and was initially meant as a reference to my writing all the lyrics and playing the drums (handing out doom, as it were). I think Black String took his name in homage to the Root drummer Black Drum. Command is a big fan of the Exciter album, The Dark Command. Ratwing likes aeroplanes.

Vampire made a quick impact in the underground music scene in Sweden without playing a single live show. Do you think it had anything to do with the similar experience of Ghost?

I don’t know what all that was about! Maybe people were attracted to the fact that we didn’t show our faces anywhere but let the music speak for itself. There seems to be a general feeling of information overload among people these days, and I can appreciate how refreshing it is to once in a while stumble across something that is more like a black hole of anti-information than another entry in the tell-all/share-all culture. I suppose Ghost fills a similar need among people. One explanation why the Vampire hype took off quite dramatically was that we consciously released the tape on a label somewhat outside of the metal underground that has listeners/followers from all sorts of subcultures. This means that Vampire were exposed to people who are not jaded with metal, but that actually found our music something of a novelty or even very original, no matter how strange that may sound. You must remember that the metal culture feeds on an endless series of hypes, and of course, there is a big element of chance who gets in the spotlight.

What is your musical influence?

Vampire is a very well organized mess of everything we like and have held dearly in the last 30 years or so of metal. Some band names that we tend to bring up in the rehearsal room when writing music: Morbid Angel, Sarcófago, Possessed, Blasphemy, Sodom, Bathory, Mercyful Fate, Autopsy, Master’s Hammer, Nifelheim and Slayer. That said, I am maybe not influenced, but certainly inspired or even enlightened, by how very mainstream artists like Lady Gaga structure their songs. I would like to think that is something we do very well with Vampire, making proper song arrangements, and that might be an explanation to our relative success in comparison to many similar, less celebrated, bands.

Tell us about the Live Evil festival in London. What is your best memory from that festival?

Having an insanely beautiful woman from Amsterdam saying hello by hugging me and then buying me a beer, which made me feel like Nikki Sixx for five minutes. I must have done something right that night, even though it sounded like sitting inside an exploding bus on stage. Strolling around the autumnally humid London area of Clapton Pond and buying second hand books and records, pleasantly hung over and anticipating the night of the gig, was another trivial but memorable delight.

Tell us about being signed to Century Media Records. How did that come about?

It actually had to do with some guys from their London office checking us out on Live Evil. They had heard the demo and had their eyes on us, but wanted to make sure we delivered on stage and weren’t just some happy-go-lucky bedroom band without live experience. Century Media has been a pleasure to work with thus far. They respect our artistic vision and seem to do their best to get us out there among new listeners as much as possible. People who don’t like us and just want to talk shit about us on the web still sit down and listen to our songs, which means the promotion work is effective enough. 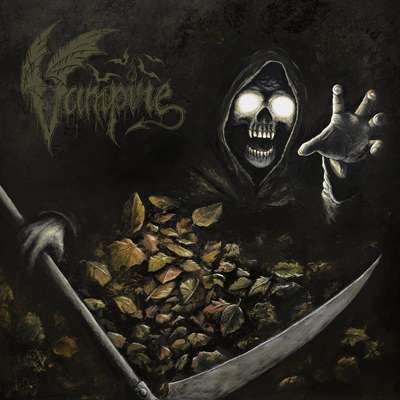 Tell us about the recording of the album. Did it go as you expected?

We put the basics (drums, bass, rhythm guitars and some additional instruments we found on location) to tape in three days in Svenska Grammofonstudion, but spent several times that amount of days for vocals, overdubs and mixing. We actually booked studio time and more or less finished recording before even signing to a label, so we wanted to make sure we didn’t spend money from our own pockets that we couldn’t recoup. That said, there would have been no point laying down e.g. vocals in an expensive studio. If you record very subtle jazz vocals or whatever, the room might be important for the acoustics, but when recording death metal vocals all you need is a microphone that can take a lot of abuse and somewhere to let the signal be recorded, and you’re good to go. Svenska Grammofonstudion is owned by members of the Swedish rock group, The Soundtrack Of Our Lives, and is a veritable goldmine for vintage equipment. You can find just about anything you never knew you needed if you open the right door in that place. The sound effects in the intro to the song “The Fen” is me banging two things together that I found when digging around in the percussion storage room. Black String was laying down some guitars and I got bored. Voila: ghastly ambience!

Why should fans check out Vampire?

We write proper, memorable songs. We celebrate the uncanny atmosphere of good horror fiction instead of just filling the lyrics sheet with incoherent nonsense. We need your money and good sales to get on tour.

Tell us about your tour plans in the US this year.

I didn’t know there were any! We have zero touring plans for this year, not to mention in the US. Something we discovered is that once you release an album on a reasonably big label, people start throwing all sorts of crazy tour deals after you, but if you don’t want to end up paying for playing your own gigs you will have to pick very carefully. Touring the US is something we all would love doing, but the right offer hasn’t come up yet. Going overseas is a big economical risk without the proper back-up and preparations…just look at our friends in In Solitude who got themselves into a real mess of a situation on their last visit to the US.

What band would you most like to tour with?

One band that pops up in my mind is Necrophagia. It would be cool to hang out with Killjoy and watch all sorts of weird horror movies in the bus and really float around in their macabre, eerie world for three weeks. We have much to thank Necrophagia for and at least for me they are a massive source of inspiration, especially the album, Holocausto de la morte. Gore forever!

What kind of music do you listen to? What is one song on your ipod that you hope no one knows you like?

Closest to my record player right now is some stuff with Cultes Des Ghoules, Mortuary Drape, Grave Upheaval, Wrathprayer, Sextrash and Zygoatsis. I come from a black metal background, and that is still the kind of music that interests me the most. The first black metal record I ever heard was the Dark Funeral EP, which sounded extremely chaotic and violent, yet at the same time oddly melodic. I guess much of my black metal listening aims at re-creating that moment of instant fascination with something you just really cannot grasp. I have very few songs in the mp3 player of my telephone, and all of them are quite “true,” sad to say. But I do have a playlist on Spotify that I used when DJ’ing last summer at a bar in Gothenburg, where there are all kinds of probably quite unexpected music coming from me, like Beach Boys, Fleetwood Mac, Daft Punk, Laibach, The Moody Blues, Jens Lekman, Chris Isaak, The Gun Club. I have a rather wide taste of music, and for a few years, I focused away from metal almost entirely, but I always seem to be gravitating back to where I come from, which I am glad for!

What is your favorite vampire-related movie?

The Swedish original version of Let Me In is very, very good and worth seeking out if you appreciated the American remake. One film that I wouldn’t necessarily say deals with vampires, but that has “vampire” as a plot keyword on imdb.com, is Let’s Scare Jessica to Death. Very bleak and atmospheric mystery horror from the early 70’s, with some of the best score of the genre. Genuinely haunting!

What would you like to say to your fans?

Listen very closely to Vampire and you may be rewarded. It’s a bit like playing ‘Castlevania II: Simon’s Quest.’