Against Me! Release “Crash” Music Video

Celebrated American rock band Against Me! have released a brand new music video for “Crash” taken from its highly anticipated forthcoming studio album titled Shape Shift With Me. “This was one of the most difficult videos we’ve ever made because it was filmed in outer space,” said drummer Atom Willard. “The time it took to get there alone was enough to make some bands back down from the challenge, but we really believed it was the only way to fully realize our vision.”

Directed by Jason Thrasher and actually made possible through the kind generosity of the 40 Watt Club in Athens, GA who let the band film on location, the video for “Crash” can be seen below.

Being released on the band’s label Total Treble (in partnership with INgrooves) and serving as the follow up to the critically acclaimed Transgender Dysphoria Blues, Shape Shift With Me is now available for pre-order on Amazon (LP, CD) and iTunes where instant downloads of album tracks “333” and “Haunting, Haunted, Haunts,” a song Rolling Stone recently deemed “a rollicking, swaggering stomper,” are now being offered for those who purchase the album ahead of its Friday, September 16 release.

Additionally, the band has announced its upcoming North American fall tour dates that will both include headline appearances and dates with Bad Religion and Dave Hause. A full listing of dates can be found below with tickets and information on Against Me!’s official website, www.againstme.net.

Frontwoman Laura Jane Grace recently announced the release of her upcoming memoir titled TRANNY: Confessions of Punk Rock’s Most Infamous Anarchist Sellout. Set for release on November 15, 2016 through Hachette Books, TRANNY is a searing account of Grace’s search for identity and true self. The highly anticipated book also reveals the struggles and victories that the artist experienced in her quest for gender transition. Written with Noisey editor Dan Ozzi and illuminated by Grace’s never-before-published journal entries reaching back to childhood, TRANNY is an intensely personal and revelatory look inside her struggles with identity and addiction. Grappling with everything from sex, drugs, failed marriages, music, and soul of a punk rock star, this memoir paints a vivid portrait of one of the most revolutionary transgender icons of our time.

Recorded, mixed and engineered by Marc Jacob Hudson (Taking Back Sunday, Saves The Day) at Rancho Recordo, Shape Shift With Me, Against Me!’s seventh full length album, has the distinction of the first album frontwoman Laura Jane Grace has written truly from the heart, with no metaphorical cloaks cast over the lyrics. It’s an album about love, that deceptively complex emotion we all struggle with yet has somehow eluded most of Grace’s songwriting for the past 20 years.

“Tons of people have written about love. But while love is cliché, it’s infinitely relevant,” Grace says. “For me, having always been in a punk band that was expected to be political, I never felt like I had that option to write about feelings in that way. That’s what I ended up being drawn to this time. It’s writing in a way I thought I could never write before, and not giving a shit about expectations.”

As such, Shape Shift With Me is a loose concept album about traveling the world and falling in and out of love, with Grace serving as the narrator. But even though she was opening herself up to new songwriting topics, she knew what her mission was from the start.

“Is there a record that is about relationships from a trans perspective?” she asks rhetorically. “There needs to be more records about trans rights and everything like that, but feeling like I already did that, I wanted to move on to write commentary on living from a trans perspective. I wanted to write the transgender response to the Rolling Stones’ Exile On Main St., Liz Phair’s Exile In Guyville and the Streets’ A Grand Don’t Come For Free. All those records are relationship records. There’s been an infinite amount of records talking about what love means from a cisgender perspective. I wanted to present the trans perspective on sex, love and heartbreak.”

With Grace’s new motivation came a new outlook on the band, as well. Previous albums found the songwriting process to be a largely solitary experience, but she embraced the spirit of collaboration forShape Shift With Me—so much so that when Cody Votolato of the Blood Brothers sent her some demos of songs he was working on for another project, she became inspired and ended up co-writing “Boyfriend” and “Norse Truth,” two of the album’s most memorable tracks, with him.

“It was just about opening up to whatever comes my way karmically,” Grace says. “Whatever everyone in the band is willing to offer, I just wanted to be open to it. I didn’t want it to be like what it was in the past where it may have felt closed. I want it to be different.”

In a career already full of classic punk records, Shape Shift With Me feels like the definitive Against Me! album—it’s poppy and catchy (“Rebecca,” “Suicide Bomber”), aggressive and in-your-face (“ProVision L-3,” “Dead Rats”), sentimental and longing [Crash,” “All This (And More”)]. Moreover, it’s the culmination of four years of existence as Laura Jane Grace—there’s no going back now, so she might as well embrace it.

Against Me! will be making the following North American headline appearances as well as touring with Bad Religion and Dave Hause this fall. Dates below with more headline shows to be announced soon. 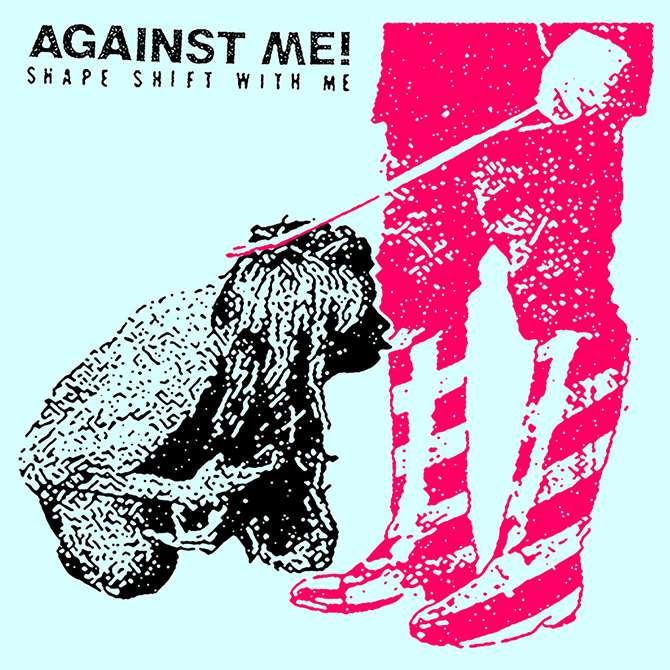