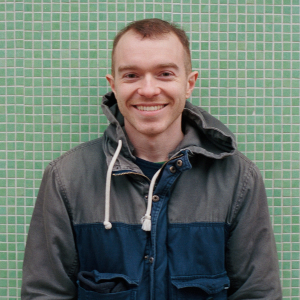 “It’s always been this joke that I rip off all my favorite bands,” says Alien Boy’s Sonia Weber. “Instead of just shutting up about it, I immediately tell everybody.”

More than most, the Portland emo-gaze project wear their influences on their sleeve. The band’s name comes from a track of the same name by Portland icons The Wipers. Another track on that same album became the inspiration for the title of Alien Boy’s sophomore release, Don’t Know What I Am, out August 20 on Get Better Records.

“It’s something that’d be able to fly under the radar if I could just shut up, but I won’t shut up about it,” Weber says.

Alien Boy’s music, however, would be hard to pigeonhole back to any one of those influences. The band set themselves to a consistent agenda of emo-tinged lite-shoegazing. Weber, previously a drummer and bassist in pop-punk bands, took early songwriting direction from acts like Tigers Jaw and Joyce Manor and then incorporated a guitar style inspired by The Smiths and The Cure. Like all those bands, Alien Boy’s songs lean heavily into emotional expression and vulnerability.

“[I] always want it to be over-the-top,” Weber says. “Unless it seems extremely dramatic, I’m not interested.”

A well-received EP and full-length record turned Alien Boy into DIY darlings. Don’t Know What I Am marks a subtle maturation of their sound. The grungy tinge of their earlier releases picks up a slight gothic bounce now. “How Do I Think When Yr Asleep” pumps through a gloomy fuzz. “Something Better” revels in a new-wave, instrumental intro. “Memory’s Vault” pushes toward woozy shoegaze.

With COVID squashing Alien Boy’s original plans to record in April 2020, Weber had time to reckon with the songs. What initially acted as a creative and emotional drain eventually allowed for improving upon and refreshing the music. The time away from shows had an unexpected benefit of letting her escape vocal anxiety and find new appreciation for her songs.

“When we went to go record them before, I was kind of like, ‘Does this suck? I think that I hate these songs,’” Weber says. “Then I had enough time apart from them, where I was like, ‘No, I think that these are some of the best songs I’ve ever written.’ We just went into it way more confidently.”

After writing extensively about a breakup on 2018’s Sleeping Lessons, Don’t Know What I Am finds Weber considering who she has become outside of that relationship, as friends have moved away, and the effects of generally settling into adulthood have sunk in. Lyrically, it’s an album that spends more time searching than answering.

“That’s what it is,” Weber says. “Just feeling super intense about the world continuing to move around you, and growing up, and having people that were in your life not be in your life anymore.”

Take a listen to Don’t Know What I Am here:

For more from Alien Boy, find them on Facebook.